So there I was, just a mile from my house when I felt the vibrations. After a few seconds, I decided to pull over and see if I had a flat tire. I went around the car, but all four tires seemed normal. As a precaution, I walked around again and checked the lug nuts by hand. As far as I could tell, those were okay, too.

I gingerly pulled back out into the road. The vibrations returned as soon as I got above 40 mph. It felt like I had a metallic flat tire, if that makes any sense. The sensible thing to do was pull off again and check all of the wheels. I was coming towards an intersection with a strip mall, so I started to pull into the center turn lane to turn left. Maybe I forgot to tighten–BAMM!

I hit the brakes but the car wasn’t slowing as it should. Out of the corner of my eye I could see debris flying from my car. THUD! Now I lost my steering. Something black and round bounded away from my car as I focused on staying in the center lane.

The round thing was my wheel and tire and it was headed towards two on-coming vehicles. BAMM! Another gut-wrenching noise as the wheel hit one of the cars and bounced back towards me. BAMM! It must have hit the side of my car, I thought.

I could see in my mind’s eye my front fascia being scraped to bits as it rubbed on the asphalt while I was trying to stop the car. Sparks must be flying from my brake rotor, which I was now driving on.

After a tense few seconds, the car finally stopped. My foot was still hard on the brake as I slowly regained my senses. Did my wheel really just fly off my car?!?

I got out of my car and let the cold November air clear my racing mind. Sure enough, there’s my left front tire sitting in the center lane behind my car. I went to retrieve it and saw three lug nuts lying nearby. I grabbed those as well. The lady from the SUV that my wheel hit was yelling at me, telling me I gave her a flat tire. As if I had intended to do that to her. I told her to go call the Oakland county sheriff.

My mind slowly went back to real time as I called my wife. I asked her to bring a hydraulic jack and my bag of tire changing tools after explaining what had happened. She thought for a minute and asked, “You changed my tires last night, too. Is my car going to be okay to drive?”

My priority at the moment was finding the other two lug nuts.

I walked back to the SUV to see the damage. The tire rubbed against the body a bit, but no bent metal. It must have hit the side wall of the SUV’s tire, breaking the seal and causing a flat (the “Todd theory”). On the way back to my car, I scanned the road and shoulder looking for my missing lug nuts. I actually found them both.

My wife brought my tools and I had her call the sheriff for me. They got there within 10 minutes.

So there was my car sitting in the center lane missing a wheel. The front rotor was resting on the road. The fender was damaged, probably when the wheel popped out. The wheel glanced off my rear fender after hitting the SUV, rubbing the paint a bit. Otherwise, the car was okay.

I was trying to figure out how to jack the car up, as it was sitting so low. I used my car’s jack by the back wheel. It was low enough that it would fit. Once the car was high enough, I could get the hydraulic jack under the body by the front wheel.

Cars were driving carefully around me as I was jacking up the car. At one point I was painfully aware that a white Mitsubishi Lancer Evo X was slowly driving by. I could feel the Schadenfreude oozing from his blacked-out windows. I ignored him until I heard the roar of his modified exhaust speeding off. Can’t we all just get along? 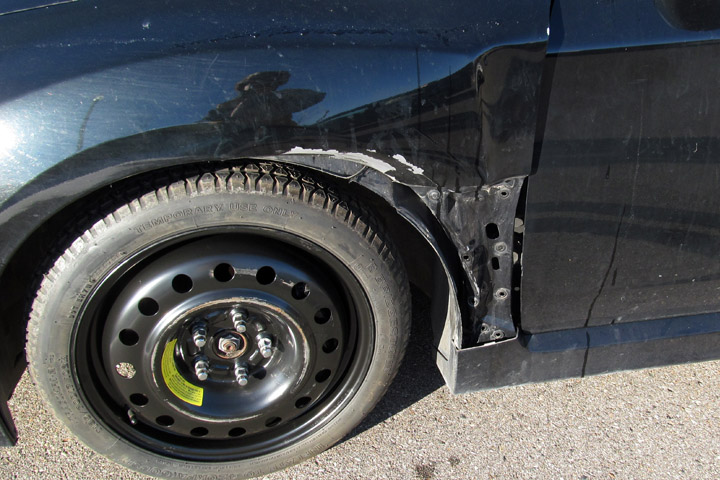 I wish I had taken a picture of the car sitting on its rotor
so I can frame it with the word “FOOL” across the top.

In Malcolm Gladwell’s book Outlier, he says that in a typical airplane crash, there are at least seven consecutive human errors that lead to the crash. This is similar to what happened with me, although my consequences were less severe. (I was lucky—this could have been much worse.)

I had just switched to winter tires (because you should) the previous night. I changed my procedure for tightening my lug nuts after swapping my wheels, which apparently confused me. Then there was the big mistake itself, not tightening any of the front driver side lug nuts. I also skipped my procedure of driving around and then checking the torque on all the wheels.

I made the right choice by stopping initially on that fateful day, but then missed the actual issue. Normally I would have brought my torque wrench with me on such a trip, but I didn’t. I thought about using the lug nut wrench from the car to check the lug nuts, but that was too time consuming (translation: I was too lazy), as I was in a bit of a rush. I also mis-diagnosed the problem, thinking it was the tire and not the lug nuts.

I was also rushing a bit, as I winterized three different cars the day I changed the tires.

“Experience is the name everyone gives to their mistakes.”
—Oscar Wilde

I mentioned previously that the government doesn’t believe in accidents. It calls them crashes because they are due to poor judgement or mistakes, which appropriately describes my incident.

Finally, the traffic ticket I received was for being a doofus. It actually said “impeded or obstructed traffic,” but that is just police code for, “doofus.” I’m not offended—I’m apparently an excellent example. At least the sheriff didn’t give me any points on my record. I just hope this doesn’t become a habit. However, I may put the Oakland county sheriff on my speed dial.

And that, my dear reader, is why we check lug nut torque as part of the tech inspection at the track for high-speed driver education events.

“We learn from failure, not from success!”
—Bram Stoker, Dracula

“I never make the same mistake twice. I make it five or six times, just to be sure.”
—Sum Wize Gye

This is one of my automotive nightmare scenarios—losing a wheel while driving (cars flying off bridges is another one). And now I’m gun shy. Every vibration or noise coming from the tires petrifies me. Am I about to lose a wheel again, or is that just a bad road? And if you know Michigan roads in winter, you know that this is a constant issue for me. Even as the tire noise changes from one type of surface to another worries me.

I notice every vibration from the seat, the gas pedal, or steering wheel. I hear all kinds of things from my car, both real and imagined.

It’s amazing how a mishap like this sharpens your senses.