The story starts off in Italy back in May 1999. My friend Luca invited me to drive from Regensburg, Germany down to Genoa, Italy with him to visit some of his relatives there. I said sure, as long as we could swing by Maranello and visit the Ferrari factory (another mediocre story for another time). So armed with my little point and shoot camera, I started snapping pictures out the car window at the landscape.

Fast forward twenty-one years later to May 2020 and I’m locked down in a pandemic. I don’t bake bread or plant gardens, so I’m in my basement scanning film negatives instead. That’s when I re-discovered my pictures from Italy on that trip.

One picture was of a double-decker bridge. I wanted to geotag it, but I didn’t even know which autostrada it was on. As I searched for it, I discovered that there were a number of YouTube videos of people driving on different autostrade. I don’t remember how many I watched, but I loved them all. Unfortunately, none of them had this bridge on video. 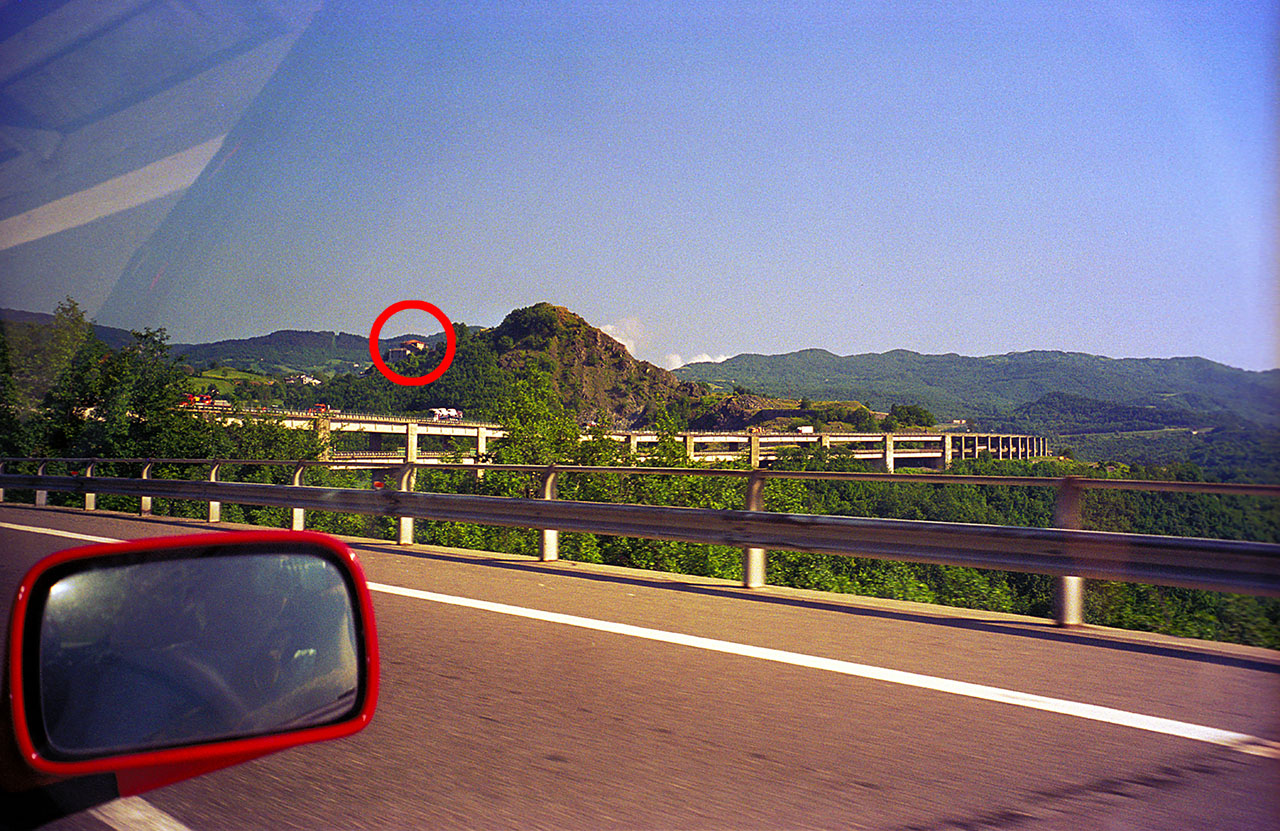 This is the Viadotto Antonucci on the A15 autostrada near Rocca Prebalza back in 1999. I learned that this bridge was torn down in 2003, which is why I had a hard time finding it. I guess Italians only keep Roman-built bridges around? 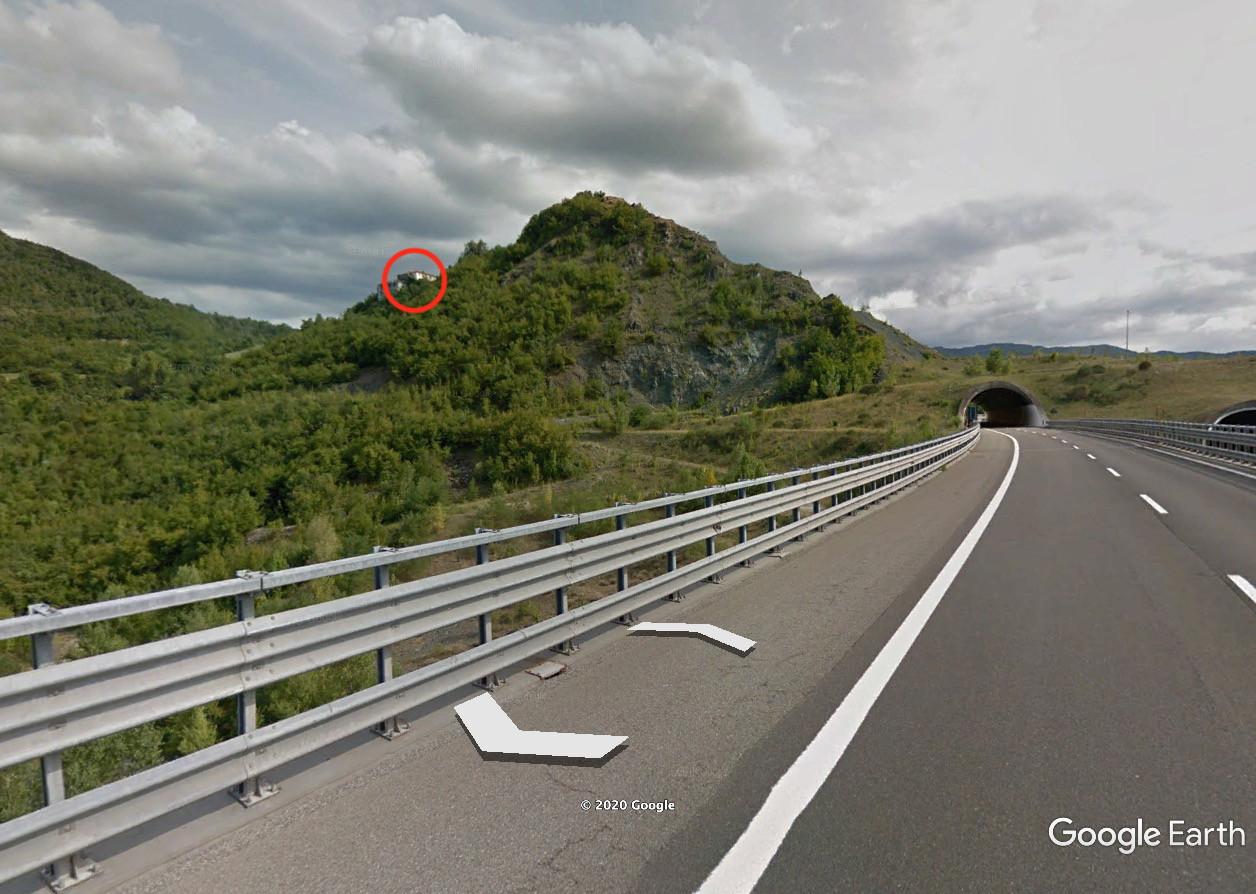 This is the A15 near Rocca Prebalza on Google Earth today. I was able to match the hill and house on it to my picture.

I had tried something similar a few years ago when I drove the entire length of I-75, but I only captured bits and pieces of the drive on video, like the 7 Mile Bridge in Key West1I-75 stops in Miami. The 7 Mile Bridge is actually on US 1.. I posted this video first on YouTube until it was taken down for copyright violations, and then on Vimeo until it was taken down there, too. I’m assuming it was because I had EMIN∃M’s song “Lose Yourself” on the video. Eminem has a history of aggressive copyright protection of his music, suing even Apple during its iPod glory days2a fad that lasted only a few years until Apple became doomed when iPod sales eventually tanked.

The moment, you own it, you better never let it go
You only get one shot, do not miss your chance to blow
This opportunity comes once in a lifetime, yo

The song “Lose Yourself” is from Eminem’s movie 8 Mile back in 2002, a pseudo-biopic (much like Purple Rain was for Prince). 8 Mile refers to the road that makes up Detroit’s northern border. Because of the movie, some of my German colleagues back then would ask me about what to visit on 8 Mile when they were over here for a business trip. I never knew how to answer them.

It was a few years after 8 Mile came out that a friend told me Eminem went to our high school. Eminem used to tag his initials “M&M” all over my friend’s neighborhood.

I asked my younger brother about Eminem, since they were born the same year. He said Eminem was actually a couple of grades behind him. He remembers Eminem at one of our high school talent contests, coming in second behind a choir that sang Madonna’s “Like a Prayer.”

Our school and our house was just north of 8 Mile Road. My family seemed to take 8 Mile Road whenever we went somewhere. We took it to work, to church, to school. We would shop there at Eastland Center and even go to the Michigan State Fair at the fair grounds.

I remember being dropped off on Saturdays at the Warren Cinema Theaters on 8 Mile to watch matinees for $1.25. There was also the Bel-Air drive-in theater on the Detroit side where my parents would take all five of us kids plus our neighborhood friends in our full size van for a double feature.

My first two accidents were on 8 Mile, including a very serious one into a truck underride, only saved from major injury because of my seatbelt. This was in 1985, a year after my family decided that wearing our seatbelts would be a good thing.

A year before that, in my first week of driving a manual transmission car, I nearly caused a terrible accident on the way to work. Even at 5:30 am, all of the lanes can be packed with cars. I remember switching lanes one morning and then seeing a commotion in my rear view mirror. A car was sideways in its lane behind me. That’s very odd, I thought to myself. It was only later I realized that I probably switched lanes into him without fully checking my blindspot, and he had to swerve drastically to avoid me. And I was oblivious to the whole thing. Thankfully no one got hurt. The luck (and stupidity) of youth.3Boy, I hope I’m finally a better driver now that I finally have blind spot detection and automatic emergency braking on my car.

My mom worked as a nurse at a hospital in Detroit for over 30 years. It was just a few blocks south of 8 Mile. We only had one car for a long time so my dad would often pick her up in the afternoon or at night after her shift. Sometimes she would work an extra shift at another hospital across town. My dad would get her from work at the first hospital, drive down 8 Mile to the other hospital, and then pick her up again when that shift was done—a 16-hour day.

There was a special reason why my dad liked taking 8 Mile Road—the lights were timed. If you drive between 40-45 mph, you can catch most of the traffic lights green for a long way. There’s always one or two lights out of sync that would mess traffic up, but in general traffic ambled along like a giant herd of cars. The traffic lights tended to cull the slower ones at the back of the herd, so you had to keep up.

My first traffic ticket was on 8 Mile in Ferndale while trying to “jump” to the pack of cars ahead of me (by going very, very fast).

The Detroit Police cars I would see late at night didn’t take advantage of this phenomenon. They would just approach a traffic light, slow to check cross traffic, and go right through the red light. Once in a while I would see one turn on its police lights before it ran the light.

8 Mile Road is the border between Detroit to the south and the suburbs to the north. It highlighted the racial tension in the area for years. 8 Mile Road is called Baseline Road in many places, but it could have easily been called The Dividing Line because of the disparity between Detroit and the northern suburbs.

I know I’m biased, but I believe 8 Mile is as much an icon of the Detroit area as Woodward Avenue4Woodward (M1) was too far west and too upscale for us east siders. We cruised Gratiot (M3). is, if in a different context. So I decided to memorialize it for myself with a video of its entire length like the autostrada videos. Fortunately 8 Mile Road isn’t that long. I did the morning drive early on a Sunday and got back home by breakfast.

East to West – The Video

Starting in Grosse Pointe Woods, 8 Mile is actually a residential street, broken up by Mack Avenue. It becomes a divided eight-lane road when it joins up with Vernier Road (M102) in Harper Woods. It stays this way until it meets up with Grand River (M5), where the M102 designation ends as well.

It becomes a typical four-lane surface road through Farmington Hills and Northville. From Northville it turns into a two-lane road. West of Beck Road, it loses its speed limit and stays a two-lane road until just past South Lyon. 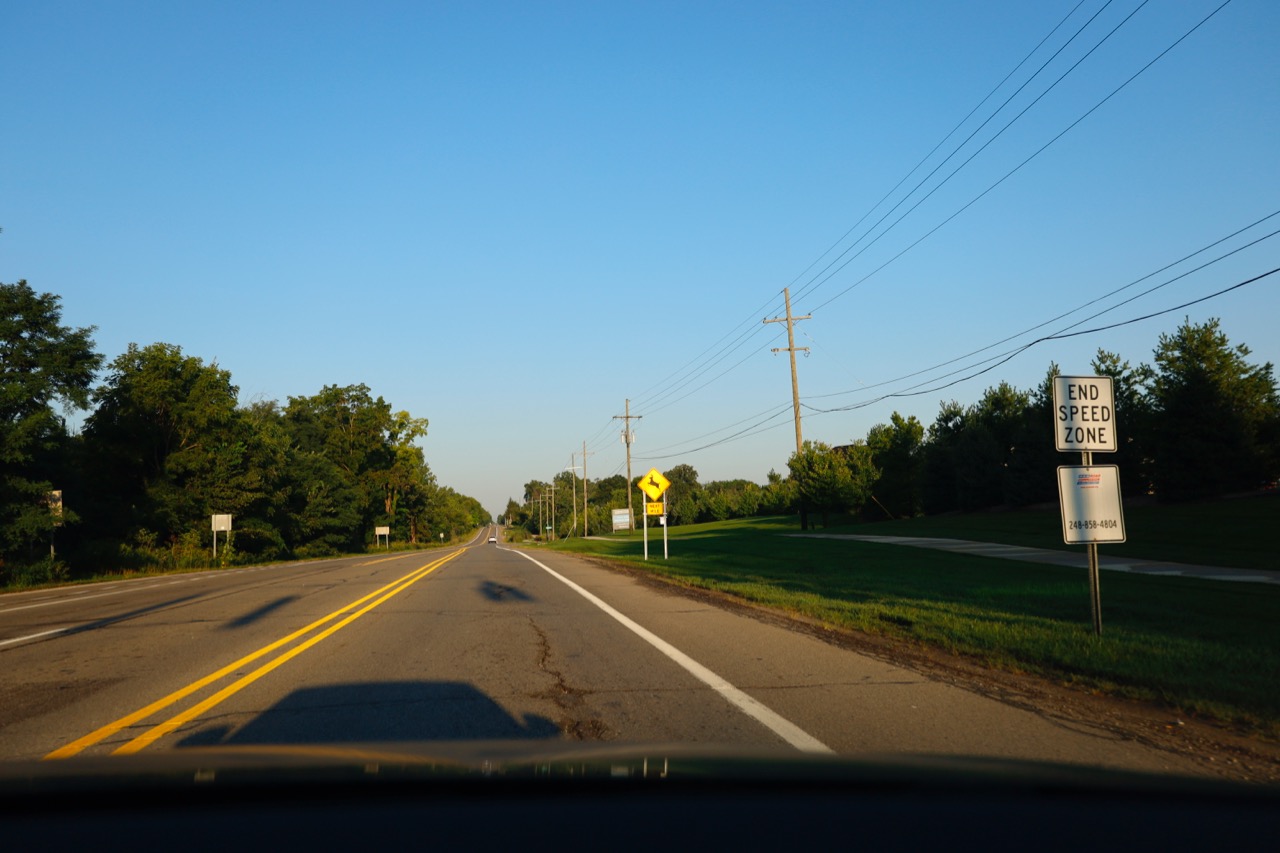 About a mile past South Lyon it becomes a dirt road. This section of dirt road was the only part of 8 Mile I had not driven on until I put this video together, and I only live a few miles away from there.

It stops for a while to get around Whitmore Lake and starts up again at US 23. It only goes a couple more miles from there, eventually disappearing all together shortly before Hamburg.


Probably unknown terms back in the 1980s: 4k, dash cam, GPS
(YouTube was called America’s Funniest Home Videos back then.)

Not surprisingly, the Bel-Air drive-in is gone, long since converted to a shopping center. I’m surprised, however, at what is still there that I recognize from 30-40 years ago. There’s the Bali Motel in Highland Park that still exists, for example. It always looked like a location for a crime or horror movie to me, even in broad daylight. 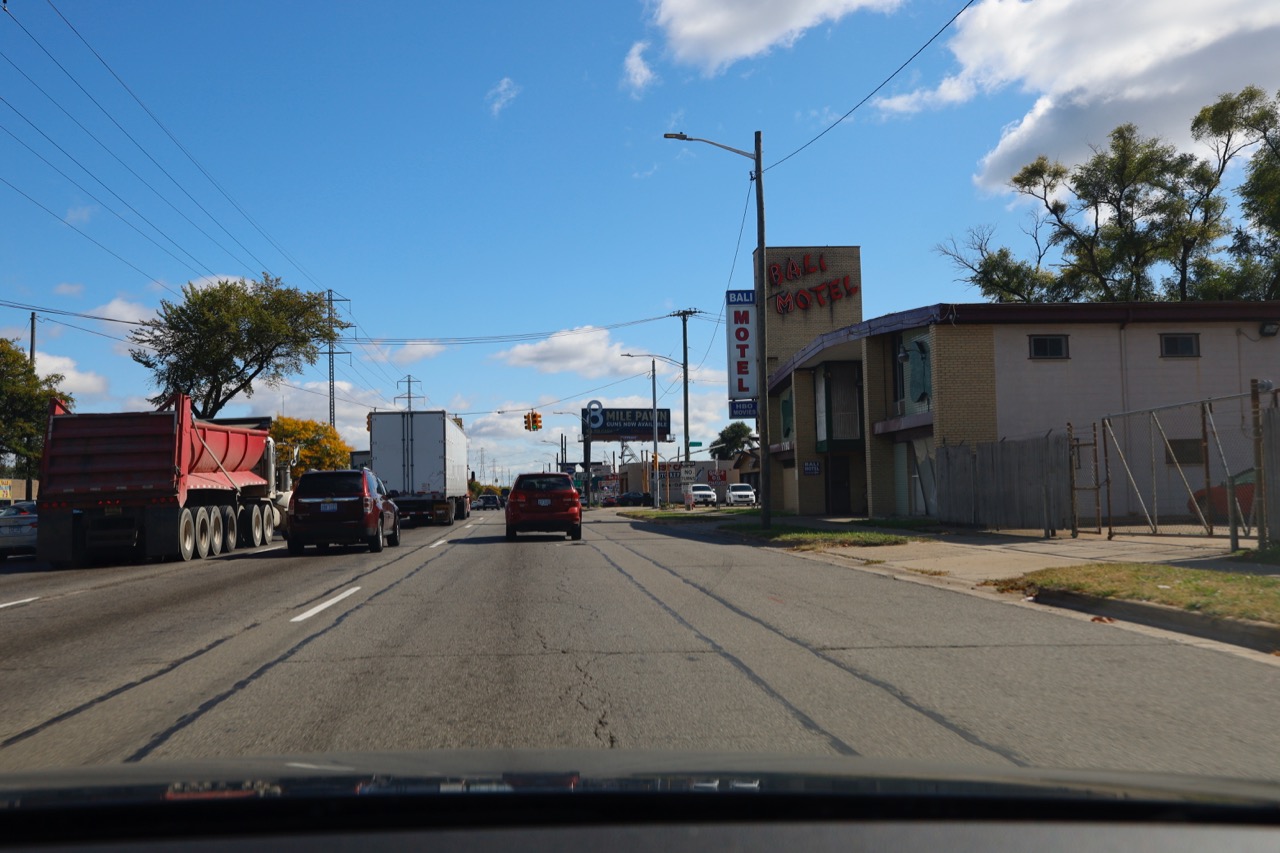 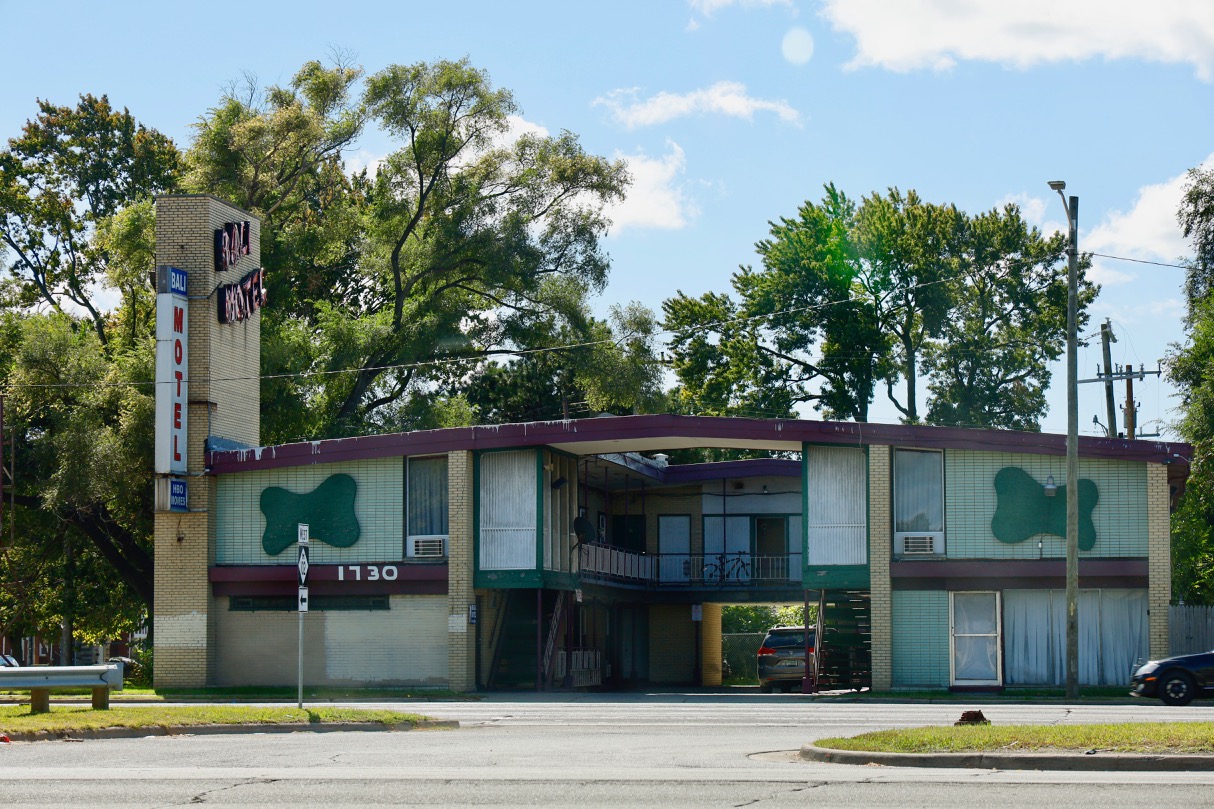 The Bali Motel. To be honest, I have not checked its Yelp ratings.

In my mind’s eye I can still see the sign for the old Federal Department store west of Dequindre Road. Its sign was on the building for years after it closed down. It was one of my location markers as a kid whenever we took 8 Mile Road to I-75.

Other buildings are still there, some with the old signage, some with new ones as the businesses had changed. Many more have long been closed and boarded up on both sides of the road. Some areas have been razed with new buildings put up. These new businesses stand in stark contrast to its surroundings. It’s a mix of old and new.

One new thing I noticed were the green flashing lights at night on many buildings, usually gas stations. I was told these lights are from Project Green Light Detroit, an initiative that started back in 2016. Places with these green lights have real time cameras connected to police stations to improve safety.

If you see garish lights, however, those are probably the gentlemen clubs that still proliferate the south side of 8 Mile. I didn’t notice these in the daytime, but they stood out at night. There’s probably as many as I remember from the past, although they’re in different places today.

My memory is sometimes an unreliable narrator so it’s hard for me to say how much has changed. But I’m sure it’s a lot. They say the only constant in life is change. Italian bridges disappear. Drive-ins become shopping centers. State fairs move after 104 years and eventually become virtual. But scary motels from your childhood, those stay forever.

If in the first act you have hung a pistol on the wall, then in the following one it should be fired. Otherwise don’t put it there.
—Anton Chekhov 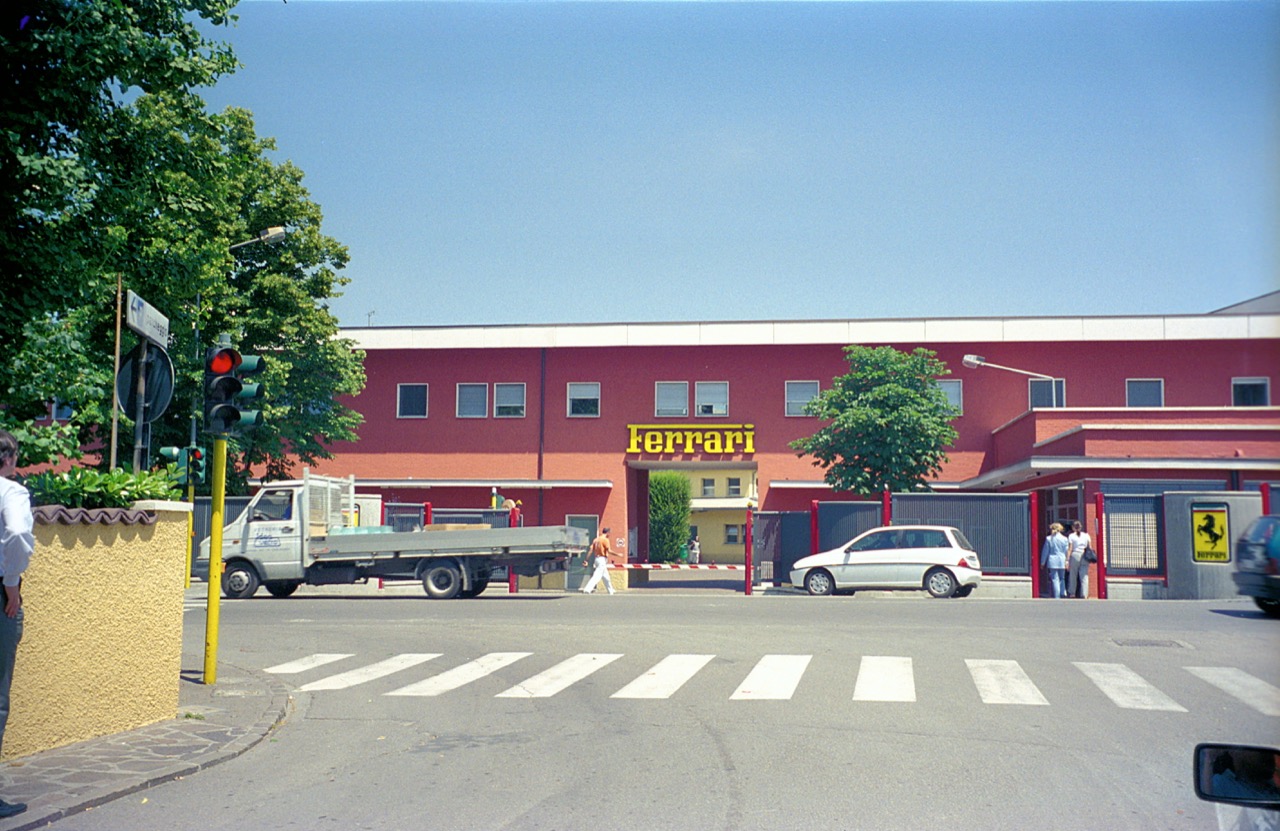