I’ve already mentioned how much I like rubber. This tire fetish of mine is seasonal—I get afflicted whenever I switch the tires on my cars. This November was no different. Over the Thanksgiving break, I changed the tires in two of my cars, switching to winter tires in preparation for that dreaded white stuff, snow.

So I would like to spout off a bit regarding winter tires. Am I professionally qualified to do this? Of course not. But I do write random things on the interwebs, and I work for a company that makes tires, although I have nothing to do with tires. Some of my cars have my company’s tires, and some don’t. My basis for the following is simply from buying a lot of tires, light-hearted discussions with friends on the topic, the internet, and common sense.[1]

[1] I apologize for putting “internet” and “common sense” in the same sentence.

It’s possible that over the years I’ve picked up some superstitions about winter tires that I’ve included here. Please feel free to tell me about them in the comment section. Also, I have zero experience with studs or chains, so I won’t comment on them here (although tempted to).

Should I really buy winter tires?

Unless, of course, you live in places that don’t get snow in winter. In that case, I hate you and will laugh when light frost shuts down your entire city. But if you live in state like Michigan, which has an eight-month winter (and sometimes nine), then it’s a Very Good Idea. (Or if you live in these godforsaken places with extreme snowfall. By the way, have I mentioned that I hate snow?)

I realize there are a lot of reason for not buying snow tires. Some people have all-season tires, some people can’t afford it, and so on. Those can be valid reasons. In life, we pick our compromises. I choose to spend a few hundred dollars every few years in exchange for minimizing risks to my family and cars in the winter.

It’s not a law here in America like it is in Germany or Quebec, but it is a Pretty Good Idea.

But I have all-season tires. Do I really need winter tires[2]?

Like I said, that’s a compromise. An all-season tire doesn’t have the grip and handling of a summer tire, and doesn’t have the grip on ice of a winter tire. I’m generally risk-averse, so I change tires. In my wife’s all-wheel drive Subaru, I can easily turn donuts in a snowy parking lot with all-season tires, but have a really, really hard time doing the same in winter tires (um… this was for engineering analysis, of course, so don’t mention it to her).

One thing to consider is how old or how many miles your tires have. Over time tires wear out their treads and harden, reducing grip on snow and ice. Those all-seasons that were okay in the snow two years ago may not do as well this winter. It’s your choice, but I would still recommend buying winter tires.

[2] Tire manufacturers don’t call them “snow” tires any more, as they have to perform in snow, ice, wet and dry conditions. To-ma-to, red-hot-chili-peppers.

“Compromise: An agreement between two men to do what both agree is wrong.”
—Lord Edward Cecil

Which winter tire should I buy?

I don’t know. I’ll tell you that I have Blizzak WS70s on my Subaru, and Continental ExtremeWinterContact on my wife’s Subaru, and General Altimax Arctic on my Honda. I’ve also used Pirellis, Dunlops, Yokohamas, and Michelins in the past. I’ve been pretty happy with all of these.

In general, any winter tire will have better performance in snow and ice over any summer tire.

You could of course read the reviews online and get confused and frustrated. One of the issues with reviews is that you don’t always know the reviewer’s expectations, so you don’t know if the product was bad, or just didn’t meet the his/her expectations. Still, if a large number of people rate a tire well, that’s probably a good indicator that it’s a good tire (or a manufacturer was stuffing the ballot).

There’s a category of winter tires for sporty vehicles called performance winter tires. It’s normally associated with good handling, but I think these tires were designed for the high speeds (and associated heat) of the autobahn. When I bought a set of these in Germany, the tire store put a sticker on my dash reminding me not to exceed 210 km/h (130 mph), as indicated by the tire’s speed rating.

I’ve also owned Z-rated (240+ km/h, 149+ mph) performance winter tires, although I forget now what the service description was (which indicates actual top speed). Those were good from 2 inches of snow to 160 mph, although not at the same time.

The difference between these tires is how they compromise between snow/ice grip versus handling performance. Most people (not Todd) should get the “real” winter tires since they shouldn’t be approaching 99 mph (not Todd) in winter. For people with high performance cars (Todd) that like to drive fast (Todd) year round (Todd), and may approach (Todd) or exceed (Todd) autobahn speeds, go with the performance winter tires.

“A compromise is the art of dividing a cake in such a way that everyone believes he has the biggest piece.”
—Ludwig Erhard

I’ve been using the same set of snow tires for four winters. They should be good for another, right?

Probably not. It depends on the brand and driving conditions, but you can’t drive indefinitely on these tires. I get about three winters on my snow tires, driving 10,000-12,000 miles per winter.

Try and see if they’re still okay. If it seems fine, go for it. I’m penny wise, pound foolish, so I keep trying to get another winter out of my tires when I probably shouldn’t. But don’t do as I do, do as I say.

Can I mix and match my tires?

I wouldn’t recommend it, even with normal tires. If you have different brands or different types of tires on your car, it will have uncertain handling characteristics. In other words, who knows how it will handle as the conditions vary. Depending on where you install your tires on your car, it may understeer more (tendency to go straight in a turn) or oversteer more (tendency to turn sharper than desired in a turn) than it would normally.

I have an all-wheel drive (AWD) car. Do I need winter tires?

Only if you need to stop. The advantage of all-wheel drive is to make it easier for the car to go in snow or ice. When it comes to stopping (or turning), all-wheel drive has no distinct advantage over front or rear-wheel drive vehicles. It all comes down to the grip of your tires.

Consider this data from the following boondoggle with guys screwing around in the snow pretending to do a serious magazine article test regarding the all-wheel drive Subaru WRX STI.

That’s 117 feet longer to stop on ice when using summer tires instead of winter tires.

When is the best time to change tires?

In Germany, the rule of thumb is “von O bis O,” or von Oktober bis Ostern (from October to Easter). I change mine on Thanksgiving (November in the U.S.) and Easter (first Sunday following the first ecclesiastical full moon that occurs on or after the day of the vernal equinox), only because I have the extra time to do it.

Continental Tires recommends using winter tires when the temperature drops below 45°F (7°C). This seems to be the temperature where rubber molecules start to harden and freeze. That last one is hard for me to go by, as temperatures can be in the 30°s in the morning and the 50°s by afternoon in autumn in Michigan.

Maybe the best way to say it is, change to winter tires if you think you’ll get snow or ice in your region. This can be filed under “common sense.” 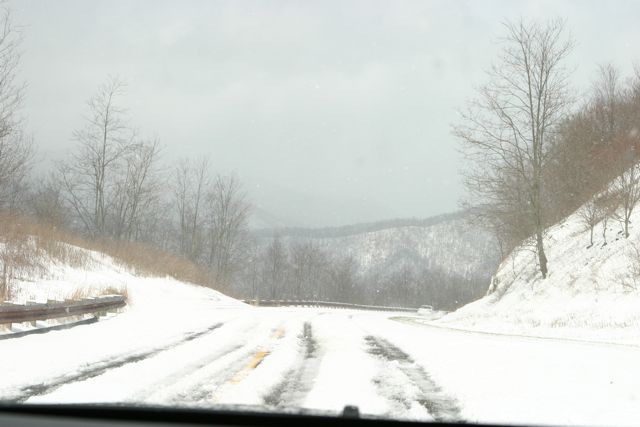 April is not a good time to change to summer tires in the Appalachians, apparently. D’oh!

If winter tires are so great, can I drive with them year round?

Technically yes, but I wouldn’t recommend it. Heat is the big enemy of tires. Since winter tires are optimized for lower temperatures, they don’t do as well as the temperature rises. This will lead to faster wear. By the time winter comes around again, the tires will have degraded performance.

Winter tires generally have poor handling characteristics, and are not typically designed to prevent hydroplaning. If you’re switching tires anyway, go ahead and get a good set of summer tires for your car.

Only if you live in an alternate universe where the laws of Newtonian physics don’t apply.

The purpose of all those systems in your car is to allow the car to get as close to ideal performance as possible with nut jobs like us behind the wheel. For example, ABS (anti-lock brakes) typically works by letting the tires lock momentarily, releasing them, and then locking them again. This happens over and over, but very quickly. I’m simplifying here, but that’s the gist of what happens. In contrast, an experienced driver, like a race car driver, can brake at the threshold of tires limits without locking the tires. In dry pavement, this would result in better braking than with ABS.

Traction control is another example. Traction control tries to prevent a car from spinning its tires. It’s trying to maximize available grip. It can’t increase the traction of summer tires on ice, it can only use whatever grip is available. It’s the same concept with ESC (electronic stability control).

The point is here is that these systems won’t make driving foolproof, but they are a big help to most drivers.

If you have all these systems in your car, and drive like a mad man in snowy or icy conditions, chances are you will lose grip, which leads to Very Bad Things. We engineers have not perfected the SDW (stupid driver at wheel) module yet, so don’t do that.

Use common sense. I know that’s asking for a lot in today’s day and age. Even if you have all these safety features while driving in wintery conditions, slow down and give yourself more distance for stopping and turning. And in case I lapse into a Walter Mitty/Sebastian Loeb impression because I forgot my meds again, just stay the hell off the roads when conditions are bad.

All right, fine, I’ll get winter tires. One last question—where do I store my tires when I’m not using them?

Tires should be stored in a cool, dry, dark place that’s well ventilated. The tires should be clean. Wrap and seal each tire in an opaque plastic bag.

Although it’s a big pain, I store my tires in the basement where the temperatures are cool and consistent. The temperature in a garage can be extreme, unless it’s regulated. If you have a climate-controlled garage, then give me a call. I have some tires I’d like to store there.

The links here and here have more information on storing tires.

Here are some additional links about winter tires. Maybe if you read this often enough on the interwebs, you’ll think it’s true.

And one last thing… gas mileage. This won’t apply to everyone, but it certainly applied to me. My summer tires have a high rolling resistance and reduce my gas mileage. When I switch to my winter tires, I improve my gas mileage 1-2 mpg. This is hard to accurately quantify, as there are many variables (temperature, gas formulation, driving conditions) to consider when comparing winter driving with summer driving. In my wife’s car, I see no measurable difference. Take it for what it’s worth.