“Every curve is exciting, if you go fast enough.”
–EMan’s sister

There’s a Simpsons episode (season 16, episode 13, “Mobile Homer,” for those that care) where Homer and Marge are on the freeway chasing Bart and Lisa, who are in a recreational vehicle. Marge is looking ahead and says, “I can’t see past all the SUVs.”

Homer replies, “Don’t worry about the SUVs. There’s a gentle curve up ahead.” As the SUVs reach the curve, they all fall off the road into a burning mass of mangled, molten metal, presumably because the tv writers hate SUVs but like alliteration. 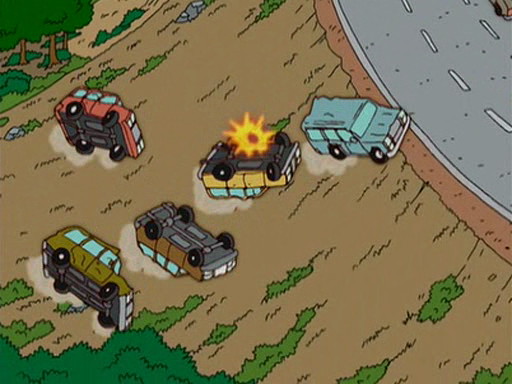 I wish SUVs would crash in curves more often. That would at least give a real reason why people drive slowly through curves. You know what I’m talking about. You’re following a car as in enters a bend in the road and its driver invariably steps on the brakes. Is it because of a disabled vehicle at the side of the road? An accident perhaps? Pre-trail braking? Bambi’s dad running across the road pushing a stroller filled with nuns holding internet kittens? Nope. It’s The Gentle Curve of Death.

A significant portion of the driving population fear this Gentle Curve of Death. At least, that’s what I believe since I see so many people tapping their brakes for one. My guess is that these drivers think that by slowing down 1 mph before the curve, they will avoid the fiery death and destruction that awaits other vehicles traveling 1 mph faster.

Meanwhile, their Gentle Tap propagates backwards into the Traffic Caterpillar of Death. That’s where each preceding car has to brake harder than the car in front it of, progressively getting slower until cars further than half a mile back of the Gentle Curve of Death are actually driving backwards.

Why? Why do people drive this way? I often ponder this deep in the night as I try to blunt my cranky rage by watching videos of Ken Block doing donuts* on the intertubes. Is it from all of those 1960s driver ed films of people flying through glass windshields of cars? Are these drivers on their phones and don’t know realize until too late that the road is changing direction? Or is breathing through their mouths and driving just too much load on their cerebral cortex?

(*There are two types of Ken Block videos on the intertubes: Ken Block doing donuts, or Ken Block crashing a rally car. Both are hypnotic.)

A local road course in the Detroit area, Waterford Hills, is a small 1.42 mile, 13-turn track, which local car club regions regularly rent for “driving schools.” Its back straight isn’t that long, so ultimate speed isn’t the main thrill on this track. It’s all about the turns. It’s staying out of the gravel in Turn 1, holding your line on Hilltop, not splashing into the swamp in Swamp, and so on. The turn’s the thing. Years of driving here has created a different problem for me on public roads—I tend to speed through corners.

This leads to sometimes having a higher speed on an entrance/exit ramp than the freeway itself. Or forgetting to exit the plentiful Oakland county roundabouts (yelling, “yee haa!” optional). Or subconsciously following a Mustang that just zoomed by me through the curvy parts of I-696 in my wife’s Subaru station wagon at 135 mph. Um… all hypothetically speaking, of course. 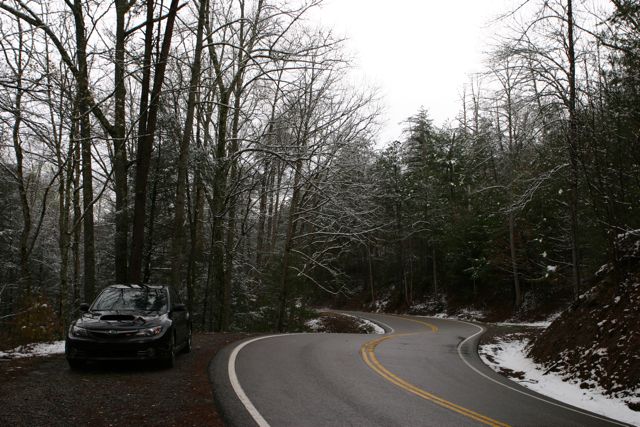 So what’s the difference? Is it simply driver skill? Does taking driver education classes from sports car clubs on a race track safely provide the instruction, experience, and confidence one needs to control their vehicle through the Gentle Curve of Death over traditional, brain-dead driver education courses designed for 16-year-old students with ADHD? We may never know.

There is a simple solution to this problem. If you fear the Gentle Curve of Death, get off the road. Don’t drive. Stay home. Or hitchhike on lonely highways in the desert. At night. In the rain. Do anything but get behind the wheel. I already have to deal with the Curse of the Freeway Merge. Please, just let me drive through Gentle Curve of Death in peace. A typical desert hitchhiker
bad drivingTail of the Dragon