I took a recent road trip for work to our proving grounds in Michigan’s upper peninsula, the UP. Although I’ve lived in Michigan for most of my life, this is only the second time I’ve been to the UP. The other time was to take my wife to Mackinac Island, which to many people around here doesn’t really count as going to the UP.

I hated the car I was driving. It is one of our test cars, a big, rear-wheel drive car. It’s too big for me. Although it has winter tires, they are old winter tires (and a brand from my company) and really need to be replaced. This certainly had the potential for disaster, since this trip was in March.

My first clue that this could be bad was while trying to change lane in slushy snow a couple hours north of Detroit. The car’s stability control kept me guessing if and when the car would actually move over. And it would get worse.

“Don’t knock the weather; nine-tenths of the people couldn’t start a conversation if it didn’t change once in a while.”
—Kin Hubbard

When I crossed the Mackinac Bridge into the upper peninsula, it didn’t take long before vowing never, ever to come here ever again. Ever. If not longer. I drove in slippery, whiteout conditions the entire time in the upper peninsula until I arrived at my hotel.

The snow had started coming down as I approached the bridge. By the time I crossed it, there was significant accumulation on the roads. I then made the mistake of passing the cars ahead of me. As I drove past them into the whiteout, it occurred to me that I no longer had any reference points ahead of me, like knowing where the road was. D’oh! For some reason, at 10 pm on a Sunday night in a snow storm in the UP, there didn’t seem to be much traffic around. Just lots of trees.

So I just drifted back and forth between the left and right rumble strips, hoping they would be there as well on bridges.

If you’ve never driven in a whiteout, I can try and re-create it for you.

This is the part I don’t fully understand. Although the conditions were abysmal, I never stopped. Neither did the handful of people behind me. No one thought about pulling over for a little while and waiting until conditions improved. Or at least until a snow plow came by. Instead, we all decided to take the chance of removing ourselves from the gene pool. I’m guessing it’s probably a guy thing.

I was pretty cranky by the time I pulled into Sault Ste. Marie about an hour and a half later. It stopped snowing right when I took my exit, the last one before driving into Canada.

Luckily for the drive home, I was asked to drive a mid-size, front-drive test car back. I say lucky because it’s more my size, and it drove like a rental car to me, which I like for some reason. This time I drove with my colleagues in a mini convoy. As we got “down state” (a new term for me for the lower peninsula), we hit more snow. It wasn’t whiteout conditions, but it was annoying none the less.

My supervisor drove the car I had driven earlier, and he seemed to have no issues with it. At some point we got separated, and it took me over 20 minutes just to catch him and another colleague who was in a brand new, all-wheel drive BMW 535i. My supervisor was leading the way, driving 70-75 mph in the heavy, freezing snow. I considered it impressive driving on his part. If I was driving that car, I’d still be up there, lodged between two trees deep in the northern Michigan forest, waiting for the spring thaw.

Strangely, when the roads cleared up around Saginaw, he slowed down. It was probably too boring for him. 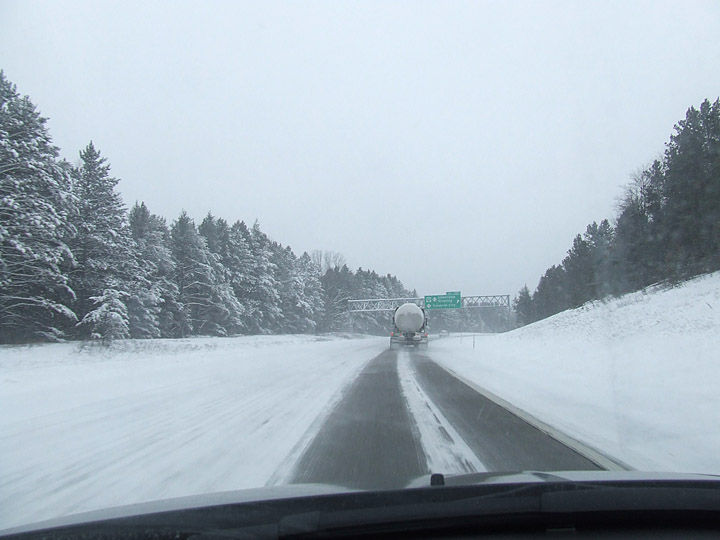 At least I didn’t have the sun in my eyes

I made it back home, but not without incident. I got stuck once in the snow—in the ever treacherous Subway parking lot when we stopped for dinner. Don’t ask. I’m still paying blackmail tribute for this incident.

What did this little adventure tell me? Well, it snows a lot in Michigan, especially up north. I don’t like snow. I may even hate snow. I definitely hate driving in snow, especially without my Subaru. That just makes me extra cranky. Michi-people drive either really, really fast in snow, or really, really slow. There’s nothing in the upper peninsula except road kill and snow. And I’m an idiot.

So basically, I didn’t learn anything new.

“A lot of people like snow. I find it to be an unnecessary freezing of water.”
—Carl Reiner