Some German wise guy once said something about time being relative. One German example I have of relative time is my first apartment in Germany. My neighbors in the building kept referring to my apartment as one of the “new” ones. Later I found out it’s because my part of the building, which was actually once the outer wall of the city, was built in the 1700s, a couple hundred years later than the rest of the building. The old stone bridge across from my apartment was completed around 1146AD, and carries traffic daily over the Danube river. The Germans know old.

We don’t have this same sense of time in America. When was the last time you saw a 500-year-old building in America? We’re more of a disposable society. We package our fast foods in paper and plastic; we lease a new car every two years; we change houses every few years. Some houses are disposable, too (see: Mobile Home vs. the Tornado).

Meanwhile Germans build Porsche 944s with 14-gauge wire going to the tweeter speakers. That’s one less wire I have to worry about.

My latest example of German over-engineering is the car child seat. We borrowed this from friends in Germany. It weighs about as much as a Smart car (and is only slightly smaller). Those two menacing steel prongs are for the ISOFIX latches in the seat. The ISOFIX is similar to the LATCH system American cars have, but is, you know, more European. The other appendage up front goes to the floor of the car, substituting for the rear anchor attachment in our U.S. car seats. 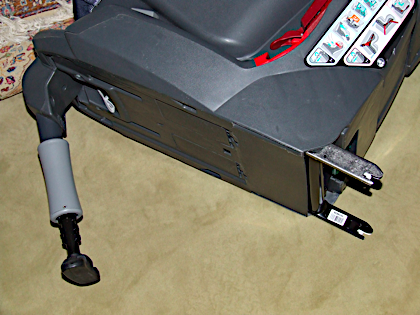 This is actually a good engineering solution. If you can carry this to your car, it attaches relatively quickly to an ISOFIX seat, and is pretty stable with that plastic and metal stake up front.

“A suburban mother’s role is to deliver children obstetrically once, and by car forever after.”
–Peter De Vries