I drive faster than I should. While this is an affliction that affects many driving enthusiasts, I’m still able to lead a generally normal life. I just have to remember to follow two simple rules: 1) don’t drive in wet weather like it’s dry, and 2) let the police car go faster.

So every winter when it snows, I slow down. I like snow, as long as I don’t have to shovel it, plow it, walk through it, or see it. Driving in it is also not so high on my list. But as I live in Michigan, I’ve learned to deal with snow while driving.

“The one thing that unites all human beings, regardless of age, gender, religion, economic status or ethnic background, is that, deep down inside, we ALL believe that we are above average drivers.”
–Dave Barry

There are a few things I tend to look for when it snows. One is the Panzer. This is the car completely covered in snow except for a slit on the windshield in front of the driver. Another is the Rally Driver. This is the person who blows by you in the left lane while you’re barely even able to stay in your own lane. This person is usually a good candidate for a game I simply call, Furthest from the Road.

I give creativity points in this game. Getting caught up an embankment in the trees with no visible entry or exit is pretty good. Bridging a ditch isn’t as easy as it sounds. Neither is straddling two guard rails. I just have to make sure I don’t play this game myself.

There was a turn around near my old apartment where I used to see tire tracks go up the curb and knock down a traffic sign whenever it would snow. I used to marvel at the idiots that kept knocking the sign down, and at the city that kept putting the sign back up. It goes without saying that one day, while rushing home for a date, I knocked that sign down, proving once again that I am an idiot (which makes me cranky).

As I see that more snow is forecasted for tomorrow’s morning commute, I have to remind myself of my first rule of life: avoid ending up in a YouTube video. 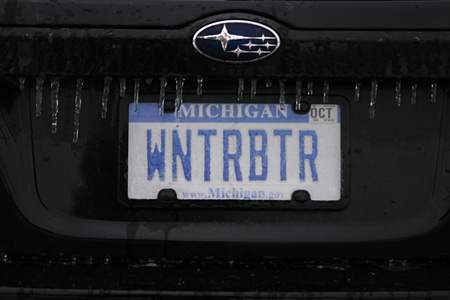