A few years ago I posted about three of my cars hitting 148,300 miles at about the same time, something which took 15.3 years of random planning. That led me to look at my driving mileage at different points of my life. I’m doing that again here, but this time looking at my annual mileage. That just makes it easier to see the difference between being single and being married.

Again, I’m the only one that cares about this, but it pleases me that my annual driving mileages are the tree rings of my life. My life has tended to revolve around cars and driving, and this is apparently my life’s testament.

So I broke out Excel again and plotted out how many miles I drove each year since about 1984. If I had multiple cars, I combined their mileages. The year on the x-axis represents the beginning of that year, which means it is the mileage from the previous year (i.e., the January 1985 point represents miles driven in 1984).

The five cars represented here are a 1984 Buick Skyhawk, 1990 Chevrolet Beretta GTZ, 1989 Porsche 944 Turbo, 2000 Honda Civic Si, 2008 Subaru WRX STI. The Skyhawk and Beretta have gone to the Great Junkyard in the Sky (that would be in Warren, MI). All were/are manual transmissions. 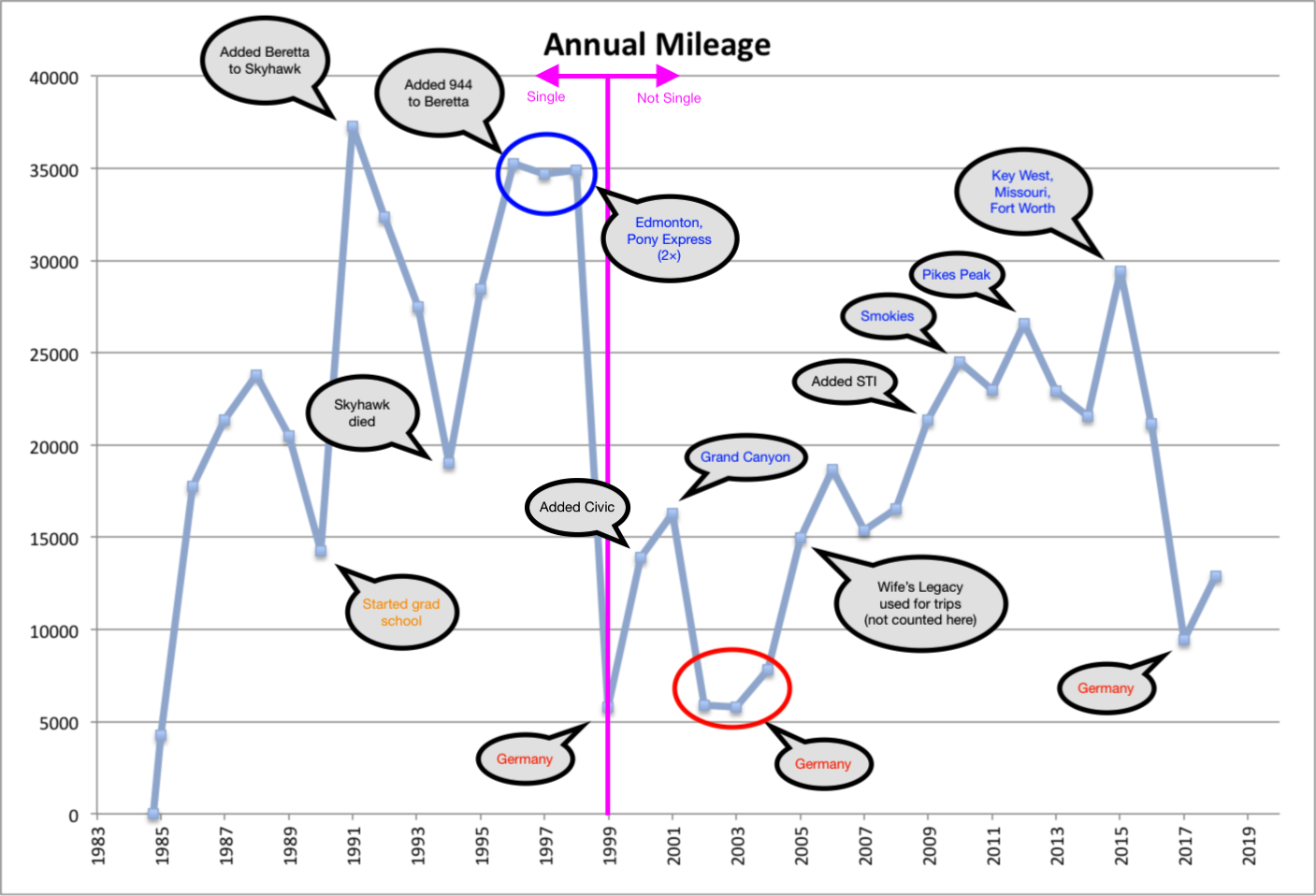 There are some pretty obvious trends here. For example, my German assignments in Regensburg and Lindau are low driving points. I couldn’t even hit 10,000 miles/year there. Being in the land of autobahns and the Nürburging, I hope this was a case of quality over quantity.

Or maybe because German cities are dense and have great public transportation. In Regensburg, I either rode my bike or took the bus to work. Most of the mileage on my car came from vacations to France and Italy. Driving to Italy is just like driving to Kentucky 1When they find my body, at least the police will know that the Italians were to blame. Or the Kentuckians. from Michigan. I averaged just over 5,000 miles/year in Regensburg. 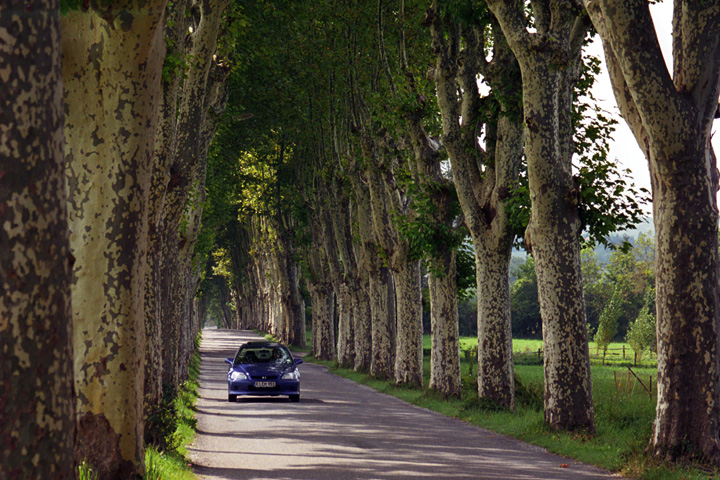 If this Provençal road were in America, there would be an ambulance chaser hiding behind every tree.

In my last German assignment in Lindau, work was only 13 miles away. We also drove regularly to my in-laws, which was the equivalent of driving from Detroit to Chicago (only much, much faster). I took the car to Italy, France, and Switzerland for vacation, and all I could muster was 9,459 miles/year.

The logical conclusion here is that the gravity is Germany is stronger, bringing the points on the map closer together. Science.

The journey of a thousand miles begins with putting a really good playlist together, or downloading Spotify.
—Not Lao Tzu

Prior to meeting my wife, apparently all I did was drive. I drove around 35,000 miles/year four times, and once over 30,000 miles. I only lived around 5-7 miles from work during this period. I was going to say that this was before I was on the internet, but back then, the internet was called America On Line.

My only explanation was that I was awake and in my car all the time due to my minimum two Mountain Dew-a-day habit. And long road trips fueled by said drink.

Up to now, I have not been able to suss out any driving variation due to the birth of my kids. I’m not sure what that says about me yet.

(Update 2018-03-03: A friend just pointed out to me that my mileage has steadily climbed since the birth of my kids. School, play dates, and soccer practices will do that to you. So a big, “duh!” to me. Thanks, Stewart! So here’s a little ditty from Graham Nash to commemorate my duh!-ness.)

The reason for the uptick in mileage starting in 2005 is my one-hour commute to work in the Detroit area.

The upshot of all this is that I’ve been averaging 20,202 miles/year since 1984. The average American male (35-54 years old) drives 18,858 miles per year, according to the Federal Highway Administration. That puts me just a tick over average, which is just where I like to be.

Starman, on the other hand, needs less than three hours in his Tesla roadster (at 7,451 miles/hour as of today) to drive as much as I do in a year. I’m only slightly jealous. 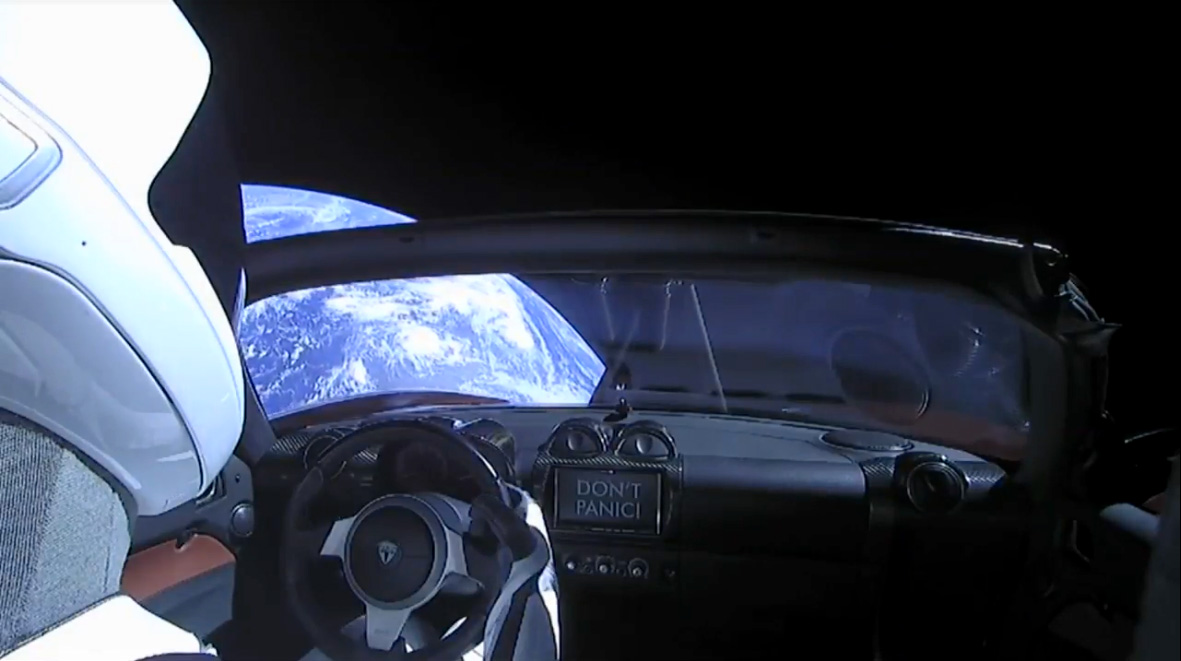 Photo courtesy of Space-X and the Internet

It’s the journey, not the destination.