I attended a two-day program of the 2020 Subaru Winter Experience and did unnatural, unspeakable things with cars. It was both a hoot and a holler.

Years ago I had read about the Porsche Camp4 winter driving school near Vail, Colorado where you stay at a 4-star resort. Since that was out of my budget, I forgot about it until I went to Sweden a couple of years ago. In the Arvidsjaur airport were signs for winter driving schools for Audi, Volkswagen, Jaguar, and even one for exotics. During that trip I started looking around for something similar in the States. The closest I found to my house was Mercedes’s school near Winnipeg.

But then after I got home I read an Autoweek article about the Subaru Winter Experience on Dollar Lake in Eagle River, Wisconsin. While both Winnipeg and Eagle River are in the middle of nowhere, at least Eagle River is closer to my house. And they drive in MPH as God intended.

Finding one just a few hours away was nice, and being a Subaru event (on a Subaru budget) was a bonus. I had hoped to drive my STI in 2019 to attend it, but work/life/Sweden demos always seems to win out. This year, however, our Sweden demo was significantly reduced in scope giving me time to attend, but driving there in my Golf R instead of the STI.

So on a Sunday in March I took the 9-hour drive around Chicago to Chanticleer Inn in Eagle River, WI. Subaru provides the new cars and hires FlatOut Sweden to organize the event. FlatOut Sweden is run by Patrik Sandell, a Subaru Motorsports factory driver. In turn, they use DirtFish rally school out of Washington state to provide the instructors and curriculum for the events.

There are one, two, and three day programs, both regular and advanced. They run everyday (including Sundays) for about 4 weeks from February through to March. That’s when the ice on the lake is best for these events. I had signed up for the regular two-day program.

Dollar Lake has limited access, with makes it semi-private enough to keep the snowmobilers away. What was important for me was the minimum of 20 inches of ice underneath the cars.

We started our first day on the ice with slaloms and ABS (anti-lock) braking to familiarize ourselves with the cars. From there it was driving on the different courses they had set up. There are no classrooms here, only maximum seat time.

I thought I was doing fine, but in hindsight, I totally didn’t get it. I was driving as if on a race track, but on ice. Occasionally I would get into a drift, and immediately screw it up. But it was still a fun first day.

We took our breaks at the fake igloo where it was cozy and filled with snacks. However, the warm weather from the previous days created slick ice all around it so walking there was the most dangerous thing we did over the two days. 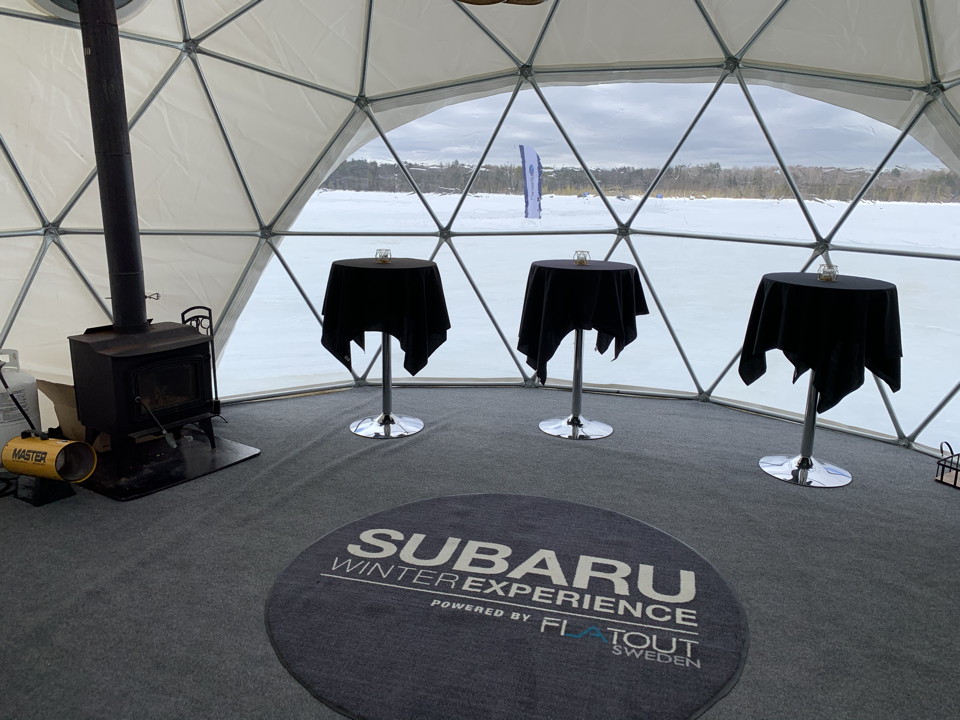 The warm weather also affected the courses. Ruts had formed where the ice melted, partially froze, and then driven over by us throughout the day. Rally drivers can handle these changing conditions, but not neophytes like myself.

So after our first day, Patrik and his team incredibly went out and spent hours creating new courses with fresh ice underneath. These new courses made for more consistent driving conditions.

We practiced hand brake turns and the Scandinavian flick on the second day among other things. I did these exercises, but I still didn’t get the physics of it all in my head.

That’s when one of the instructors jumped in the car and showed me how we were supposed to do it.1That’s also why you should buy your instructor a drink afterwards. So I finally got it, on the last session of the last day.

Years of trying not to spin on a race track kept me from being able to drift on the ice until it finally clicked. If we are the sum total of our driving experiences, then I’m a better driver for coming out here.

If in doubt, flat out.
—Colin McRae

I left early in the morning for my eight hour drive home through the Michigan upper peninsula. While driving on the dark, empty backroads, I have to admit that I wanted to pitch my little Golf sideways every time I saw a curve. I can’t wait for next year. 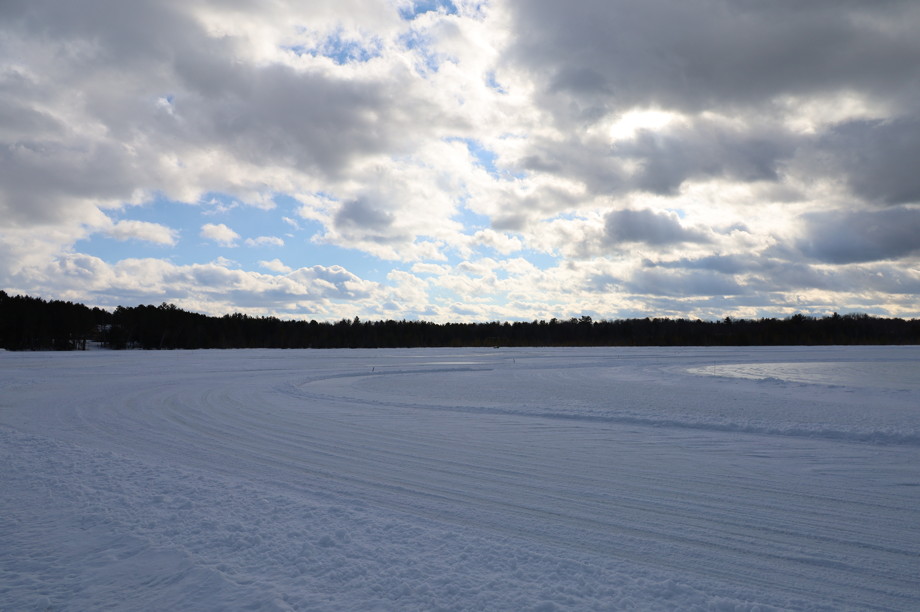 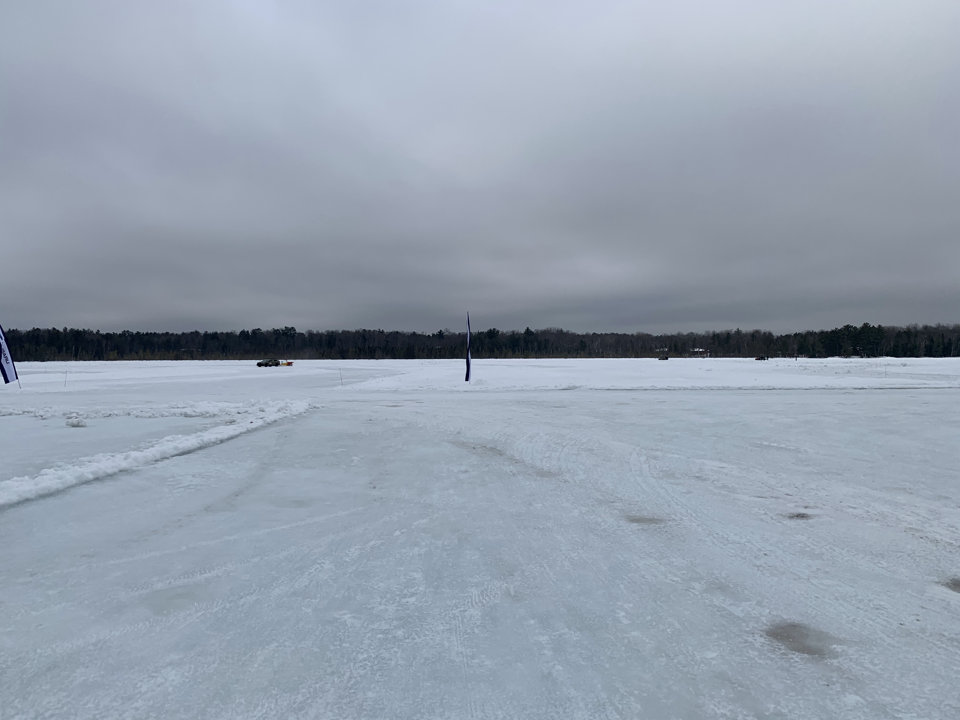 Unlike the Tardis, Dollar Lake is bigger on the outside.

There are plenty of GoPro videos of this event on YouTube, so here are my GPS logs.
Blue – Afternoon, first day
Red – All day, second day
The 2 red lines on the outside are the instructor hot laps

All of the cars were fitted with studded Swedish Lappi winter tires. According to an instructor, they’ve been using the same set of tires for three years now. 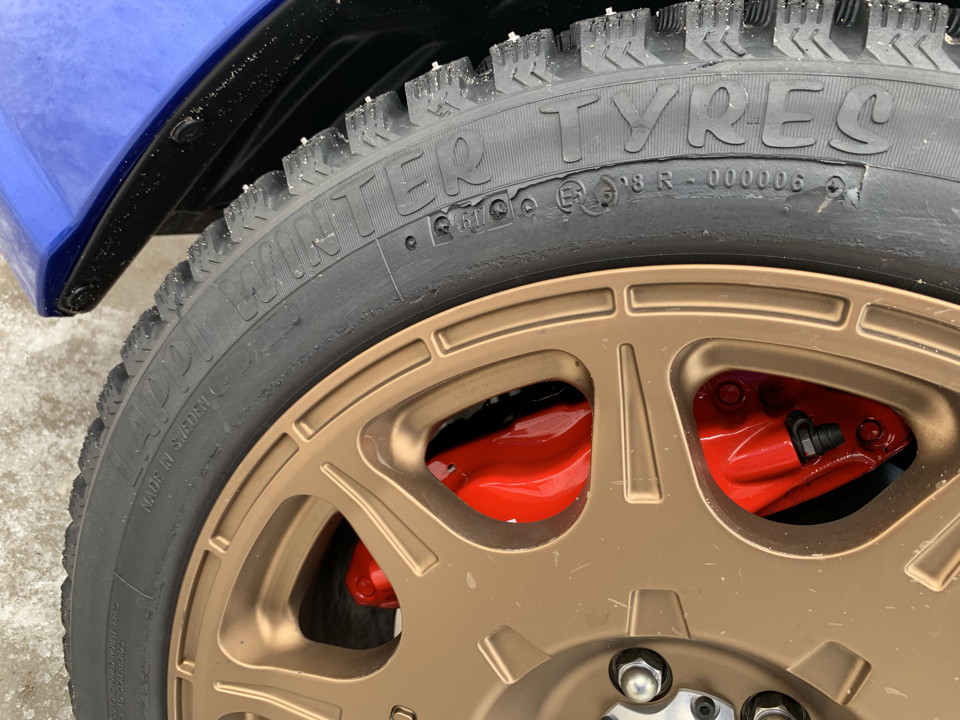 To be honest, I had never of Lappi before coming here.

It’s a cliché, but it’s also true that the STI is a hammer and the BRZ is a scalpel. It was easy to go stupid fast in the STI. Even in stock form it feels ready for rally stages. I drove the STI the way I had always wanted to when I owned one. It definitely made me miss that car.

And yet, it was the BRZ that made me smile the most. It was more satisfying to drift around a corner in the BRZ, even if I was slower. The BRZ is very communicative and also easy to throw into a slide. Every instructor smiled when they talked about the BRZ.

Traction control is the anti-fun mode. We tried all the settings, but even the “track” setting took away some of the fun. Luckily, you can completely disable it in all of the cars here. 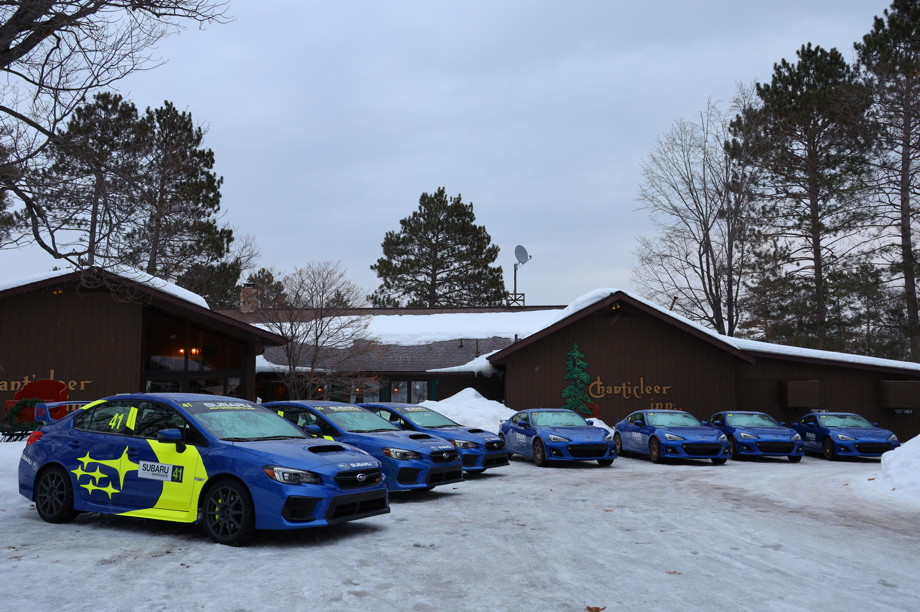 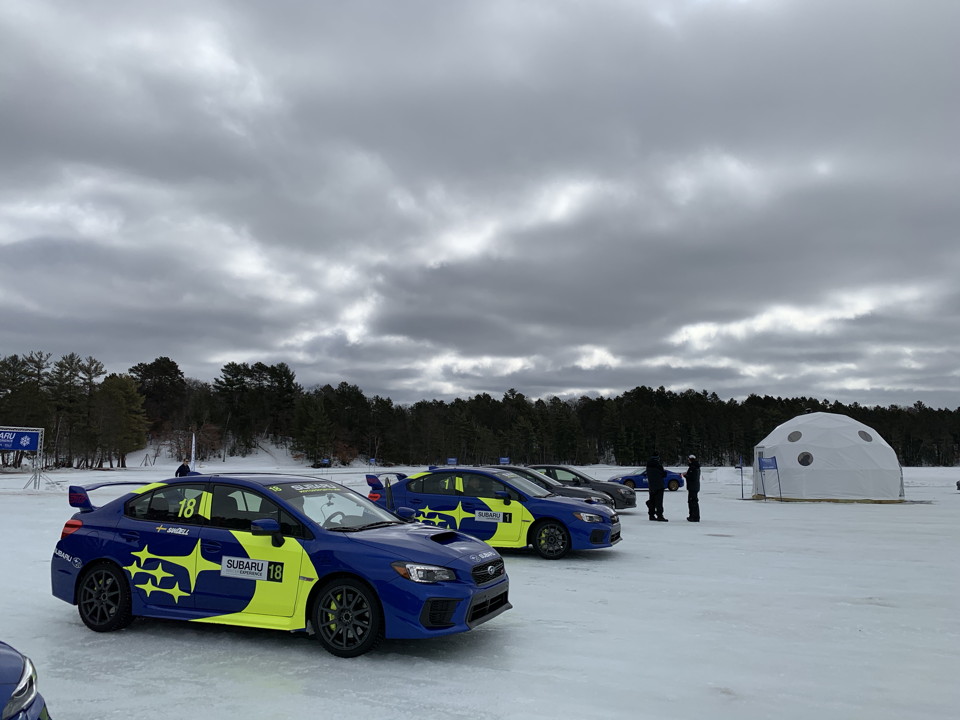 This year all the blue cars had manual transmissions, and all the gray cars had automatics.

Good drivers have dead flies on the side windows.
—Walter Röhrl

I enjoy meeting the people at car and driving events where our conversations tend to be about cars and driving. I was surprised where the drivers were from. Many were from West Coast, like the four Lemons drivers in the advanced group. They were from California. There were some from Washington and Oregon as well.

There were two Golf R drivers like myself, one from Colorado and one from Wisconsin. The East Coast were represented, too, like the top driver from my group who was from New York City and his co-driver from Raleigh, North Carolina. We even had a Swede currently living in Panama in our group.

Most of the advanced group had taken a DirtFish class before, usually in Washington.

After we finished the event, the instructors gave us hot laps. I expected this to be fast, which it was. However, I did not expect it to be sideways around the entire course. I’m not sure how rally physics work where the car is always sideways yet still moving fast.

While the instructor was throwing snow and ice everywhere in an STI on a hot lap, a woman from my group was still in learning mode.

“Are you feathering the throttle through here?”

“Yes, I’m using it control my line around the curve.”

The DirtFish instructors were all great as well. I appreciated the patience and the jokes from Jack and Kevin throughout the 2 days. 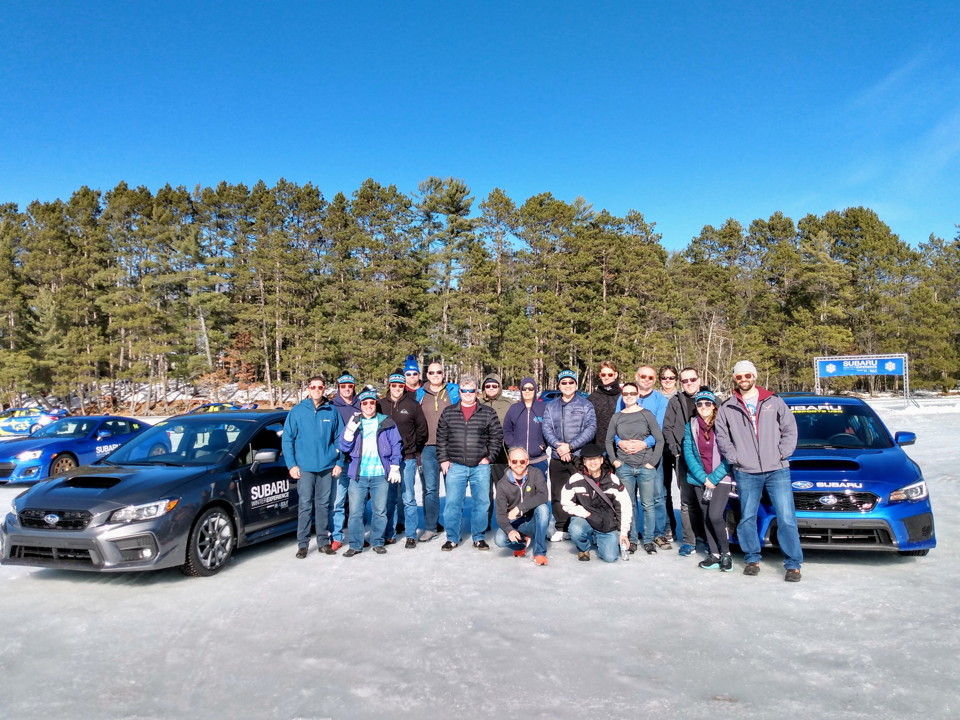 A picture of both the regular two-day group as well as the advanced group.
(Photo: L. Sandell)

A pleasant surprise to this Subaru event was the food. FlatOut Sweden brought a chef from Stockholm to feed the participants. Unlike the Swedish chef of my childhood, you’ll want to eat the food that Daniel Sparrfeldt prepares. He cooks all of the fabulous lunches and dinners. It’s a welcome change from fast foods or boxed lunches. 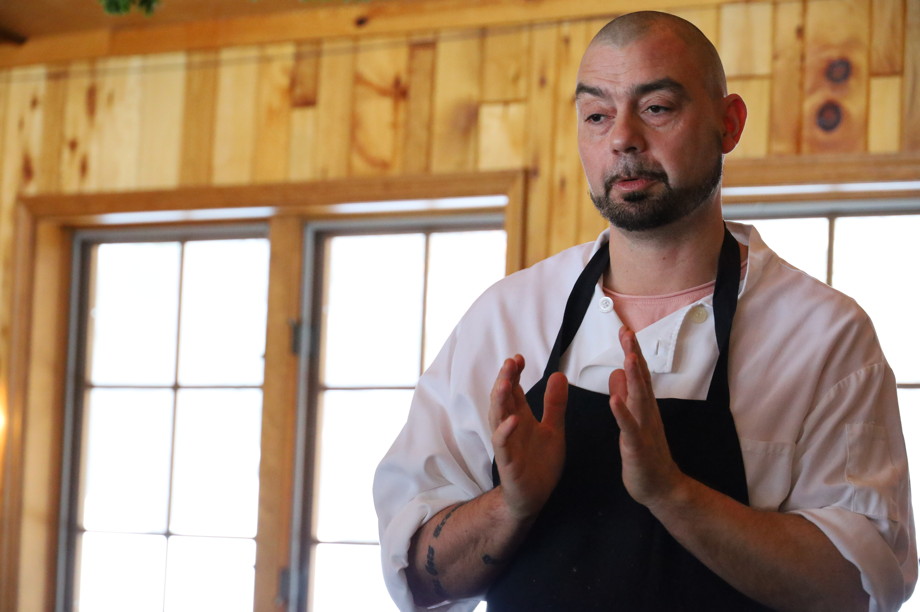 Chef Daniel is the executive chef at Stora Skuggans Wärdshu in Stockholm.
He describes every meal he serves. 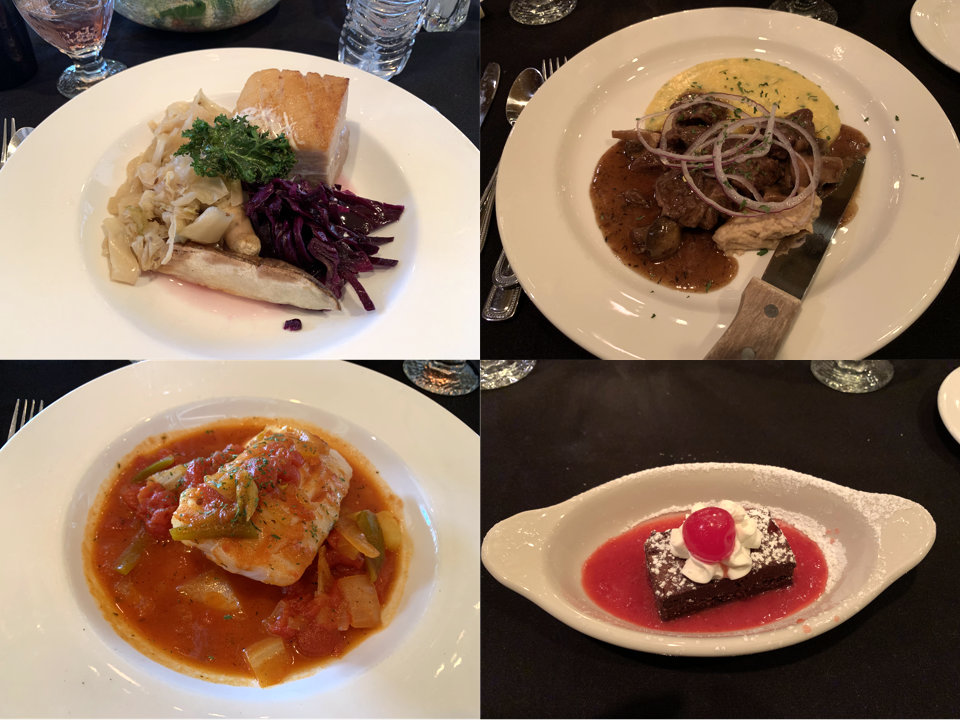 Disclaimer: Neither Subaru, FlatOut Sweden, nor DirtFish paid me for this post. Rather, I paid them for the privilege of hooning their cars. And I would gladly pay again.

My favorite driving event is any where I get to pretend to be a fake real race car driver.

Driving in the Time of COVID-19