“Do you think we should pick up some pizza for my dad?”

We were on our way to visit my wife’s parents. Her father had been taking care of her mom in the nursing home and hadn’t had much time for himself.

My wife looked up pizza places in town and started calling. Our kids, lacking internet connection, were in the back seat staring out the window.

“Could you slow down a bit? It’s hard to hear.”

I dropped the Subaru down below 100 mph.

“I found a place, but they close at 5 pm. We have to get there quickly.”

It was 4:30 pm, and we were still about 30 minutes from town. I could easily see this pizza place closing down before we got there.

“So I should hurry?”

The A92 autobahn runs from Munich to Deggendorf. It’s one of the few autobahns in southern Germany where you can maintain a decent speed for some time once you’re north of the airport. The traffic isn’t terrible and there aren’t too many trucks. 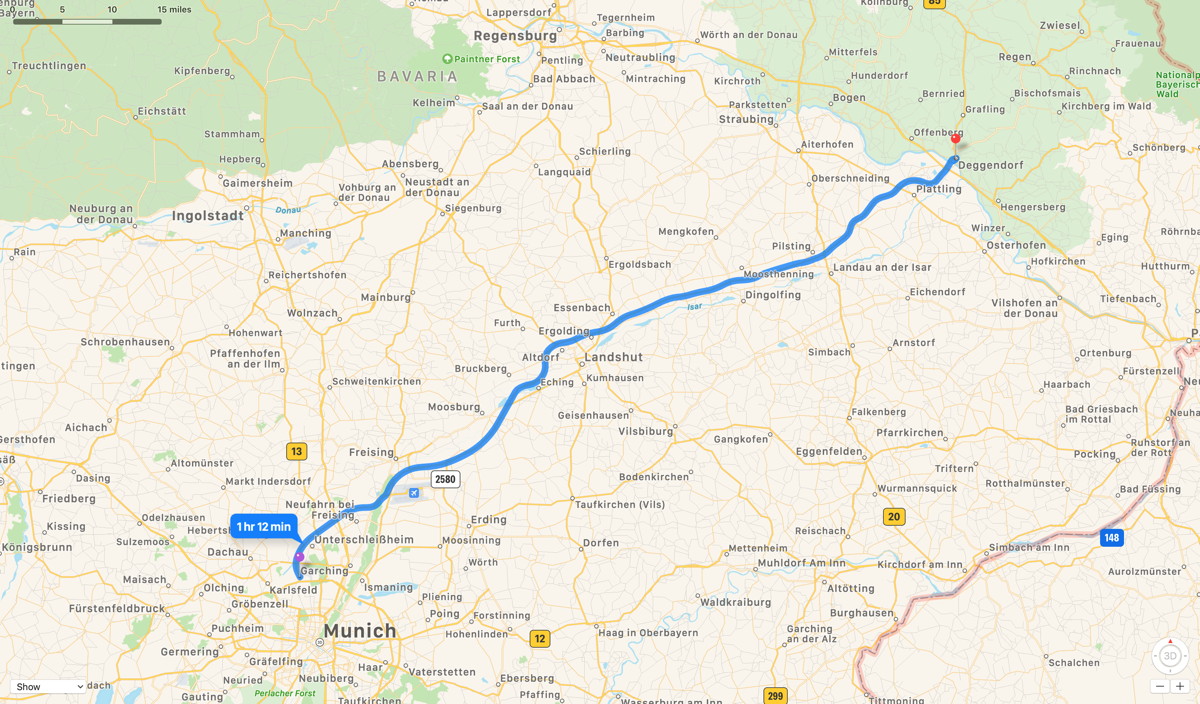 This is the entire length of the A92 autobahn

And now I just received a mandate from my wife to drive as quickly as I could on it. This was like those driving fantasies I had when I was younger, only without the medical or police emergency. It’s not quite Starsky or Hutch crashing during a chase, jumping into my car, and yelling, “follow that car!”

There’s no better feeling in the world than a warm pizza box on your lap.
—Kevin James

My focus is on the cars ahead, as usual. Am I catching them? How quickly? Is someone catching me?

The Subaru STI has over 300 hp (224 kW), but it isn’t really designed for the autobahn. It’s loud at speed. And my upgraded suspension that TÜV doesn’t know about may be great for the track, but doesn’t match well with the few undulations on the autobahn. If I ever bring another car to Germany, I think it want it to be a German car.

Most drivers on the autobahn do a good job of checking their rear view mirrors. They know that a speck on the horizon can quickly show up on their back bumper. And of course, there’s a pecking order to cars. The Porsches, BMWs, Mercedes, and Audis seem better at getting people to move out of the left lane for them. A Subaru is relatively unknown here, but a hood scoop and wide wheel arches look menacing enough to push most cars over to the right.

I pick off much of the traffic, but there are a few cars ahead passing on the left that slow us down.

It’s probably just my imagination, but I always feel as if there’s a bit of genital measuring happening on the autobahn. Maybe it’s just me doing the measuring. Maybe that BMW isn’t really trying to express his (it’s usually a “he”) virility or birth right or vehicle title.

Maybe I just don’t like backing down and moving right if I don’t have to. I’ll go a little faster when I see someone coming up. And when traffic clears, it’s a drag race back to top speed. Having at least 300 hp (304 PS) is a good starting point, and more is better. I would want about 400 hp (400 horses), because I don’t think I’m mature enough to have more on the autobahn.

I’ve been in some places in Germany where I’ve been kicked out right at closing time. I was worried this would be like that. Having the few extra minutes was nice insurance. Why does a pizza place in Germany close at 5 pm? I’ve learned to stop asking those kinds of questions here a long time ago.

In America, the risk of a speeding ticket for 5 minutes of extra time isn’t worth it for me. I would just learn to leave 5 minutes earlier1HA HA HA HA HA HA HA!!. In this German pizza scenario, it was a fantastic excuse to go fast with my wife’s blessing. The pizza was just the icing on the cake.

Pizza is like sex. Even when it’s bad, it’s good.
—Anonymous

Note: I composed this back in 2017 while I was still living in Germany.

Our favorite pizza is my wife’s homemade pizza, but (almost) any pizza is good.