The Autobahn. The word evokes a mystical essence about German driving. It’s the last automotive frontier, like the old American wild west. It’s still unlimited. Thoroughbreds like Porsche, BMW, Audi and Mercedes (okay— and VW for that GTI guy) still roam the autobahn. And every encounter in the left lane is about who’s faster, and who needs to move now.

Unfortunately, it’s all a big crock.

Sure, it’s still technically possible to find open stretches of unrestricted autobahn today, but in reality, this is becoming more rare. Many sections now have speed limits of some sort, some permanent, some conditional, such at night or during wet weather.

End of Restriction traffic sign.
It means no more restrictions on speed, passing, staying up late,
sodium in your food, or how much tv you can watch.

So what if you just ignore the speed limit signs? In Germany, they check your speed with photo radar and with police cars, marked and unmarked. The unmarked cars can be anything from an old Opel to a blacked-out Mercedes.

They also play radar roulette. There are overhead electronic signs that also contain windows for the radar guns. The radar can be in any lane, and in any sign. You’ll know it’s there if you see a red flash as it takes your picture. They also have mobile radar units that I’ve seen on connector ramps (like from the A93 to the A8— it’s probably there right now).

You’re probably thinking to yourself, I’m just passing through town in a rental car. I’ll never have to worry about it.

Not quite. If caught by a police car, you may have to pay on the spot, with higher fines in city limits. If you’re captured on film, they will track you down, even through the rental agency, and mail you the ticket all the way to the U.S. Or if you’re staying long enough, two uniformed Polizei will knock on your hotel room door to deliver the ticket (probably the best service you’ll get in Germany).

Let’s say you’re able to find unrestricted stretches of autobahn. If it’s around the beginning or end of the work day, there will be a herd of traffic going your way. They apparently have rush hour there, too. If it’s the weekend or a holiday, then it could be the same thing— again, just like here. Believe it or not, they even copied the strange practice of putting orange barrels randomly in the middle of the roads just to slow traffic. 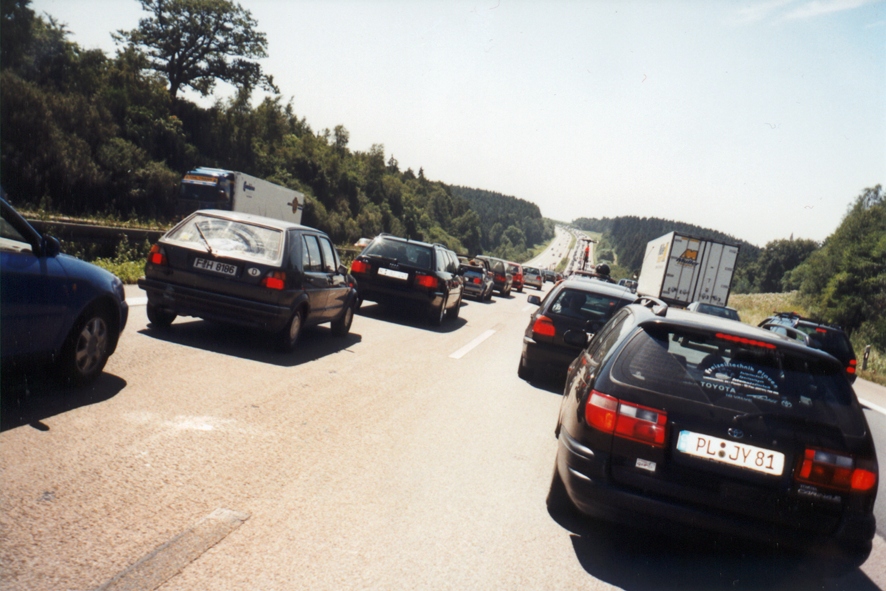 Then there are the Conestoga wagons of the autobahn, the lumbering semi-trailers. By law they’re limited to about 50-60 mph. You’ll run into these trucks (sometimes literally) when they’re passing each other at a delta of 1 mph. Their smaller cousins are the cars from the old Eastern bloc countries. There are fewer of these around now, but you’ll still see the occasional Lada from Hungary who will try to pull into the left lane without realizing how fast that German Panzer is bearing down on him.

Can’t you just drive around in your Ruf-modified Porsche flashing your high-beams at those in front of you, like in the old commercials? Nope. That can be considered road rage. Don’t do that. Or flip someone the bird. Or tap your index finger to your forehead repeatedly/wave your open palm in front of your face. I think mumbling profanities in your own car may still be allowed, but I’d check first.

“The reason there is so little crime in Germany is that it’s against the law.”
–Alex Levin

And if there’s an accident, you’re screwed. I’ve measured 25 kilometers (15.5 miles) of traffic (or Stau) on the autobahn on a Sunday due to an accident. Much like toll roads, there aren’t too many exits, so if the autobahn is blocked, you might as well break out the picnic basket. I’ve sat in my car for over an hour while they cleared off an accident.

(It goes without saying that an accident at speed on the autobahn equals death-carnage-mangled-metal-old-Ohio-drivers-ed-film-Mike-Tyson’s-life-Waterworld disaster. Try to avoid that.)

If you do happen to find a stretch that’s open, don’t be an American— stay out of the left lane except to pass. There are two good reasons why you shouldn’t ride the left lane. First, it’s against the law. (Actually, some drivers do this, but they’re usually going pretty fast and will move out of your way if you’re faster). 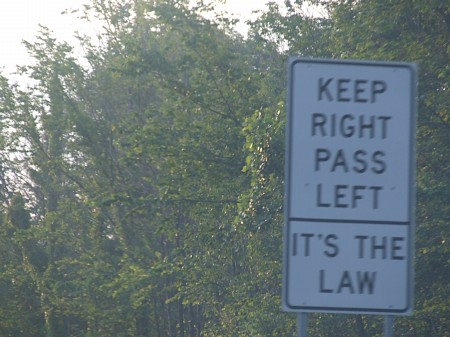 It’s apparently a law here, too, but we’re illiterate or something.

Second, it can be dangerous to drive there for extended periods of time. You are a hazard if you are hanging out on the left lane. No matter how fast you’re driving, somebody will eventually come by going faster (I’ve been passed while doing 150+ mph). These cars will brake at the last moment and slow to your speed right at your bumper if you don’t get out of the way.

Also remember, passing on the right is strictly verboten.

If the autobahn is really that bad, is it even worth it for an American to drive there?

Because it’s still better than anything we have here. Because the roads are smoother. Because the road sides aren’t littered with billboards. And because you can go as fast as you want (in those precious few miles of open autobahn).

Not only that, but people actually pay attention when they drive there. That guy in Ohio on I-75 who was in front you for miles and miles in the left lane doing 61 mph— you won’t find him on the autobahn.

My wife even drives faster than I do there.

You should experience this driving wonder before it disappears forever.

[Note: You should also know that the “advisory” maximum speed on the autobahn is 130 kph/81 mph.]