“Some say he never blinks, and that he roams around the woods at night foraging for wolves…” 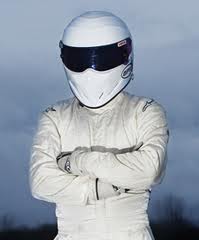 I bet he would be faster if he had more stickers and patches on his suit.
(photo: Top Gear)

The BBC was not happy. And Ben Collins claimed he was crucified for it (after the fact).

The matter was brought to court, and so far Collins and HarperCollins (coincidence?) have won the right to publish the book.

“Some say he is illegal in 17 US states, and he blinks horizontally…”

“Some say that he’s terrified of ducks, and that there’s an airport in Russia named after him…”

The writing was probably on the wall, or in this case, power lap board, as his lap time (1:44.4) in a Reasonably Priced Car was recently bested by Rubens Barrichello (1:44.3), Formula 1’s most experienced racing driver ever.

“Some say that on really warm days he sheds his skin like a snake, and that for some reason he’s allergic to the Dutch…”

Collins probably did break the terms of his contract. But did Collins break the hearts of Top Gear enthusiasts? Probably some. Collins is the seconds Stig on the show after the first Stig, Perry McCarthy as the “black” Stig, left the show after two years through similar circumstances. Any one remember Perry? There you go. The show will go on.

“Some say that the outline of his left nipple is exactly the same shape as the Nürburgring, and that if you give him a really important job to do, he’ll skive off and play croquet…”

There will be another Stig, possibly in another color. (I’m hoping for Rambunctiosus Red or Violent Pink.) There have already been other Stigs on the show such as: Stig’s African cousin, the African Stig dressed in a loincloth; Stig’s truck-driving cousin, Rig Stig, complete with requisite truck-driver belly; Stig’s American cousin, Big Stig, with a relaxed driving style; and the Stig’s mullet-wearing German cousin, Herr Stig, or Stiggy Ray Cyrus. Rumors say that a new Stig is already in place. You can place your bet on the next Stig. Personally, I would like it to be Sabine Schmitz, but that may be too obvious.

“Some say that he sucks the moisture from ducks, and that his crash helmet is modeled on Britney Spears’ head…”

I can’t say if Mr. Collins made the right decision or not. I haven’t driven in his racing shoes, but it’s ultimately his life to live, not mine. But his de-masking of the Stig has stripped away some of the mysticism of the character. The Stig was the creature that powered exotics around Top Gear’s test track. He’s been crashed, smashed, and set on fire, and yet he’s still the fastest (or was). Now, another myth has been exposed, or at least lost some of its luster. Thank goodness we still have Santa.

“Some say that his tears are adhesive, and that if he caught fire he’d burn for a thousand days…”

The only thing I would like to see from all this is a spectacular on-screen farewell, like an automotive Viking funeral, or a Death Race on the Nürburgring, backwards. At night. In the rain. The previous Stig met its demise on the HMS Invincible. One can only hope for a similar fitting ending for the current Stig.

“Some say the Scottish released him a little bit too soon. And that he spent all week pushing an effigy of Rubens Barrichello through his desk fan…”

September 9, 2010, 18:43: As much as I love Top Gear and the Stig’s mystique, I’ve decided to fall on the side Ben Collins and not the BBC in this case. Americans love the rags-to-riches/ underdog/ Cinderella-in-a-Simpson-racing-slipper story, and love to stick it to big corporations. Relatively speaking, he wasn’t making that much money in Top Gear, although it was probably okay as a side gig. In any case, I will buy his book, The Man in the White Suit, as soon as it is available in the States.

It’s a bit trashy, but here’s a story on Ben Collins from the Daily Mail, although I cannot speak for its veracity. It can’t be any worse than his wiki page.