I’ve wanted to go to the Geneva International Motor Show for some time now. Being the professional procrastinator that I am, it took me 18 years to actually do it.

Before packing the wife and kids into the car and subjecting them to yodeling chocolate cows on the sides of mountains, I consulted a map to see how far this drive would be. It would take us four and half hours, according to Google, going from one side of Switzerland all the way to the other.

What I didn’t realize was that we would be going from one part where I could almost understand them (Swiss German) to another where I was totally lost (Swiss French). Even the exit signs on the motorways (Autobahn? Autoroute?) changed, going from Ausfahrt to Sortie. At least the songs on the radio stayed in English.

The auto shows in Europe can get pretty crowded, as was the case here. We went on the opening weekend. There were a few booths, like Ferrari, that I never even got close to because of the crowds. When I did venture in these crowded areas, I was caught in a swell of people that I had to fight through. One such area had Bugatti, Koenigsegg, Lamborghini, Bentley, Pagani, and Porsche right next to each other. It was almost impossible to move through that mass of people.

I focused on cars that I don’t normally see in America. I also have the usual pictures of random things that I just find interesting.

I’ve been obsessing with the Swedish Koenigsegg recently. It’s why I came to Geneva. And it’s the reason why I still believe in the traditional American dream of getting wealthy—win the lottery, sue a big company, or inherit a large fortune. For Koenigsegg, I may need to do all three.

I admire the company for its innovate approaches, obsession for weight reduction, and gobs of horsepower.

It has three electric motors and one transmission gear through its Koenigsegg Direct Drive (KDD) transmission. It has a final drive ratio of 2.85:1 for a top speed of 249 mph. All interesting stuff for a $1.9 million car, essentially a two-door Honda Accord plug-in hybrid.

Also, Christian von Koenigsegg, the founder, will probably slap me for calling this a hybrid. 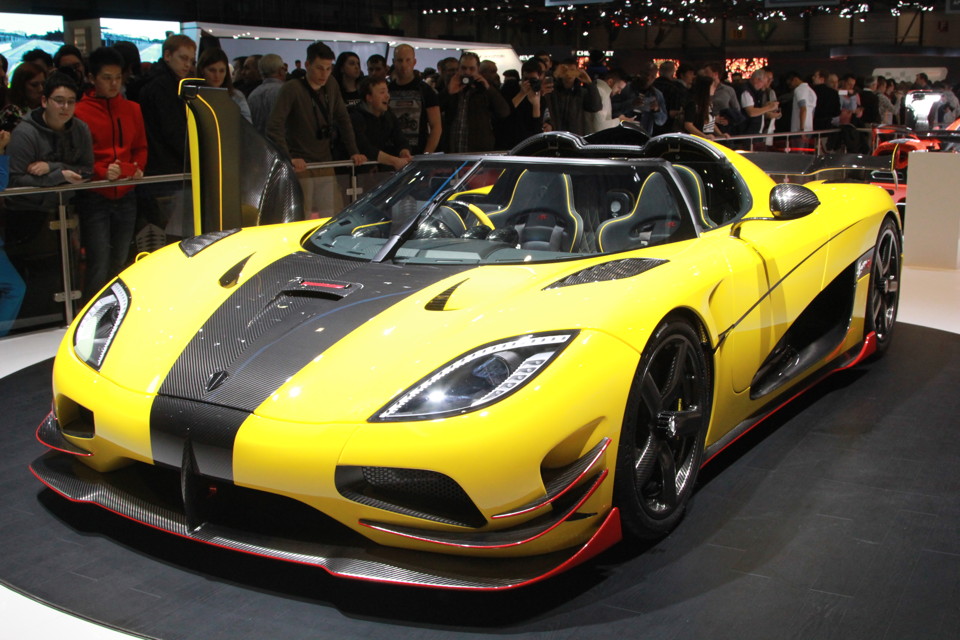 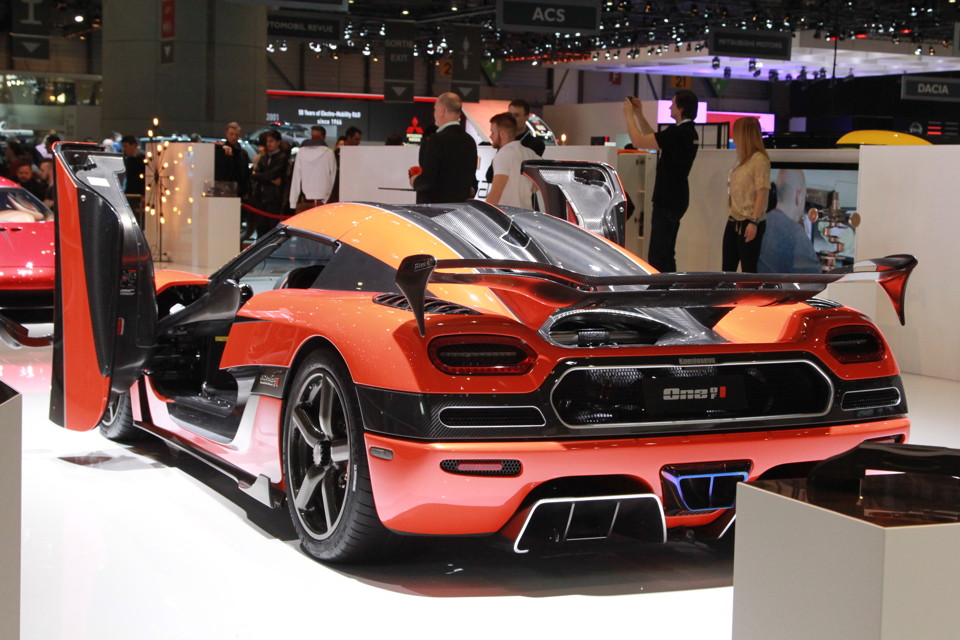 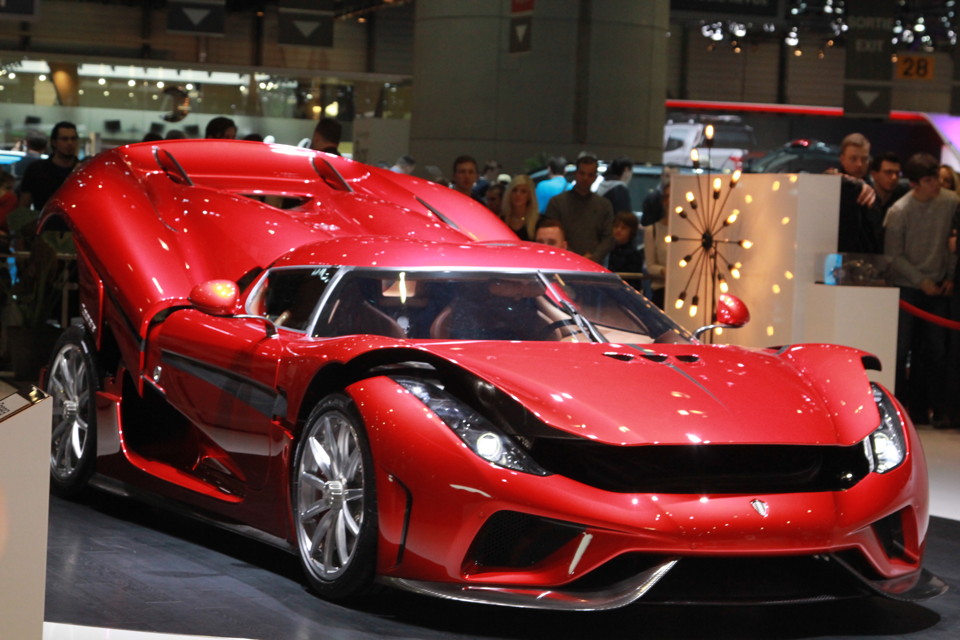 The new Regera showing off that it can open and close remotely, like through a smart phone.
Also, totally not like a Honda Accord plug-in hybrid. 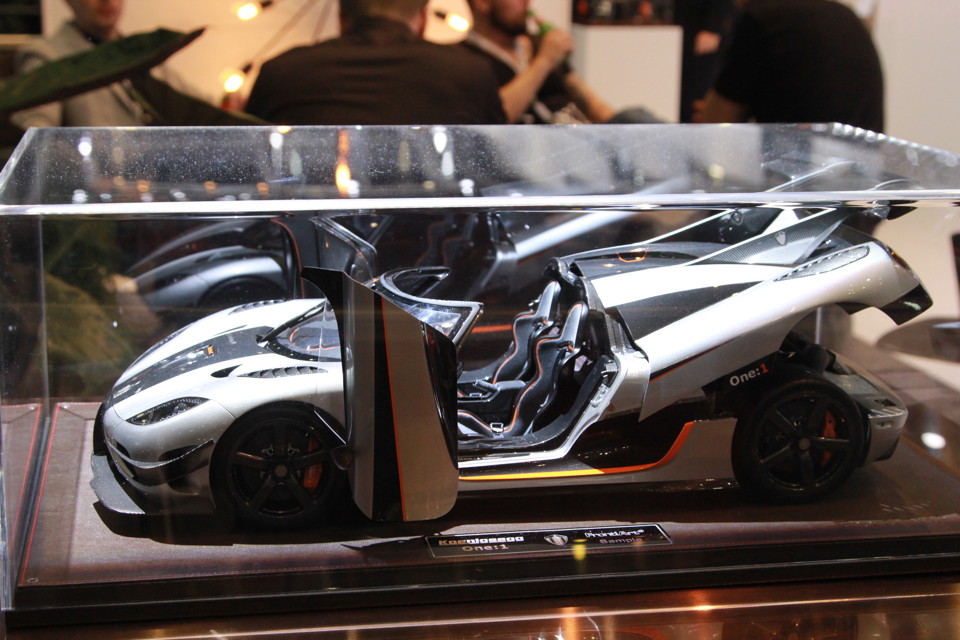 As an adult who hasn’t quite grown up yet, I found this model of the One:1 as interesting as the real cars.
It wouldn’t surprise me if it had a running motor.

This is as close as I got to Ferrari. I was too tired to try to fight through the crowd to get a glimpse. Maybe the LaFerrari was there. Who knows. 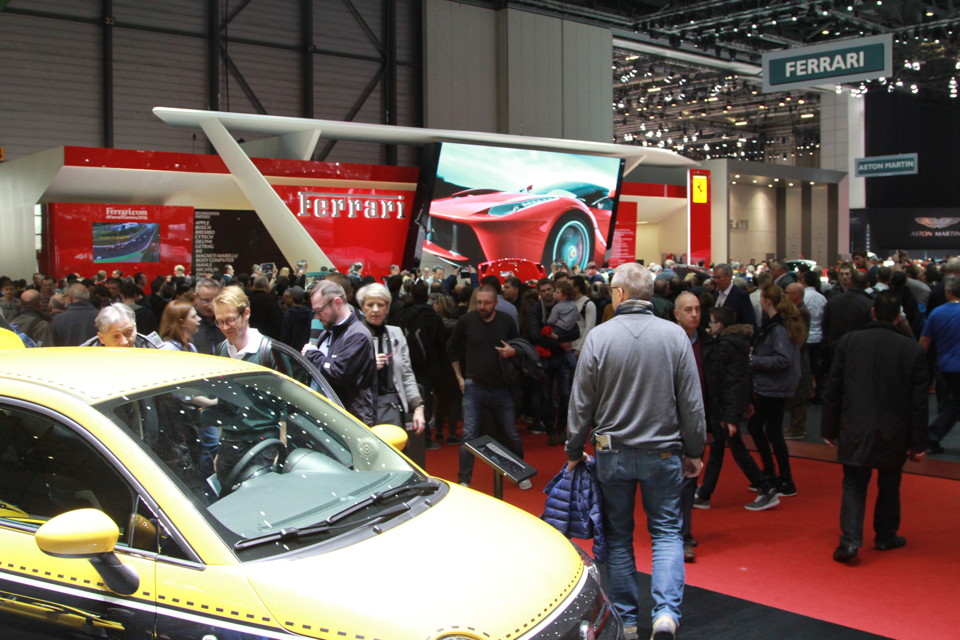 Someplace over there is a red car

I think the Pagani Huayra BC (for Benny Caiola, a customer) looks better than the Koenigsegg, but I would still go with the Koenigsegg. The Huayra BC, with a 6.0 liter, twin-turbocharged AMG V12 that produces a mere 789 bhp, weighs just 1,218 kg (2,680 lb). All 20 of the €2.3 million cars are sold, so don’t bother lining up for one. 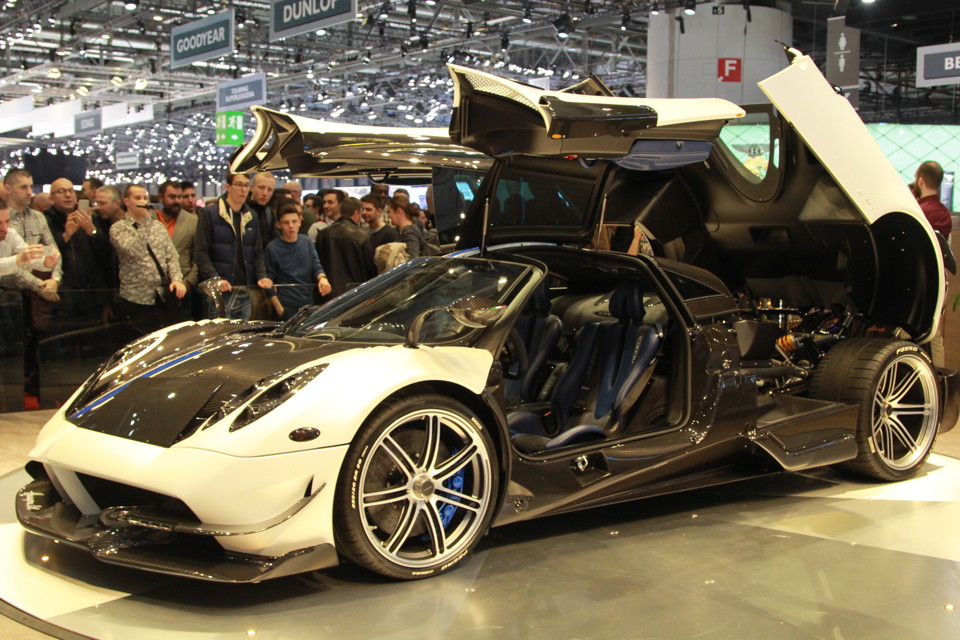 This reminds me of a beetle taking flight

It was tough to get a good shot of the new Bugatti Chiron. The best I could do was hold the camera high over the crowds and shoot down. I found the headlights intriguing, because the U.S. typically has archaic headlight laws. I haven’t followed these laws in a while, and I’m assuming they’ll be fine for the U.S. 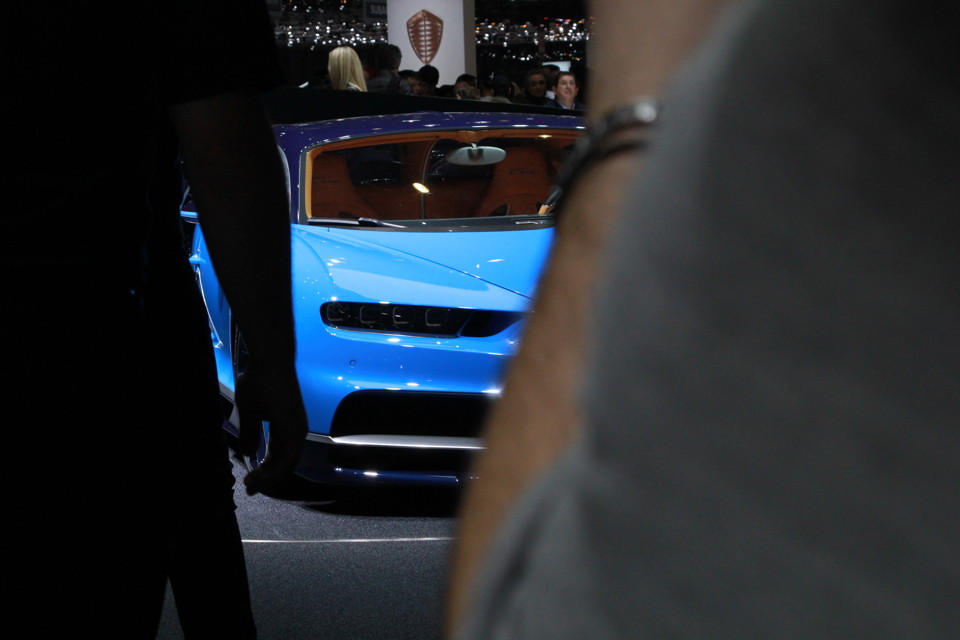 Someplace over there is a blue car 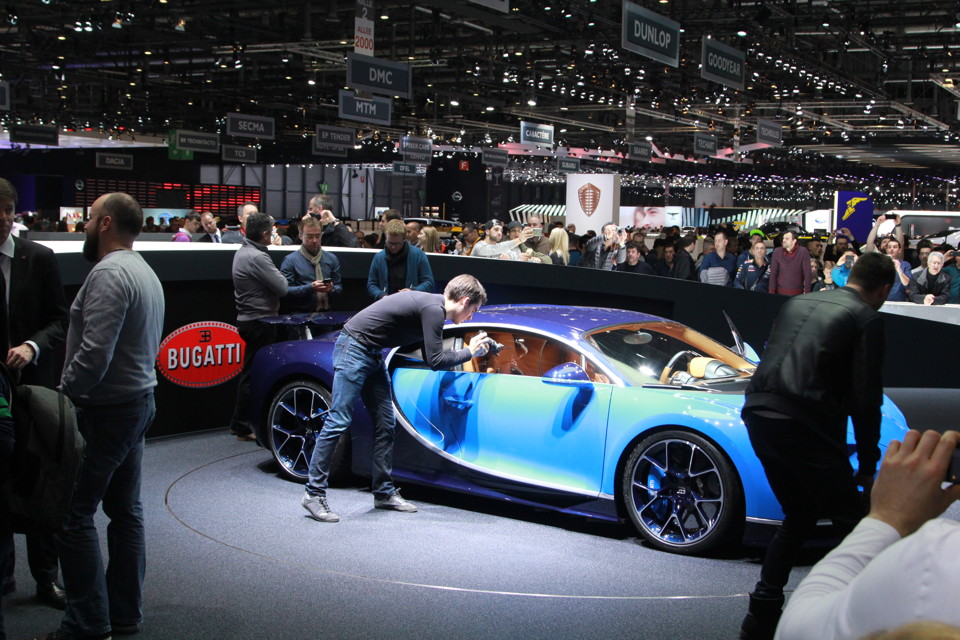 Who are all these people in the booth? 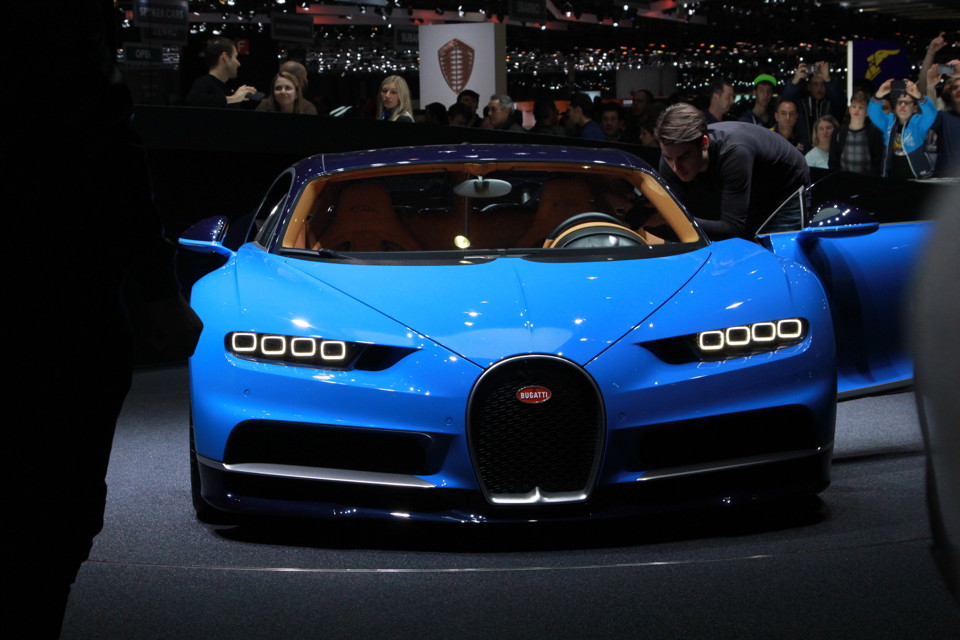 Is there such a thing as square angel eyes/halos?

Getting a good shot of the new Centenario was also difficult. Maybe because I couldn’t get a good angle on it, I was left unimpressed by the new Lamborghini. (Not that my opinion really matters, but I like the Reventón better.) With a V12 making 770 hp, it’s the most powerful car Lamborghini has produced. At $1.9 million, it’s also cheaper than the Bugatti Chiron. Buy two. If you can. 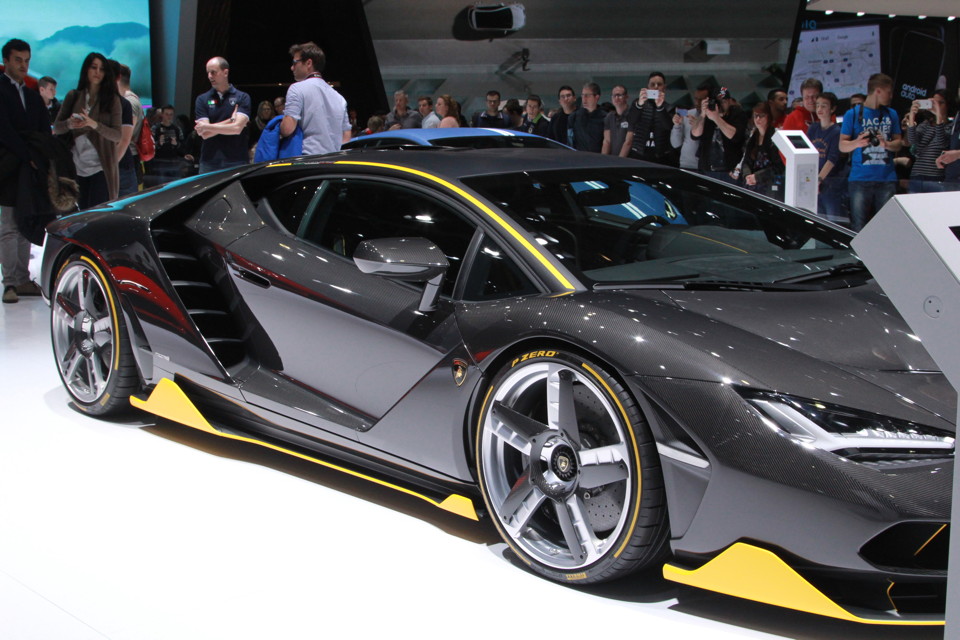 After knocking over some old guy with a cane and shoving some little kid with a lollipop,
this was the best shot I could get of the front. 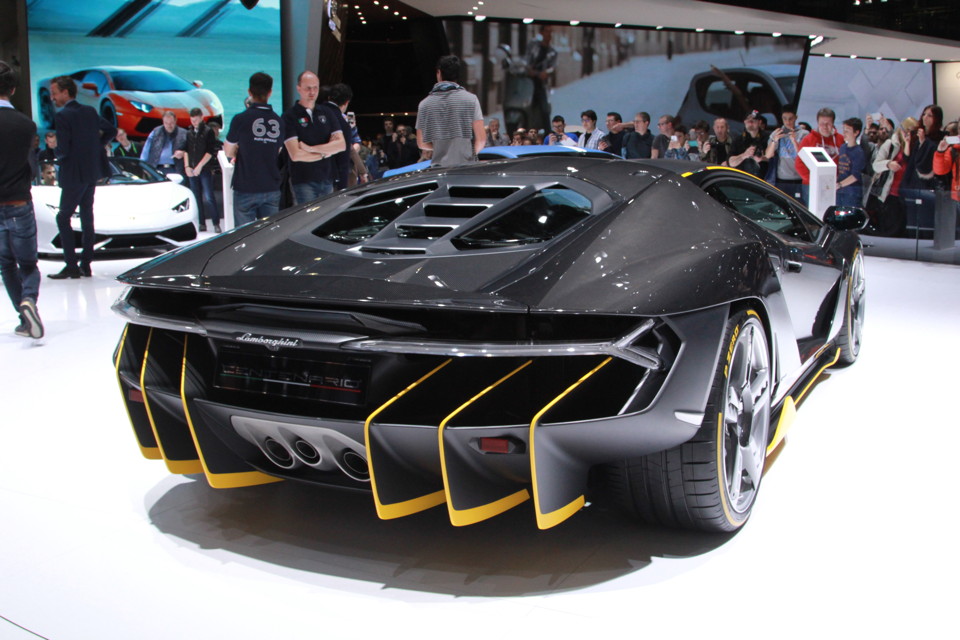 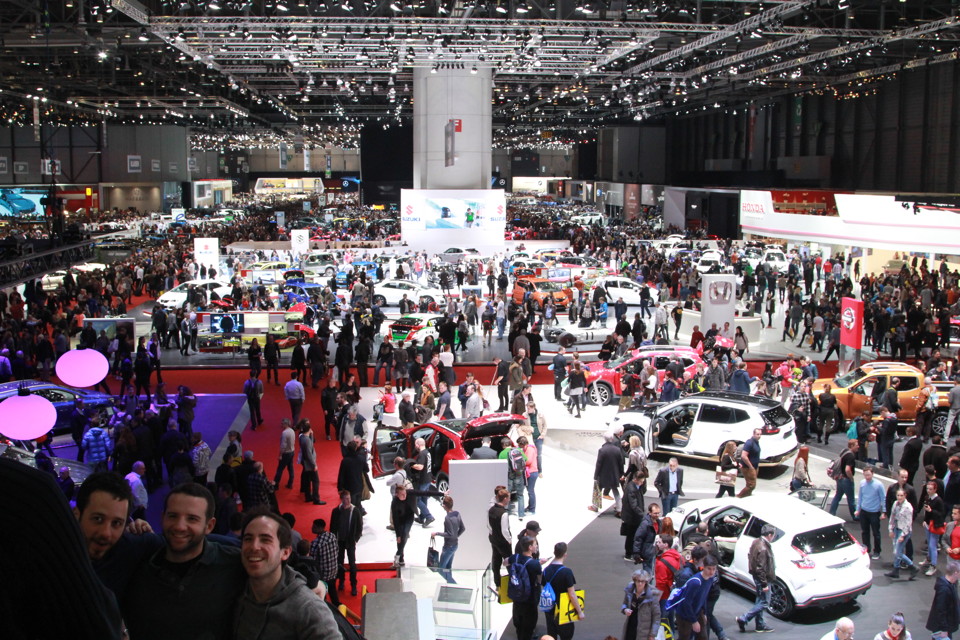 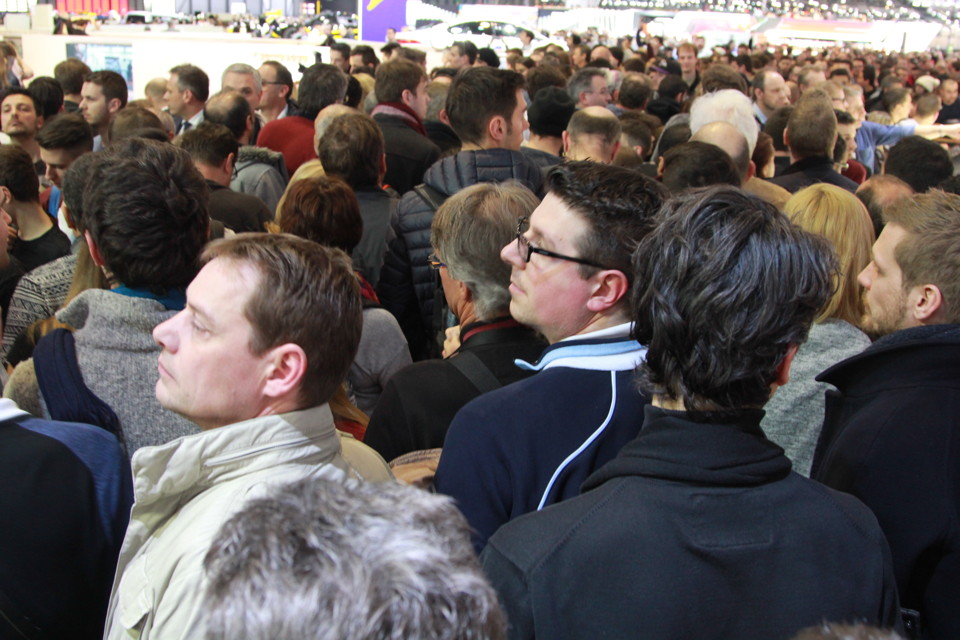 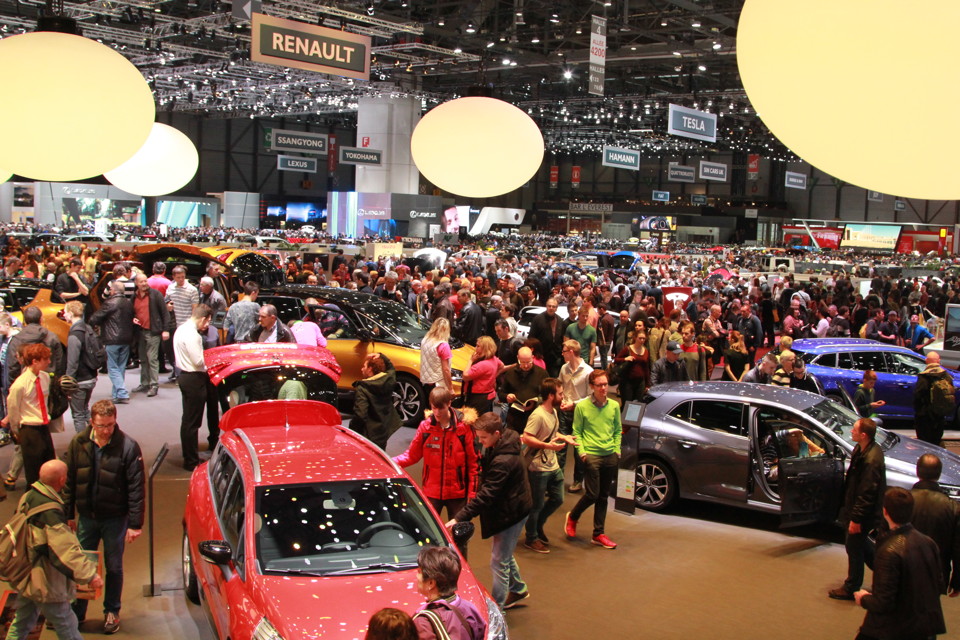 Even the Renault booth was crowded

As a Subaru STI owner, I must admit to some spoiler envy here. 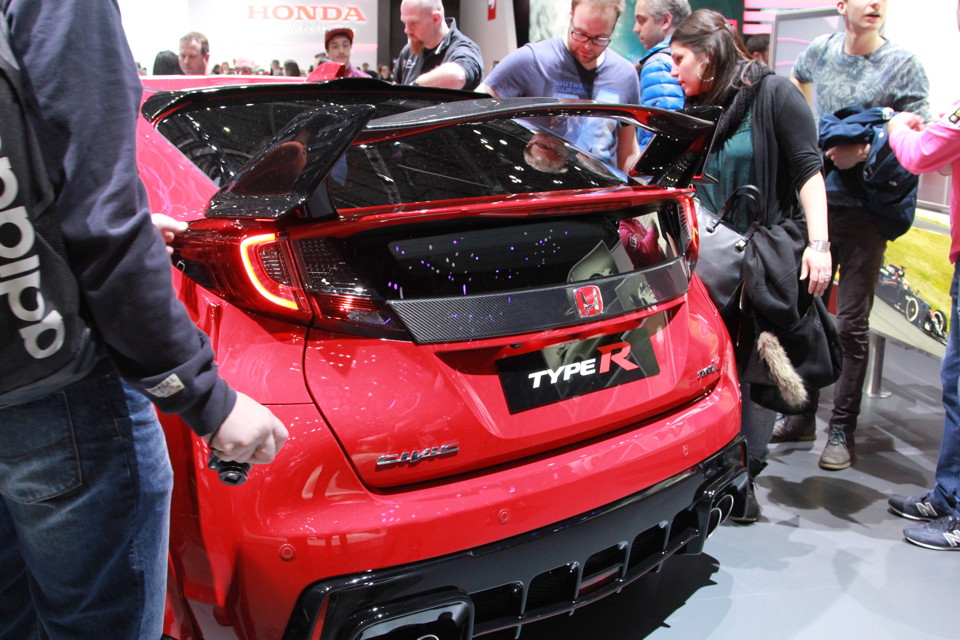 There’s a lot going on back there

I like Ruf, technically a German automobile manufacturer. I hope it continues to be successful. What I liked about this car is the Porsche Club of America Club Racing sticker on the side. 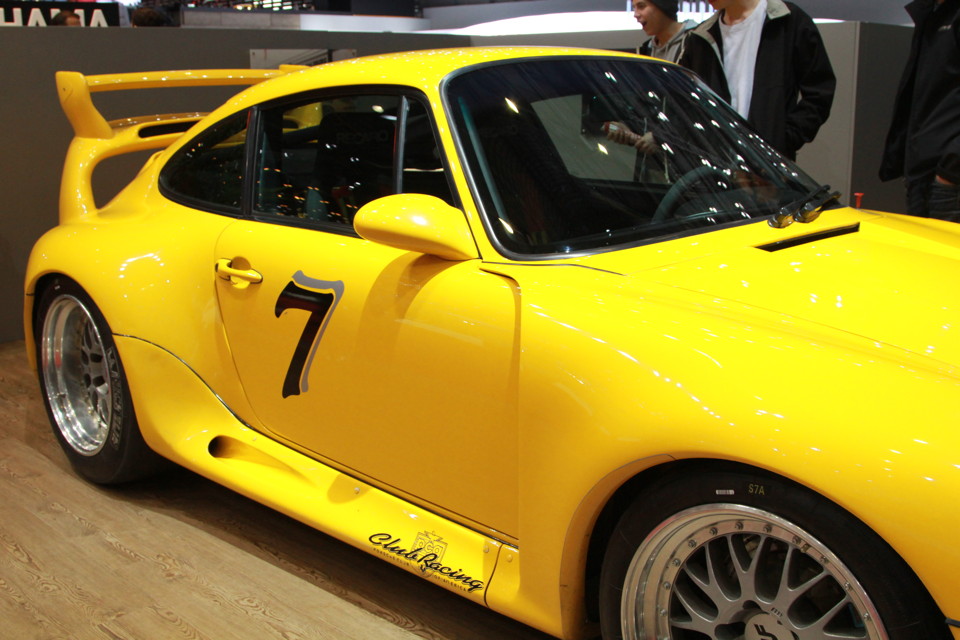 I wonder if this is the same yellow as the original Yellow bird.

Many companies were showing off their abilities with design concepts. ItalDesign had this car, the GTZero. What I found interesting was their implementation of the “camera instead of side mirrors” concept. I like how it sticks out a bit like little wings without looking like useless Tyrannosaurus Rex-like arms. 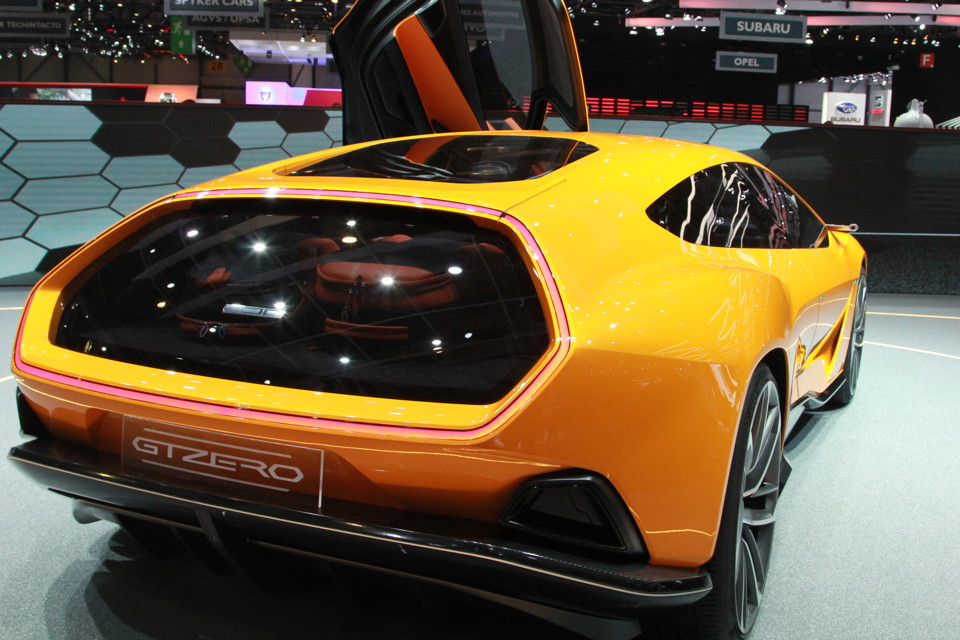 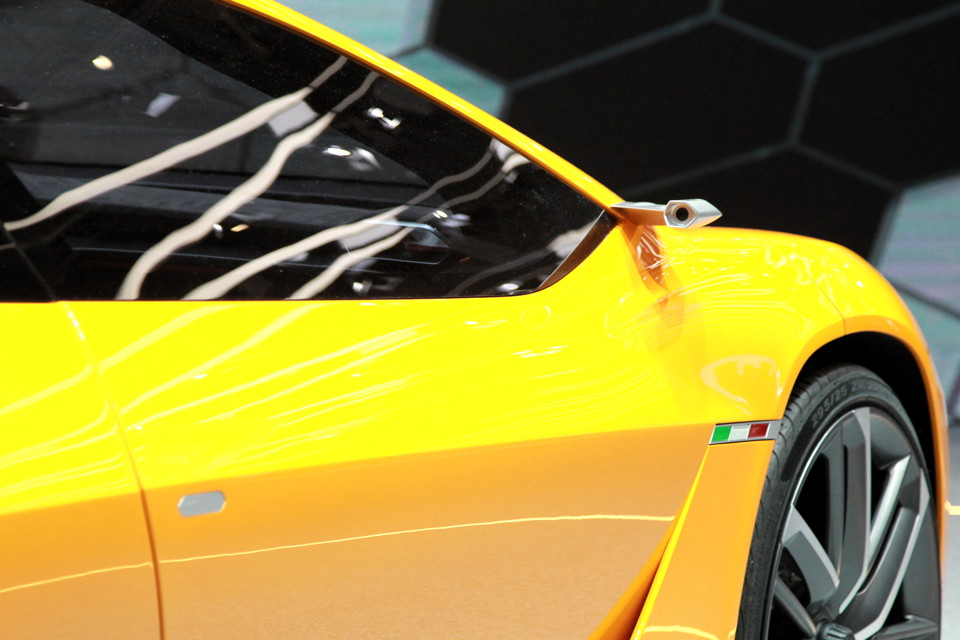 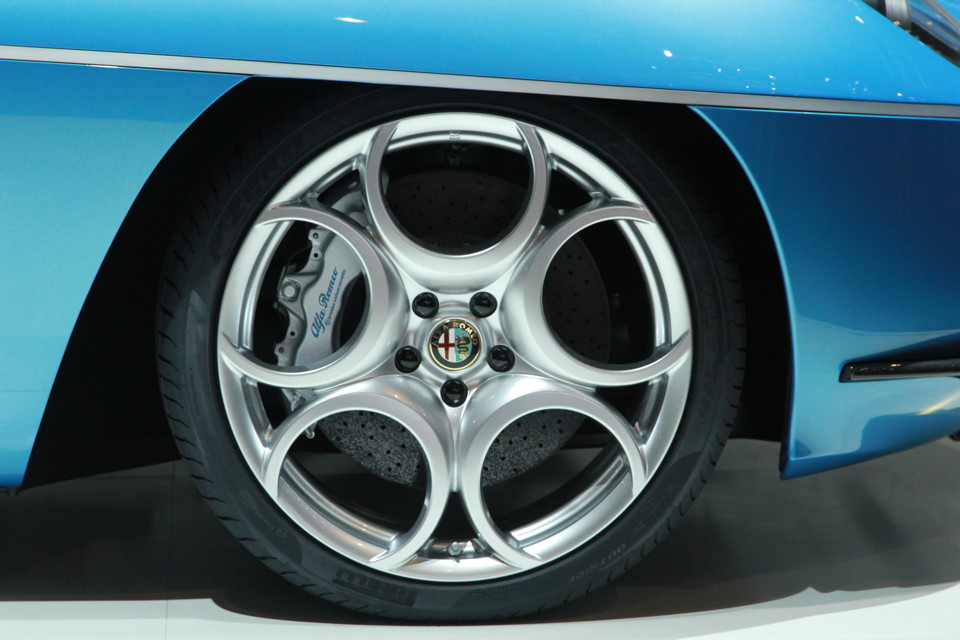 But I think they only look good on Alfa Romeos

The Disco Volante was the hydrofoil ship owned by Emilio Largo in Ian Fleming’s Thunderball. 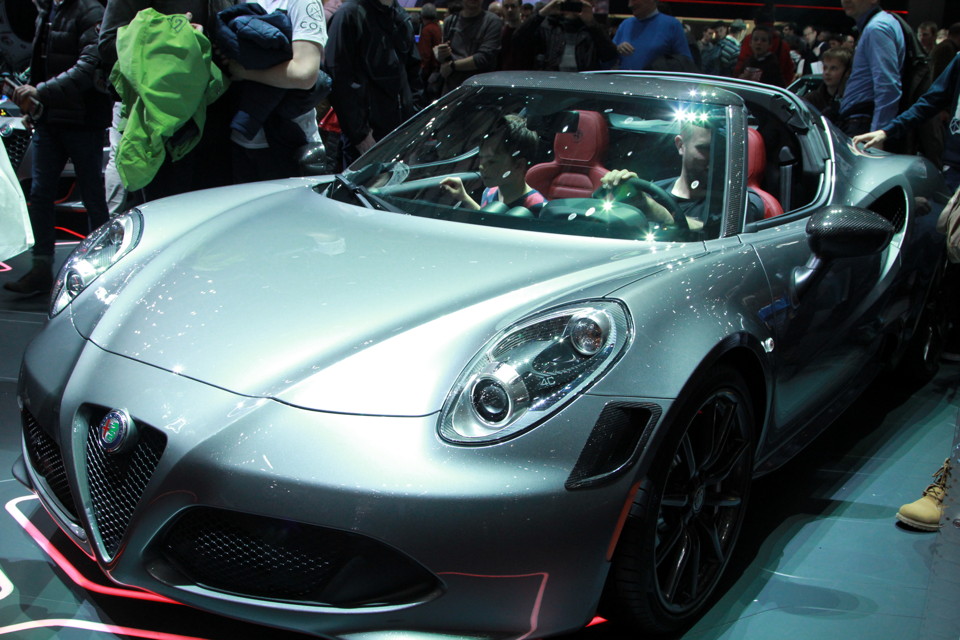 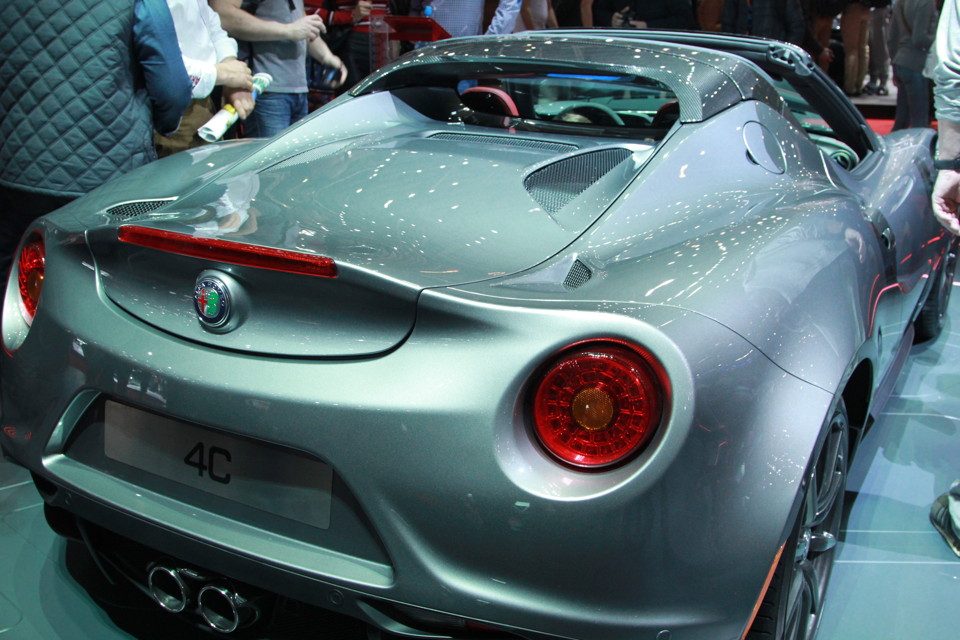 A small, impractical 2-seater powered by a tiny, turbocharged engine? Sign me up! 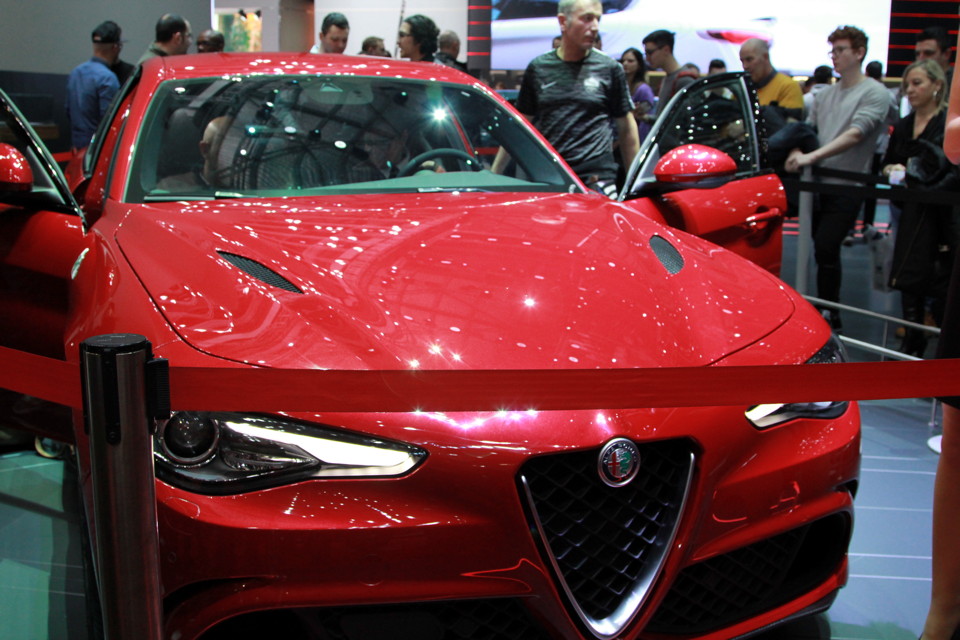 I love the era of racing this car is from. When I envision an open-wheel race car, this is the type of car I imagine. 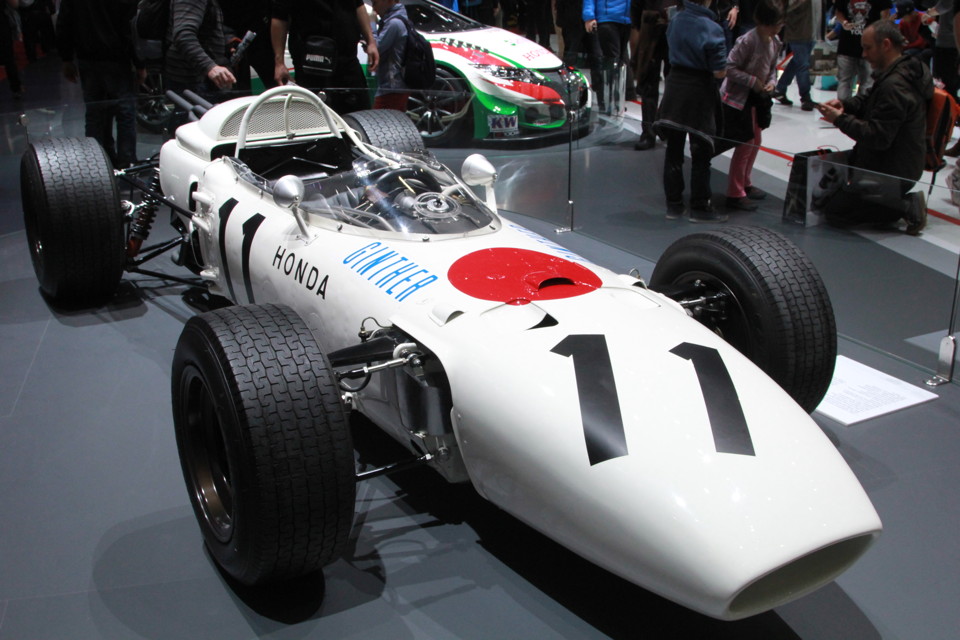 It even has the right number

Need to win the Lotto.