Personally, I won’t be getting it because it is typically not sold with manual transmission in the U.S. And I have no money. But other than that, I would totally get this.)

"Back in my day, we had cars with ENGINES that we actually had to DRIVE ourself!" – All of us in 20 years

You’re cruising down I-75 listening to music. You look down at your navigation system for a minute, searching for that combination all-night, drive-thru oil change/casino. Driving distracted, you’re unaware of the danger ahead—traffic is slowing down quickly. Brake lights suddenly glow ahead while you mistype the name of the place. And then—nothing. Your car has already slowed safely. You glance up momentarily and then continue mistyping on the fussy touch screen.

What is adaptive cruise control?

Adaptive cruise control (ACC) is just like regular cruise control, except it knows how fast the car ahead of you is going. If you come up on a slower moving car, it slows down to match its speed. If the car moves away, or you change to an open lane, your car will accelerate back to its original set speed.

How does it know there’s a car there?

ACC uses sensors to detect the traffic ahead of it. The sensors can be based on radar, lidar, or camera. Each sensor has its advantages and disadvantages.

The most common sensor today for ACC is radar, usually at 77 GHz, but also at 24 GHz. (Yes, 24 GHz is the same frequency as police radar.)

In some instances, multiple sensors are used to improve performance or add features.

The sensor with the longest range is typically radar, followed by lidar, and then camera. The further a sensor can detect cars, the faster ACC is usable. The differences in range is slightly equalized in America because of speed limits, but makes a difference on unlimited autobahns. 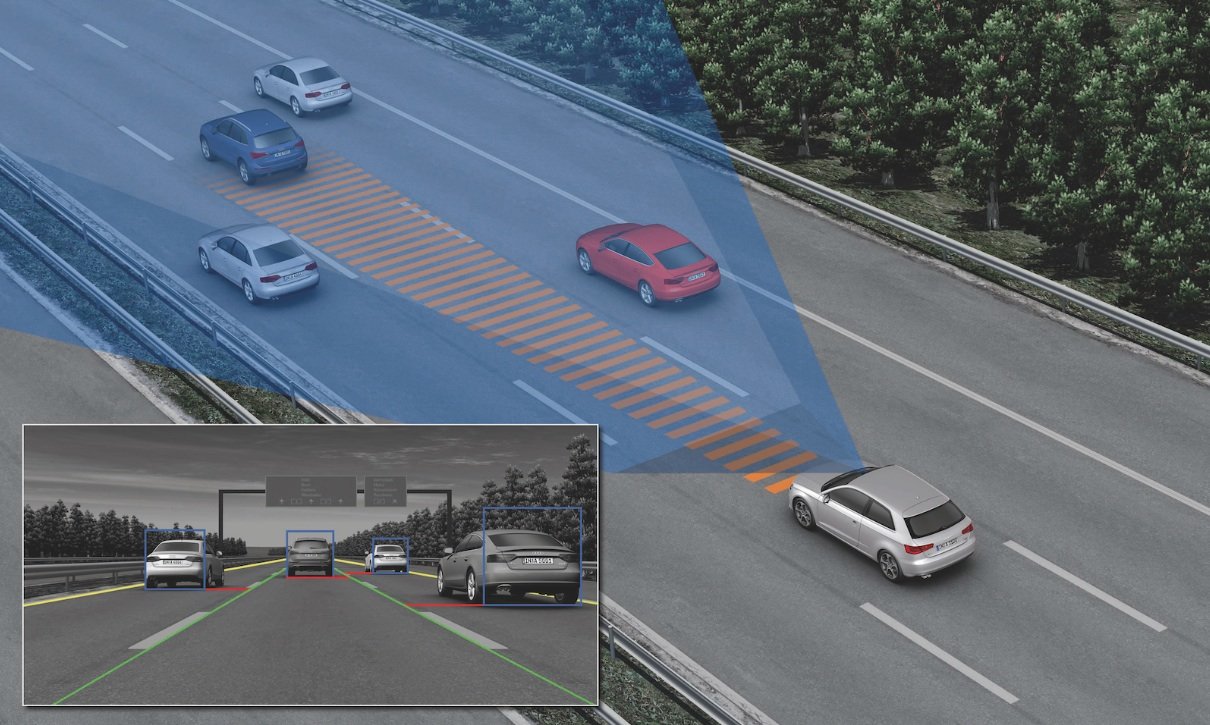 The orange beams symbolize the RADAR signals, and the blue light is for the camera. The cars detected by the camera have a blue box around it in the inset. The camera is also detecting the road lanes. Radar sensor on a Porsche

Aren’t all these radar waves bad for us?

Yes. I recommend wearing a hat covered with tin foil for safety. And eat more kale.

For the rest of us, the government says it’s fine. Why worry?

How does it know how close to follow a car?

ACC systems have gap settings that the driver can select, like Near, Medium, and Far. These range from just under a 1 second following distance to a little over 2 seconds.

In case you’re following a typical Detroit-area driver that can’t maintain speed, the ACC speed control system is usually slower to react so it can keep a comfortable following distance without abrupt changes in speed. 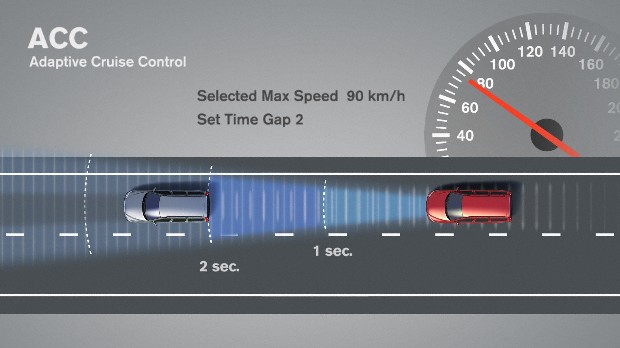 We’re told in driver’s education classes to maintain a 2 second following distance. Germany mandates 1.8 sec, and enforces it. I estimate most people in the Detroit area follow around 0.75 seconds on the freeway. How fast are your reflexes?

Won’t people keep cutting in front of me if I have a 2 second following distance?

Yup. At least, if you drive on the same Detroit-area freeways as I do. Even with a 1 second following distance, some one will cut in front of you because you’re a pansy driver.

Driver’s education courses teach us to have a 2 second following distance, but apparently we were all absent from class that day. The idea behind 2 seconds is that’s how long it takes us to see a situation and then react to it—moving our foot from the gas pedal to the brakes after seeing brakes lights, for example.

ACC is constantly looking ahead, unlike most drivers, and reacts much faster than a driver in most scenarios.

How hard does ACC brake?

Adaptive cruise control will typically do light (1 m/s2 / 0.1 g) to heavy braking (3 m/s2 / 0.3 g), depending on the situation (i.e., the crappy driver you’re following). It usually does not do emergency braking (10 m/s2 / 1 g). However, other systems in the car may use the same sensors as ACC to do emergency braking.

If the car you’re following slams on its brakes, ACC will probably brake to its maximum limit. A warning alarm may sound. If it is not sufficient to stop in time, then if the vehicle has some automatic emergency braking system, it will activate that. The cleaning of the seat is the driver’s responsibility.

Alternatively, the driver can brake himself if he has been paying attention.

Can ACC bring the car to a complete stop?

It depends. Some ACC systems can follow a car until that car comes to a complete stop. ACC needs help from other systems to be able to do this. For instance, the brakes must be able to hold a vehicle still for a period of time.

If it can’t come to a complete stop, it will provide a warning and then disengage.

After stopping, the car will go again by simply pressing a button or the gas pedal.

Some systems can recognize stationary cars (like at a traffic light) and try to stop behind them. I say, “try,” because depending on how far it detects the car and how hard it can brake, it may have enough room to stop without hitting the stationary car. It’s physics, and the answer is left as homework for the student.

Can ACC be used with a manual transmission car?

Sure, why not. The driver will have to change gears as ACC manages the vehicle’s speed, and it can’t generally can’t follow a vehicle to a full stop.

So with ACC I don’t have to pay attention and can read while driving, right?

Let me figuratively, metaphorically, and literally slap you now.

Are there circumstances where or when I can’t use ACC?

The owner’s manual will let you know the appropriate conditions where you can use ACC. That’s the first place to check, as each manufacturer’s system is slightly different.

As a general rule, I would say use it wherever you would normally use conventional cruise, and avoid using it in inclement weather.

I know this is crazy talk, but use your common sense.

Is this a safety feature?

That’s all that the lawyers in the back of my car will let me say.

BAH! Why do we need these driver aids to drive our cars?

We don’t. Neither do we need antilock brake system, stability control, launch control, airbags, seatbelts, or even mirrors. These just detract from driving experience.

And we’re all fantastic drivers, too, never making mistakes.

“The first rule of Italian driving: What’s behind me is not important.”
—Franco (Raul Julia)

So why should I buy this with my next car?

You mean besides keeping me employed? And because high tech components like 77 GHz radar is involved?

ACC takes some of the stress from driving away. Turn it on in busy rush hour traffic and let it handle the ebb and flow of your commute.

It’s really close to being completely autonomous in stop-and-go traffic, if it’s not already there.

I’m a picky driver. I almost never use conventional cruise control. But I whenever I’m in a car with ACC, I use it as much as possible, even in conditions it wasn’t designed for (shhhh… don’t tell the lawyers). It’s just more convenient, more relaxing, more comfortable for me.

Finally, we have to get used to letting our Technological Overlords drive us around. The current design for the Google car has a top speed of 25 mph. We have to get better than that. This is part of the technology that will get us there.

What cars have ACC?

As I started putting a list together, I realized that it was going to be a long list. Let’s just say many cars that start with a base price of $30,000 will probably have it. Sports cars, like the Chevrolet Corvette, probably won’t.