(First, a BIG thanks to Mike O. for letting me have his ticket for the Porsche event held prior to the start of the auto show!)

“And there’s a hand, my trusty fiere! and gie’s a hand o’ thine!
And we’ll tak’ a right gude-willie waught, for auld lang syne.”
—Robert Burns

This year’s auto show was a little special—I had a chance to brainwash my 5-year-old son into thinking cars are cool. While he likes cars, he actually likes food better (where did I go wrong?!). He was more interested in the fudge, pretzel, and candied-almond stands than the cars.

Kids these days apparently don’t like cars and driving. I have work to do.

Sure, I’m biased toward Porsche. So what—they’re nice cars. The Carmine Red GTS versions were especially sweet this year. 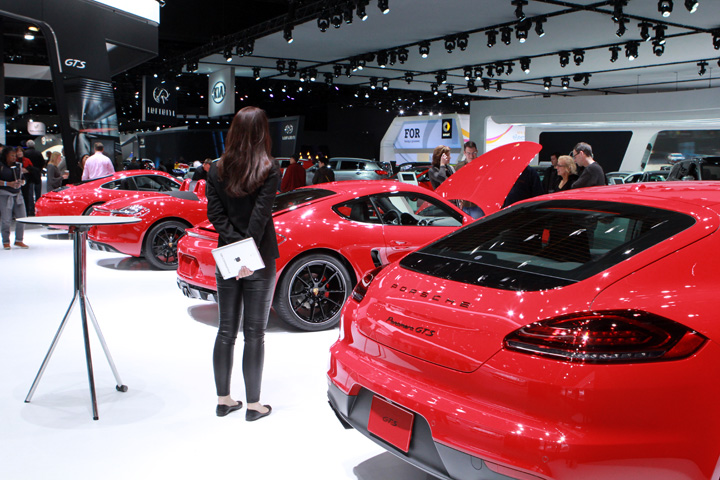 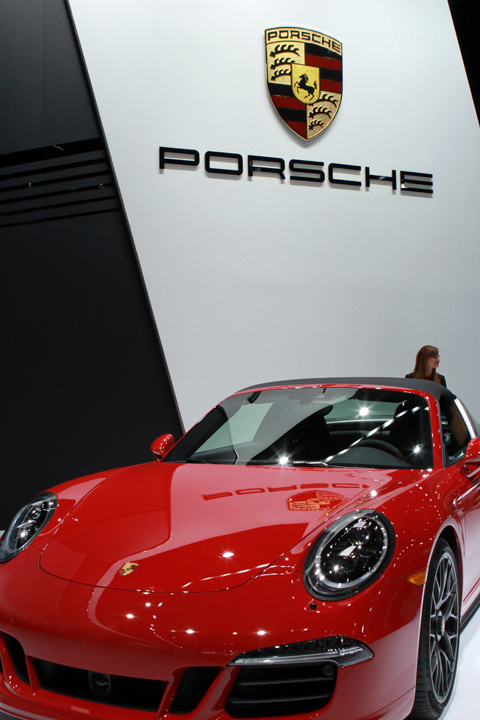 Porsche introduced the 911 Targa 4 GTS, an all-wheel drive model.
That means topless in summer or winter.

Porsche is also going green, literally. They created a nice effect with their badges for their hybrid cars, putting a green badge underneath the chrome one. It makes it look like it’s glowing green. And green Brembo calipers are the new carbon-ceramic… actually, no, they’re not. 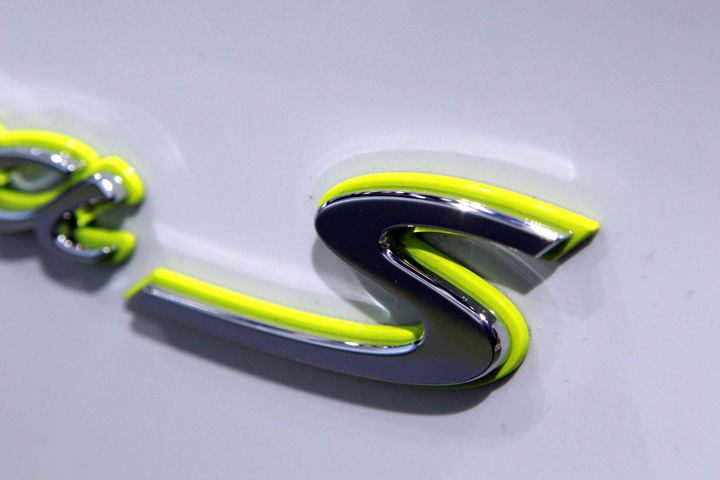 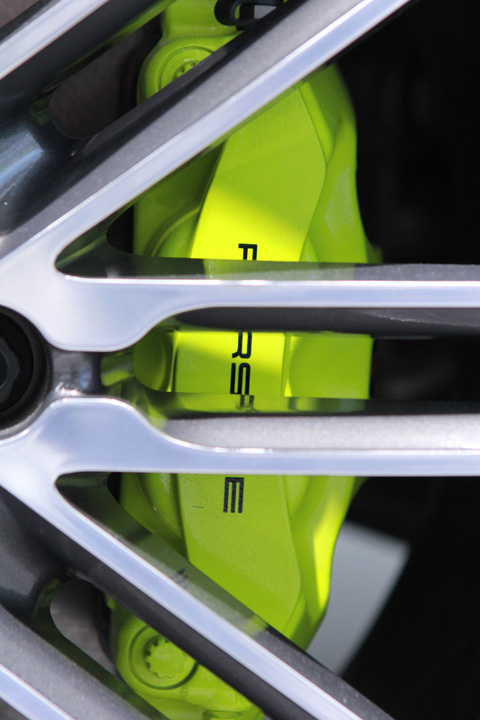 So does this make Mountain Dew environmentally correct?

The Ford GT was big news this year, as it came as a surprise for many (like me). And through Autoweek, I learned what a “flying buttress” is. It wasn’t at all what I originally thought it was.

My favorite feature of the car (other than a 600 hp, twin turbo motor) is the rocket taillights. 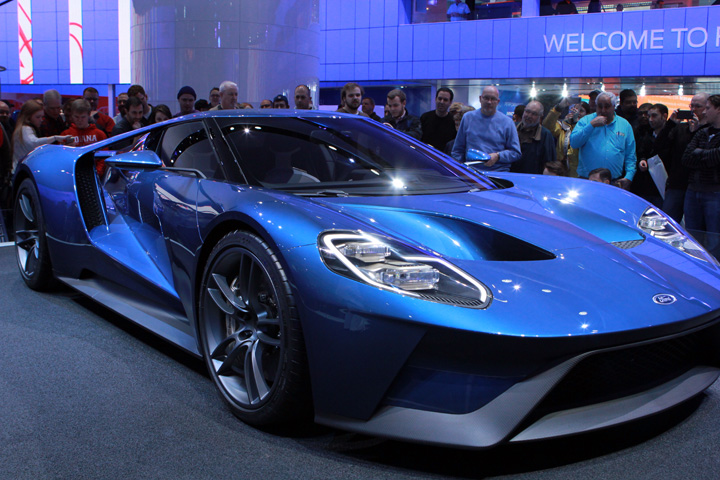 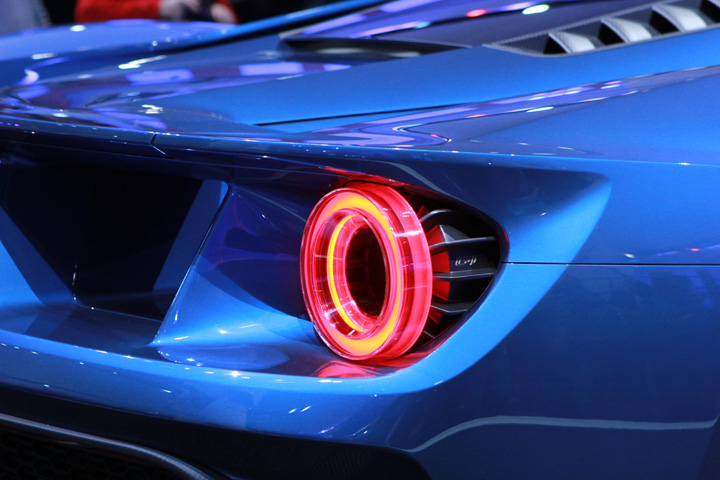 The red rocket lights go well with the Liquid Blue.

Ford also had the Ford GT’s dad and grandfather there. The family resemblance is pretty strong. 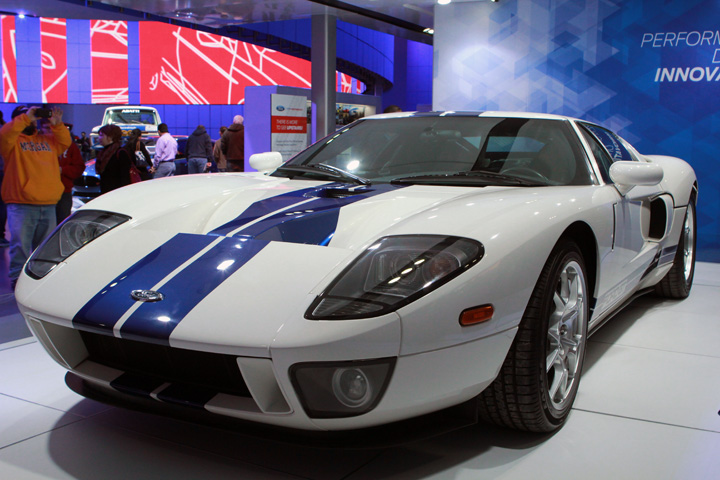 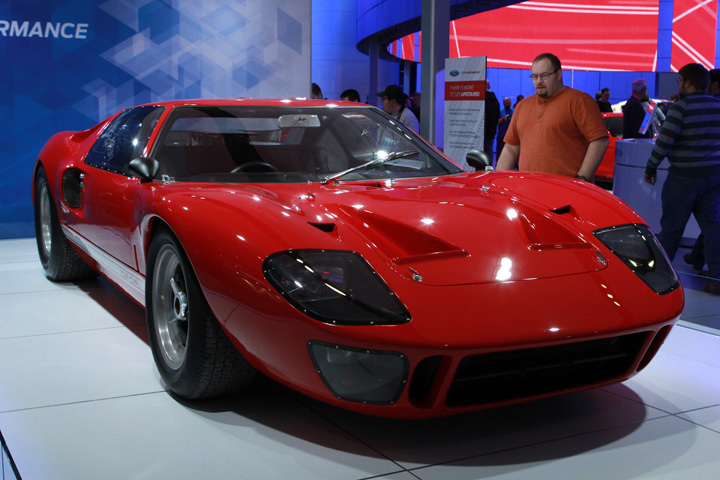 Red, white, and blue: still crazy (fast) after all these years.

Special mention goes to Jaguar this year for Saving the Manual! They put a 6-speed in this convertible F-Type. Maybe I will get one of these for my wife. If I had any money, that is. Santa is definitely putting Jaguar on the “Good List” this year. 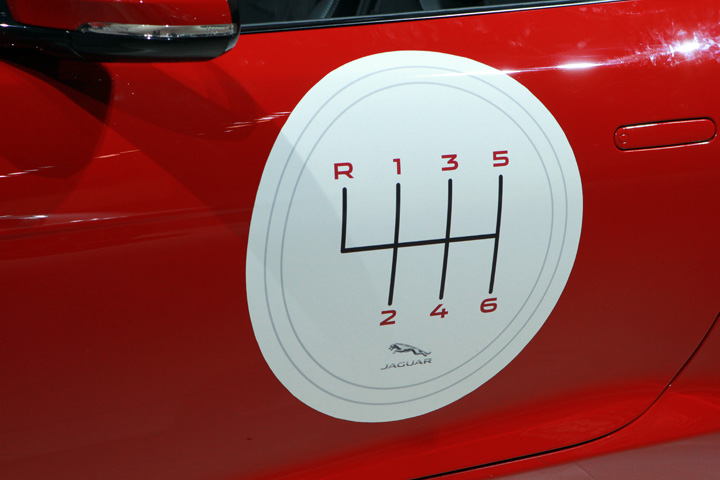 Please help a gear head and donate to the Cranky Driver Charity today.

One of my favorite cars of all time is the original Acura NSX. When it was introduced, McLaren-Honda was on top of Formula One, and Ayrton Senna was the Greatest Driver in the World. Honda got input from Senna during the development of the original NSX.

Like the original, the new NSX has a mid-engine V6, but it also adds turbochargers, all-wheel drive, and electric motors. The gas engine is estimated to be about 500 hp, and the price is around $150,000. It will probably be fun to drive. 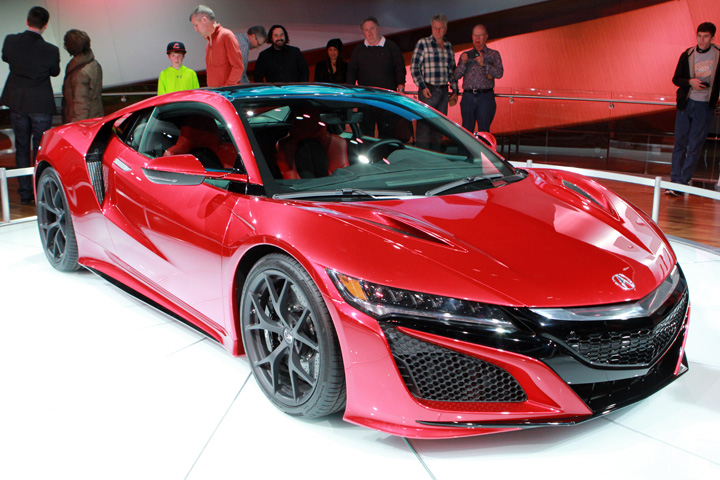 What would Ayrton Senna do with his magic loafers when driving this 9-speed DCT car?

I’m not what I consider a Corvette person, but I would not kick a Corvette out of my garage for leaving crumbs on its leather seats. And if it was a topless Corvette Z06? Well, let’s just say I wouldn’t care what shade of gray it came in. In this case, it’s Blade Silver Metallic. Sure it only has 650 hp, but it’s probably the best $79,000 you could spend on a car. 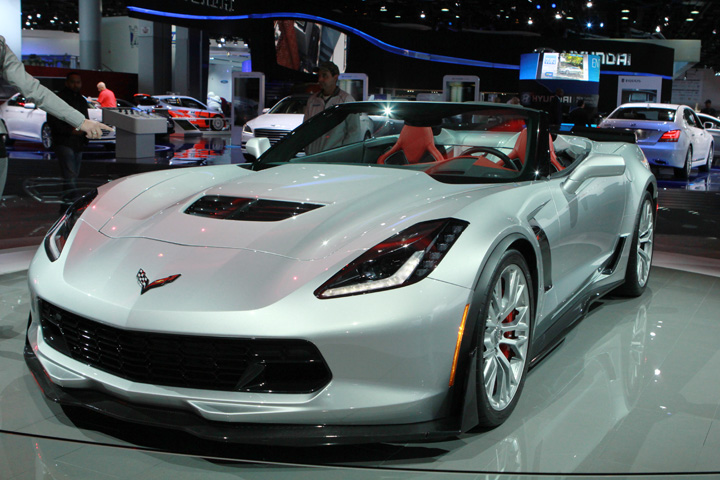 I like big brakes and I can not lie,
you other drivers can’t deny…

Anything with turbochargers tend to get me excited, and this 450+ hp Cadillac ATS-V is no exception, especially since it comes with a manual transmission. I’m going to keep an eye out for this car once 1- and 2-year lease vehicles start coming to market. 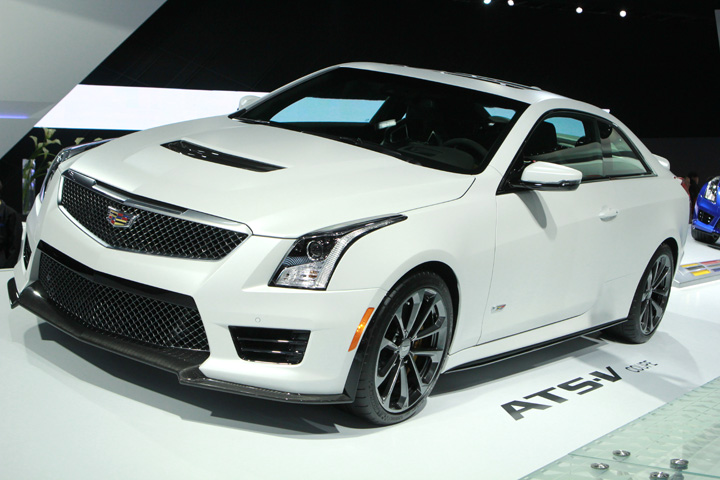 I would actually get the 4-door version, but I was too lazy to walk over to the version.

I like this light weight concept’s flag in the back, even though I thought flag on the back of pants was a 1990s thing. 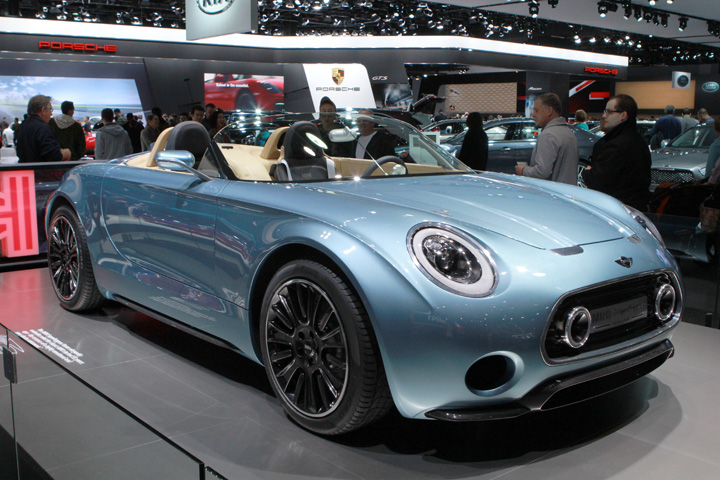 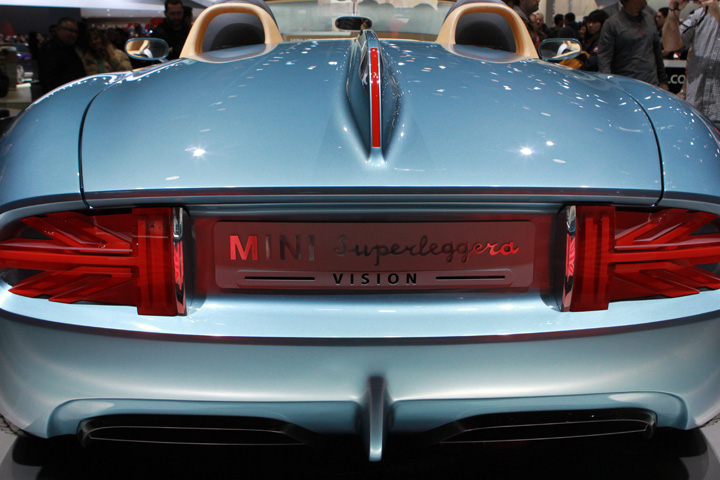 Do not try driving this through Italian sewers—there’s not much room for gold bars.

The winner of the “Most Likely to Be Mistaken for the Batmobile” award goes to the Toyota FT1. I know I had pictures of it from last year, but it’s so outrageous that I really want to see this on the road. 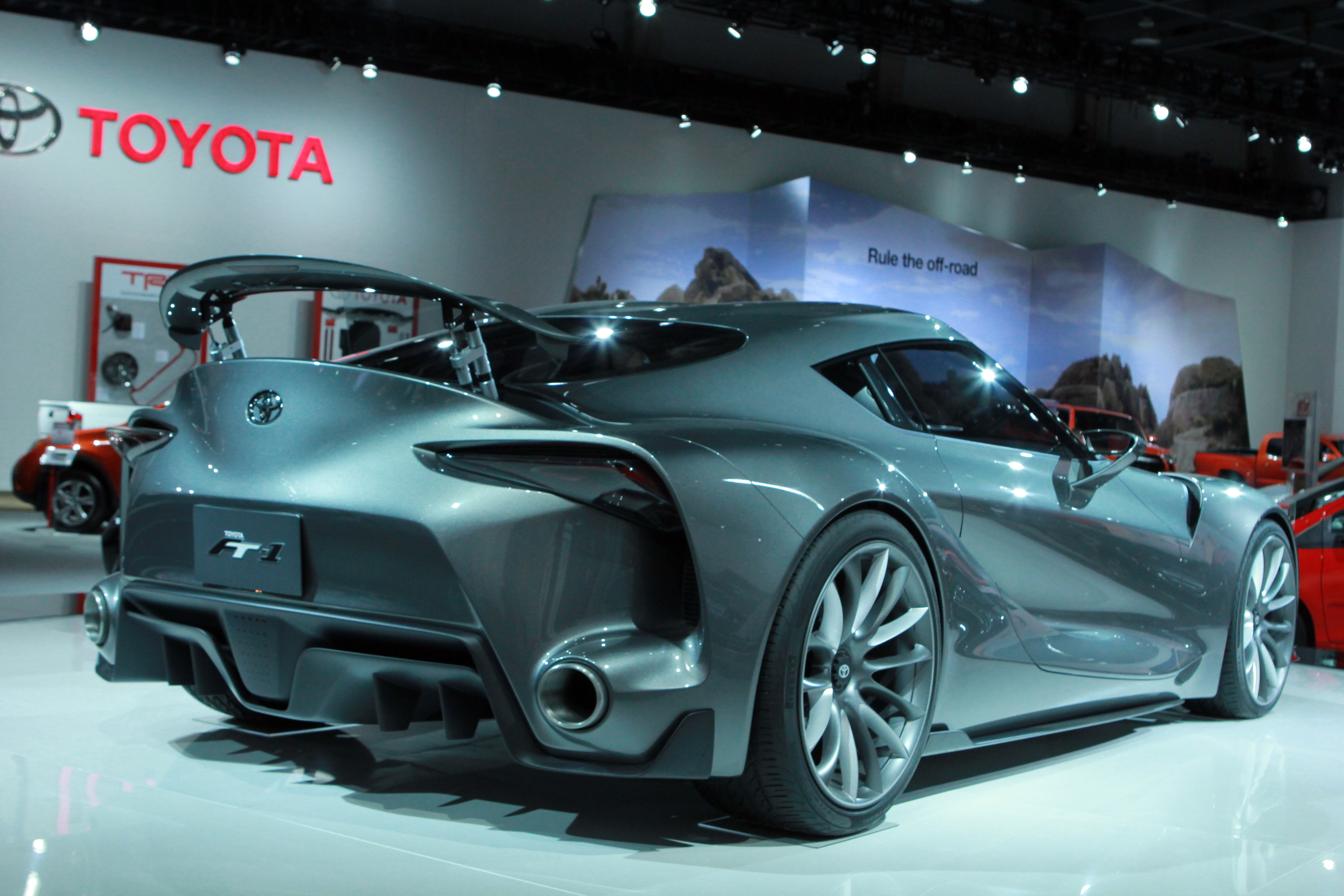 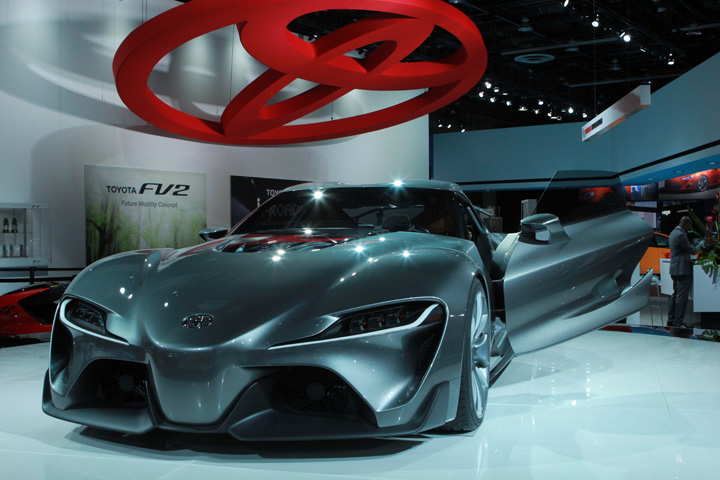 Dieses Auto has the highest probability of being the next car in my household. All-wheel drive, 292 hp, four doors, manual transmission, and a hatchback—it ticks off every major feature I want. Well, I’m also looking for “free,” but manufacturers don’t make those anymore. The base price for the Golf R is $36,595 ($39,090 for DSG models).

It’s just a question of if I will be driving it, or my wife. I’m kinda hoping it’ll be me. I’m not sure if this Golf R can hold a bag of clubs in the back without folding the seats down.

I’m so old I forgot to walk by what is currently my favorite car of all time, the Alfa Romeo 4C. Well, I guess I’ll have to go back to the show one day to get a picture of it.

Of course I’m going to have a picture of Subaru WRX STI here. I have one every year. 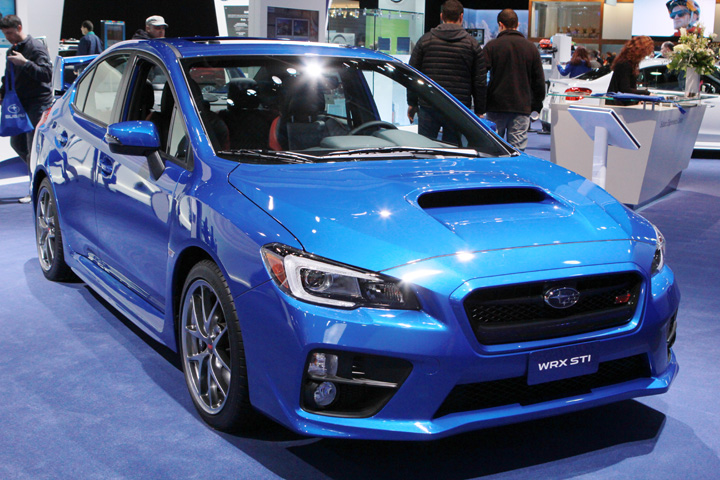 I keep clicking my heels and wishing for a hatchback, but so far no dice.

Local Motors was creating a car live at the auto show. They were making 3D prints of vehicle parts and assembling it. My guess is they were procrastinating like I do and didn’t have the car ready for the show, so they came up with the “let’s pretend we want to build it during the show” plan. 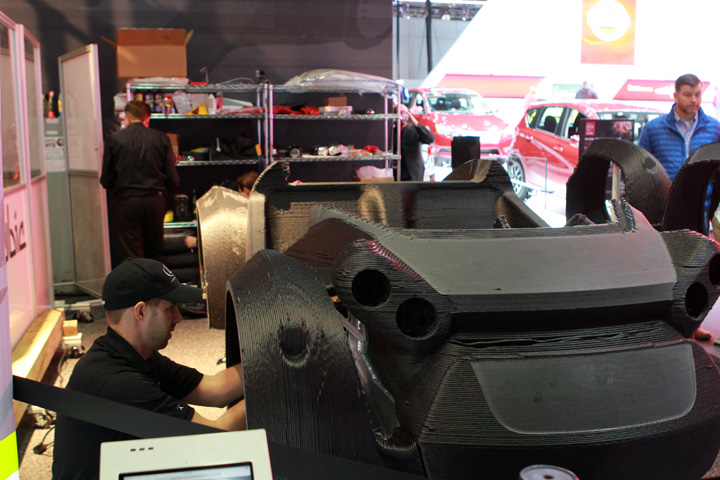 It’s going to take a lot of buffing to get this as shiny as the other cars.

So you have a car with the gull-wing doors of a Delorean, but you can’t enjoy driving it because of pet separation anxiety. Well, your troubles are over. Thanks to the GAC Group, you can now bring your fish with you when you travel. You can even rotate you seat to keep a close eye on them.

I hope I’m not mistaken and this is really for keeping your sushi fresh.

The last 3 Detroit auto shows I’ve gone to have been pretty well attended. That’s good to see. Maybe people like cars again. Or there was nothing on TV this weekend. 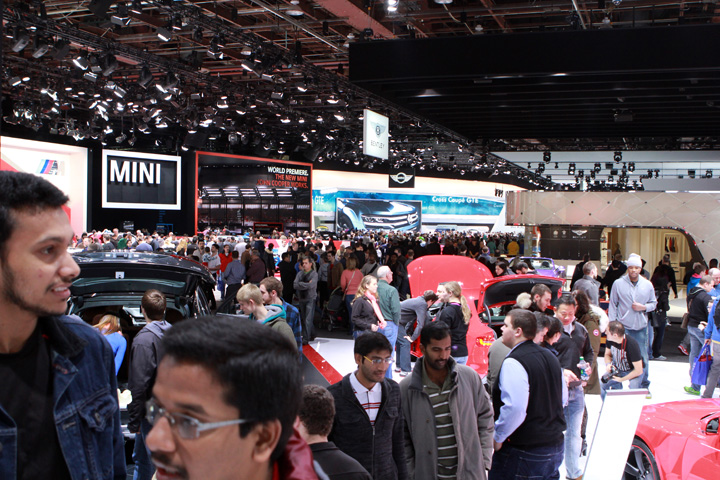 And this is just the line to the bathroom.

Crankiness Rating: 1 out of 11 (Just enjoying my son’s pre-therapy years.)