I’ve had many flimsy excuses over the years as to why I’ve had a writing hiatus on this blog. Typical ones include being lazy, tired, or stressed. My new excuse is dieting, which makes me lazy, tired, and stressed.

Now, I’ve been a professional dieter since 2007, when I started running a yearly diet contest at work. I have two personal goals for “dieting:”

It’s debatable which is more important for me.

Giving up smoking is the easiest thing in the world. I know because I’ve done it thousands of times.
—Mark Twain (attributed)

The biggest culprit for my weight gain is typically work. Lots of stressful, late-night hours at work sitting next to the vending machines lead to Cheetohs-induced weight gain with a Mountain Dew chaser. Also, I give myself less time for exercise, although this would help with the stress.

I’ve started a new position this year that is significantly less stressful, but comes with a lot of free donuts. Or as Homer would say, “D’oh – nuts!” 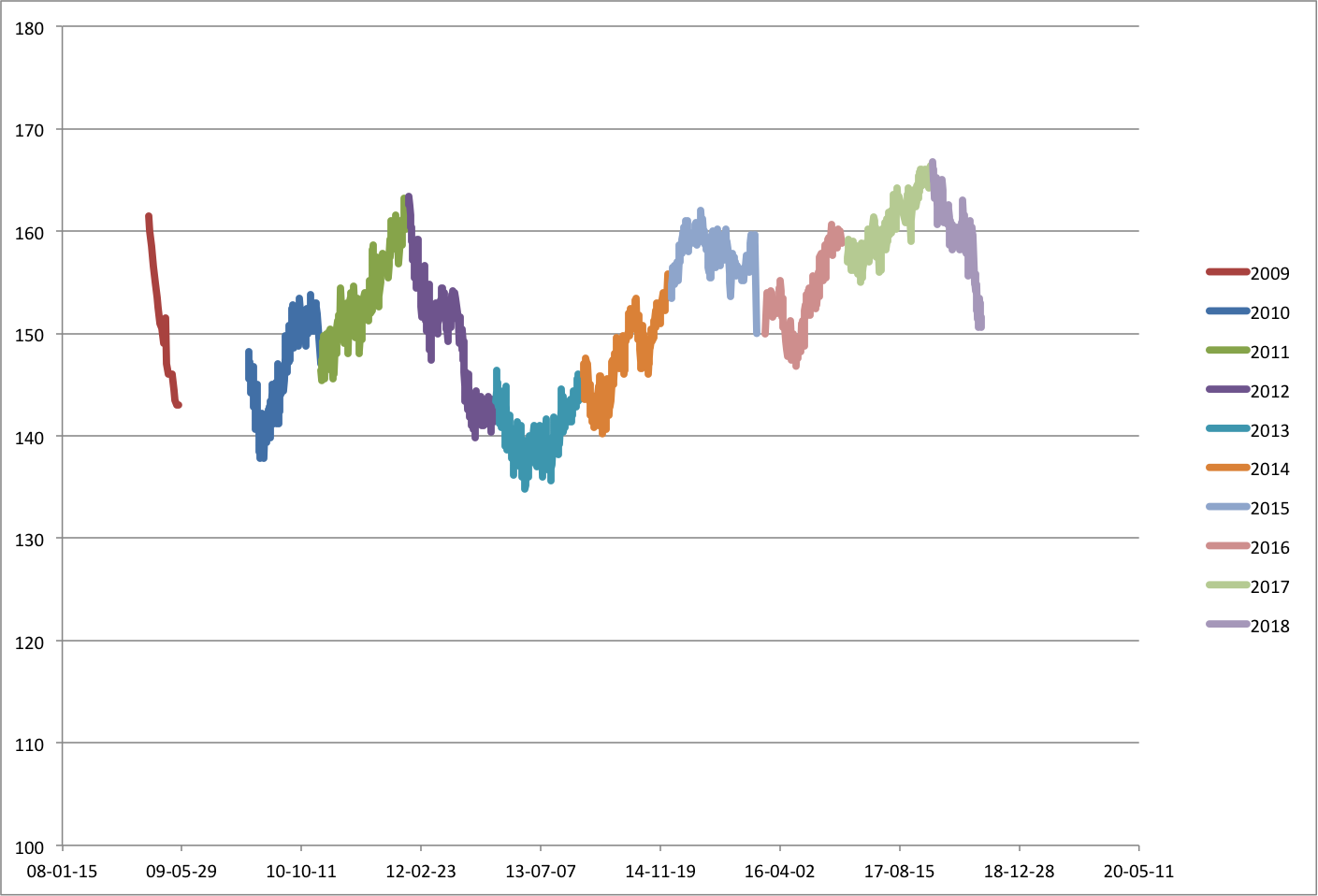 Of course I have an Excel chart of my weight over the last few years. It does not capture when I used to be over 170 lb. This would be more accurate if instead of years, the x-axis read: GM Program #1, Demo Cars not Working, Bavarian cooking, etc. Downward slopes at the start of the year indicate diet contests.

Weight, it seems, follows the gas-pump price rule—goes up easily, takes forever to come down. I started my current diet cycle back on January 1 of this year and have had mixed results (see: donuts). I’ve recently become temporarily single as the rest of my family vacation in Germany for a few weeks. I decided to dedicate myself to really losing weight during this time when no one has food waiting for me when I get home. So after 4 weeks of working out 6 times a week for about an hour (run/bike) and eating rabbit food without salad dressing, I’ve lost a total of 2.8 lb, which frankly defies physics.

That is, until I remember the tubs of kids-free (though not guilt-free) Sea Salt Caramel Truffle ice cream in my freezer that I’ve had almost every night. Also, donuts.

But my point is getting up at 4 am to go to the gym and eating an apple a day for lunch hasn’t given me much time or energy to write. (That’s my story and I’m sticking to it.)

(Big aside: studies [#2, #3] have shown that exercising typically doesn’t lead to weight loss because people compensate. 2I, for one, compensate all the time for all kinds of things. For example, if you walk 30 minutes at 150-200 calories, treating yourself to a 450 calorie Frappuccino or a 300+ calorie banana muffin is a net gain of calories.)

My weight gain could be an allegory to the sports car world. Just as my clothes have mysteriously shrunk over the years, cars have gained weight. The weight gain has been from regulations to added features such as radar sensors, more airbags, Blu-ray players, and engine noise speakers that are in our new vehicles.

Cars have also gotten larger over the years, presumably so we can still fit in them as we’ve gotten bigger ourselves. The wheelbase of the current Honda Civic sedan is 106 inches, the same as the first generation Ford Taurus. The original Civic had a wheelbase of 86 inches and weighed 1,500 lb.

Mike Flewitt, the CEO of McLaren Automotive, recently gave a talk where he challenged British engineers to a “weight race” instead of a horsepower race. This was the philosophy used in the McLaren Senna, a 2,640 lb carbon fiber missile that you can also drive on the road.

A designer with a McLaren connection, Gordon Murray, is also anti-flab. He was obsessive with paring weight from the McLaren F1, the first production car to use a carbon fiber monocoque chassis. He’s at it again with his new project, a sports car that will be lighter than a Miata.

It’s unfortunate that I can’t replace my flabby bits with carbon fiber (yet), nor is carbon fiber cheap enough for mass-produced vehicles. However, my unremarkly-built 2000 Honda Civic Si also weighs around 2,600 lb, though its inline 4-cylinder falls a little short of the Senna’s 789 hp V8. The Civic eschews frivolous items like anti-lock brakes and uses a battery that’s only slightly bigger than my portable iPhone charger to keep its weight down.

The first generation 270 hp Acura NSX was introduced in 1991 (U.S.). It weighed about 3,000 lb due to its heavy use of aluminum body panels. When the third generation 252 hp Mazda RX-7 was introduced a couple of years later, it was lighter at around 2,800 lb using standard steel panels.

So it seems possible to built light cars without having to resort to exotic designs.

As I look at my list of favorite cars, most tend to be low-weight cars, intentional or not.

Note: I didn’t always pick the year with the highest horsepower output for these models, so the weight-to-power ratio could be even better on some. 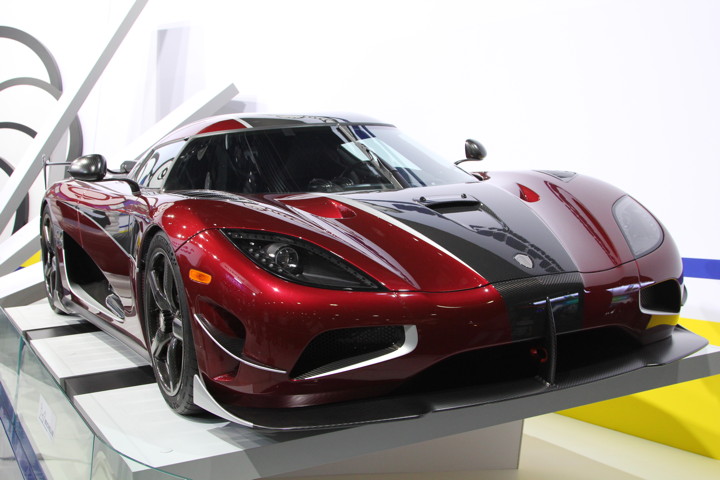 The Koenigsegg Agera has so much carbon fiber that it will lighten your wallet as well.

I even like the any model from Porsche with a Speedster label, because Porsche is one of a few companies that can charge you more money for removing stuff from your car.

My weight over the last 15 years has fluctuated almost 40 lb, which is a lot for a small person like myself. When my weight is in the lower part of my range, I can do things, like jump over a phone book (which luckily are much thinner now), or not hurt myself as much when I walk up stairs or fall out of bed. I hesitate to use the word “nimble,” but I can usually get out of my car with using the “oh, shit!” handle.

Similarly, I expect lighter cars to be more agile, which is what I want when driving down that twisty back road. There’s a balance between adding a bigger engine (and its additional weight) to a car and its handling characteristics. The Dodge Challenger SRT Demon is one of the greatest horsepower deals of our time. It generates 808 hp on premium gas, and 840 hp on 100-octane race gas, all for $85,000. It also weighs over 4,200 lb, which is at least less than an M1 Abrams (60 tons). Neither would be my first choice for a back-road tour3For back woods, the M1 gets the nod..

I would be quite happy with a “mere” 181 hp if it came inside a Mazda MX-5 Miata, for example.

I once read on the internet that 10 lb is equivalent to 1 hp (or some ratio like that), probably from the same source that states that every 5 stickers on your car makes it a tenth of a second faster per lap. I certainly seem (in my mind) faster when I shed the weight of a driving instructor when I’m on the track.

Losing weight on your car can even be fun, like when you tick that carbon ceramic brake option on your order sheet, or get that aftermarket titanium exhaust that’s 10 lb lighter than stock. Well, expensive fun.

But if that’s a little too rich for your taste, then, like myself, you can try foregoing that Cheesecake Factory Chocolate Tower Truffle Cake instead as an alternative weight reduction of sprung mass in your car. Your seat-of-the-pants dynamometer (and the seat of your pants) will thank you for it.

It must be bad when you look forward to having salad dressing again.