You can play this game anywhere, although probably not for fun or profit. Even though I don’t like stereotypes, it helps in this game. Casual random conversation is also helpful, but full Google-like stalking is just cheating.

“All the people like us are We, and everyone else is They.”
—Rudyard Kipling

I play this game at the gym in the morning. The older, really fit gentleman with regular work gloves for weight lifting, and works outside a lot? An older Ford F150. The well-groomed guy with the matching sweats, but never gets too sweaty? The Audi A6. The housewife trying to get her pre-third kid figure back? A Chrysler minivan.

In my house, what does the female, granola crunching, tree-hugging, European liberal teacher who lives too close to Ann Arbor drive? A Subaru Legacy GT station wagon (with a manual transmission). And the male, testosterone-fueled, Tanner Foust wannabe, but more like a Ken “Crash” Block driver? A Subaru Impreza WRX STI (with a manual transmission). These, by the way, are the only two demographics for Subaru.

Once in a while there’ll be some fascinating surprises. The small, blond female engineer at work? A Camaro SS for painting twin black lines in the parking lot and a Kawasaki Ninja for passing people on the I-75 on-ramps.

Or the elderly gentleman I was chatting with at a Subaru dealership. His car was a souped up (!!) Corvette Z06 (this was before the current Corvette ZR1 came out), and a souped up STI in the sho.

Sometimes you can work this process the other way. Someone in the gym mentioned that he was getting his race car together. He didn’t mention what kind of racing he does, but he drives a Chevrolet Malibu. I have no idea what kind of race car he has, but I would guess he races either short ovals or drag races based on his Malibu. Because if he did road racing, he’d be driving a Mazda Miata. 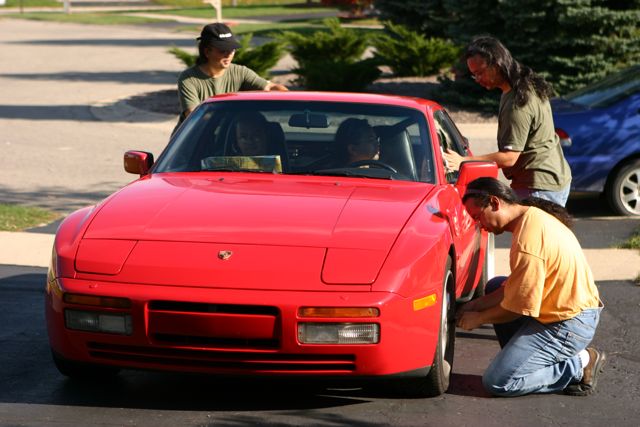 One of me must be compensating for something with this Porsche

Obviously this game has its pitfalls. If a total stranger comes up to me and gives me his life story and psychological profile, I will not know what car he drives. But if also given a short, multiple choice list of possibilities, I think I have a good shot at guessing which is his car in the parking lot.

Try it at the next party (it’s a lot easier than getting skinny teens to fight to the death for food).

As you walk in, try to guess who drives the Hummer H2 with the dubs (which may or may not have spinners). It’s probably not going to be the grandmotherly 60-year-old high school English teacher. Hint: look for gold jewelry and a Rolex. (If it’s an H1, look for brawny Austrians.)

“All this talk about equality. The only thing people really have in common is that they are all going to die.”
—Bob Dylan

(Well, Bob, that’s kind of a downer. Let’s end it with this other quote instead.)

“I am free of all prejudices. I hate every one equally.”
—W. C. Fields

We were paying for lunch at Tom’s Diner (no relation). I looked out the window and saw a bright red fifth-generation hard-top Corvette backed into a parking spot off to the side. A few of the booths in the diner were occupied by families with young children. A couple more have some high school kids finished with their classes. A pair of Oakland sheriff regulars are talking with the wait staff. In the corner is a pair of rough-and-tumble construction looking guys. Another pair of guys are wearing untucked flannel shirts and ripped jeans. One table has three 20-somethings, two women and a man. At the counter is a 40-something man wearing a tie, and a 60-something man who looks sadly lost.

The parking lot has a couple of minivans and Jeeps. There’s a pickup truck, an Oakland county sheriff’s patrol car, and a work van of some sort (couldn’t read the sign on it). On either side of my Subaru is a Ford Taurus and an old Tahoe. The rest of the cars were as interesting as the asphalt they were parked on.