All drivers do stupid things. This includes you and me. At some point in time while driving, we will be distracted or not paying attention in some way.

So I was pleasantly surprised when Eddie Alterman, Car and Driver’s editor-in-chief, wrote about his dinner with Dr. Ralf Cramer and Samir Salman of Continental Automotive. They told Mr. Alterman about Continental’s goal to put advanced driver assistance products, such as adaptive cruise control, blind spot monitoring, and lane departure warning, in as many vehicles and as inexpensively as possible.

My full disclosure here is that I not only work for the men and company mentioned above, but on the products they are trying to sell. And it’s no revelation to say that the more of these products we sell, the more toys I’ll buy longer I get to bring food home to my family.

I work with these products every day, and I would definitely want them for myself and my family. It’s an added safety net for driving. And the more people have them, the safer driving becomes.

One of the products I would personally like to see adopted more is a collision mitigation system. This will autonomously brake the vehicle if a collision is imminent and the driver has not applied the brakes. It can also provide higher braking levels if the driver has not pressed hard enough on the brake to stop (a more common situation than you may imagine).

Picture yourself in stop and go traffic. You’re inching along with everyone else while you stare at the icons of your radio’s touch screen display. The car in front of you has stopped, but you’re still fighting with your radio, which insist you want to listen to Kenny G while you swear you didn’t even know you had any Kenny G on you iPod.

The BANG! you hear next over the sweet sounds of Kenny G is your deductible going out the window.

Or, in an alternate reality, a radar sensor would detect the car stopping in front of you in less than a blink of an eye, and applies the correct amount of braking to stop you as close as possible to the car ahead of you, maximizing the braking distance of the vehicle behind you. Kenny G is safe.

“The best car safety device is a rear-view mirror with a cop in it.”
–Dudley Moore

What was not so surprising were the comments like this from Marc Mitchell:

“Seatbelts, yes; airbags, sure; but all these techno-nannies (from which the aforementioned gents will surely reap monetary rewards by the forced addition of them) will make the roads more dangerous by reducing the necessary driver involvement.”

This is a common response to any driver aid in a vehicle. I remember this when ABS (anti-lock braking system) was being introduced. I’m sure it was said when the first steering wheel was proposed (“All I need is my tiller! This new-fangled steering wheel will just make people lazy drivers! You kids get off my lawn!”).

And just to be clear, automotive companies like Continental do try to make money whenever something is mandated, like airbags. It is a business after all.

Mr. Mitchell needs to realize there should be less driver involvement. Bad drivers are not going away. I know Mr. Mitchell can’t respond to me, but who cares— he’s bragging about his CTS-V in the snow, a car that has stability and traction control— better known as techno-nannies.

Mr. Mitchell asks, “How many traffic deaths would have been prevented by the addition of blind-spot warning to your Pinto?” This is a valid question. The answer would be very few.

Isn’t it a better goal to prevent accidents in the first place?

The FAA has a goal of zero accidents. Obviously they don’t meet that, but they try. Why can’t we have the same goal for traffic accidents?

By definition, an accident occurs when someone did something they weren’t supposed to do. This could be anything from not paying attention to not doing what you’re supposed to be doing. Like when drivers talk on the phone, or go faster than conditions warrant.

It could be argued that machines and computers break down and make mistakes. I will agree on the first part, since nothing is perfect, and dispute the second part. Computers just do what they are told, in general it is their programmers that make mistakes. This doesn’t mitigate something going wrong, of course. I’m just saying it’s probably not the computer’s fault.

Computers and machines aren’t infallible, but the real question is: are they better than humans? In cases where good judgement and reasonable thinking aren’t required, I would take a computer over my fellow man. Actually, how many people do you know exercise good judgement and reasonable thinking, especially behind the wheel of a speeding vehicle?

A computer can calculate how much time it takes until you hit that object in front of you until the cows come home. It can calculate if you are drifting outside your lane dozens of times before you even realize what’s happening. That’s what it does best.

Some of the sensors used by advanced driver assistance products are even better than human senses. There are radars that can detect objects in the fog, and infrared sensors that can see in the dark.

Let’s look at a couple more arguments against driver aids:

“I’m a fantastic driver who pays attention all the time. I don’t need these driver aids.”

Then shut them off. Most driver aids can be turned off.

“Driver aids will add unnecessary costs to the vehicle.”

Is it unnecessary if it prevents an accident? Preventing accidents may be difficult to quantify, but the point of the original article is to also make the products more inexpensive.

To make Mr. Mitchell’s Rhetorical Pinto GT safer, maybe he would prefer putting a sharp spike on the steering wheel pointed at the driver. That would certainly make the driver “necessarily more involved.”

So to Mr. Mitchell I say: we should have more techno-nannies. We need as many as possible in the car, to the point where most morons don’t have to drive. I would like to see fewer of my fellow man behind the wheel of a 3000-plus pound car. I don’t think they should even be on a bicycle.

In an ideal world, drivers would be trained better and avoid accidents, but we don’t all live in Utopia, FL. 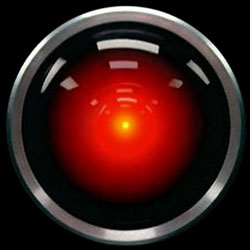 I would rather have a DARPA-inspired, self-guided Skynet Hal 9000 vehicle take these people to work, school, or Walmart. They don’t want to be driving anyways. Robot vehicles will know the rules of the road. They’ll stay out of the left lane except to pass; they won’t run red lights; they won’t tailgate. And you won’t have to worry about road rage with them. Until they evolve, of course.

Like I said, computers aren’t perfect. But they are still better than that guy on the phone wearing a backwards baseball cap, drinking a large Slurpee, drifting into your lane.

“Two things are infinite: the universe and human stupidity; and I’m not sure about the universe.”
–Albert Einstein

What Comes after Two Days of Rain in Michigan?