So there I was, stopped at the traffic light that had just turned red. I looked in my driver side mirror and saw a car still speeding towards the light. He eventually slammed on the brakes, and stopped partway into the intersection. As I looked over, I saw that he had a phone to his right ear. Typical, I thought.

After the light turned green, I ended up behind him to go around another car, and then I noticed that there was smoke coming out of the cell phone guy’s window. Amazing—he had a cell phone in one hand, and a cigarette in the other. And of course, after a couple more puffs, he threw the cigarette out the window (pet peeve #4).

What I couldn’t tell is if he scored a trifecta by also reading a book or newspaper. Perhaps he may have had a laptop steering wheel desk, very handy for business people on the go. Who needs to text while driving when you can send e-mail? 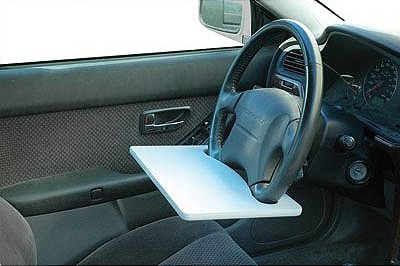 “You can always find a distraction if you’re looking for one.”
–Tom Kite

Unfortunately, wishing that this guy be Darwinized may be a case of calling the kettle black. When I think of all the things that I allow to distract me when I’m driving, I may be as guilty as this guy. For instance, I have a bluetooth handsfree setup in my car, which is useful if you have a manual transmission car. But it’s simply the act of having a (phone) conversation that is distracting, as studies have shown.

This is why I also don’t like driving with passengers. All that yelling and screaming from the passenger seat can be very distracting. Passengers should also pray more quietly.

Back in the previous century, I used to listen to radio stations, cassettes, and CDs in my car. Those radios had nice buttons that let you navigate without taking your eyes off the road. Today, I have my entire music collection on my iPod. I control it with a touch screen radio. To change anything, I have to stare intently at the screen to press one of the icon buttons. And then I have to yell a bit as the radio decides which button it thinks I pressed, eventually requiring me to try and press more icons.

And if that’s bad, have you ever tried to select a particular song out of a list of thousands? This can be daunting, even pulled over on the side of the road.

But the worst has to be the navigation system. I know there are lawyer screens on them saying that you will DIE if you use this while moving—please press OK. For once, I think they may be right. Trying to type in an address or look for a restaurant can be hazardous if you’re driving. Some of the newer GPS devices have voice recognition, which is a step in the right direction. I would rather yell, “find me a Starbucks now!” than hit impossibly small touch screen buttons at speed. (Is it me, or is there a hint of condescension in my GPS’ voice when she says, “recalculating…” after I miss one of her directions?)

In addition to these distractors, there are still kids, food, personal grooming, and so on that can divert your attention to the task at hand—driving safely.

So for my part, I will do my best to minimize watching video podcasts during my morning drive to work.