A friend of ours was supposed to fly from Germany to see us last month. Unfortunately, she timed her flight with Eyjafjallajokull’s eruptions (I wonder how many letters Icelanderians (Icelandicians?*) get to start with in Scrabble). After her flight and her rescheduled flight were both cancelled, she set her flight date a few weeks later just to be safe. So, of course, the volcano erupted again shortly before her latest flight. We’re all hoping that flights between Europe and North America won’t be cancelled this time.

“Ladies and gentlemen, this is your captain speaking. We have a small problem. All four engines have stopped. We are doing our damnedest to get them under control. I trust you are not in too much distress.”
–Captain Eric Moody, British Airways Flight 9

Although I love airplanes, I’ve never been a big fan of air travel. I blame this on my first flight when my younger sister and I were dressed in matching blazers and pants, with red, white and blue stripes. The 1970s were better left forgotten.

At least back then, air travel was a big deal, unlike the cattle drive it’s become today. And some of the planes we fly today were still new back then. I think that flying now makes people very cranky.

I would rather just drive. To get in my car, I don’t have to wait an hour in a security line just to get (new) naughty pictures of me. I don’t have to dump liquids if the container is over 3 ounces. How can you drink Mountain Dew 3 ounces at a time? (This could be advantageous if you have to pay to use the bathroom.) And I don’t have to pay for extra carry on or check-in baggage. If it mostly fits in the car, I can take it.

Granted, it takes longer to travel by car. On a race against a flight from Indianapolis to Detroit, it took me under six hours to drive, while the flight was just over an hour. But after considering the drive to and from the airport and the waiting for the flight, it wasn’t as bad as it seems. I really lost by just about an hour, and had my choice of gourmet meals from Taco Bell and McDonalds.

Back in 2007, my family was going to California for a reunion. Somehow, I convinced my wife that I would drive our Subaru Legacy wagon to California and back, and she and our daughter would fly there and back. So I got to drive from Detroit to San Francisco in about three days (and Los Angeles to Detroit in two). I timed it so that as soon as I arrived in San Francisco, I checked into our hotel, took the shuttle to the airport, and picked up my wife and daughter.

While the flight was over five hours versus three days in the car, I think I still had the better trip, and not just because my 18-month daughter cried most of the flight to San Francisco. I like driving on I-80 and watching the miles melt away.

I like the vastness of Nebraska, the deserts of Nevada, and the mountains of California. (Okay, the paint-splattering, windshield-caking bugs of Louisiana or Florida I don’t like so much.) Watching lightning strike 1/4 mile from the road isn’t as terrifying as seeing the same event 1/4 mile from an airplane. Throwing the car through the curves in the Sierra Nevada doesn’t involve (as many) airsick bags. Even driving uphill in a loaded car in slow traffic from Los Angeles to Las Vegas with the temperature outside at 117°F still beats the little bag of pretzels they give you on flights these days. 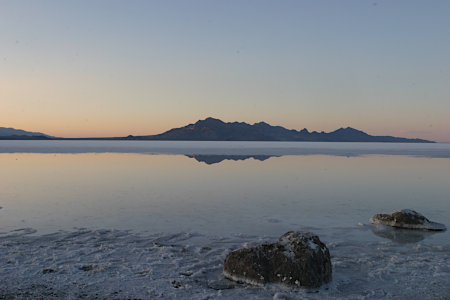 I wonder if Utahians (Utes? Utahinonians?*) have a problem with high sodium.

So when my family mentioned that there were plans to go to California again next year, my wife saw my face light up and her first words were, “I’m not flying alone with two kids!”

(Driving runs in my family, all starting from my dad. My sister mentioned she wanted to make the California drive, too, which was followed by a lot of twitching from my brother-in-law.)

This will require a lot of planning on my part. I will have to convince my wife to let me drive there again, this time with the smaller Subaru Impreza STI, while adding an extra kid. How much stuff could a little baby need? 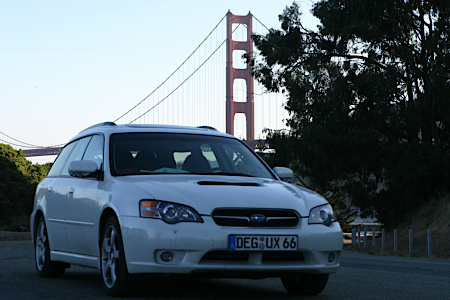 One day I’ll have to learn to take good pictures of cars.

(* Where I live, you’re either a Michiganian, a Michigander, or a Michigoose. Actually, that’s wrong. If you are in the lower peninsula, then you live under the (Mackinac) Bridge making you a troll. Otherwise, you’re one of Da Yoopers.)