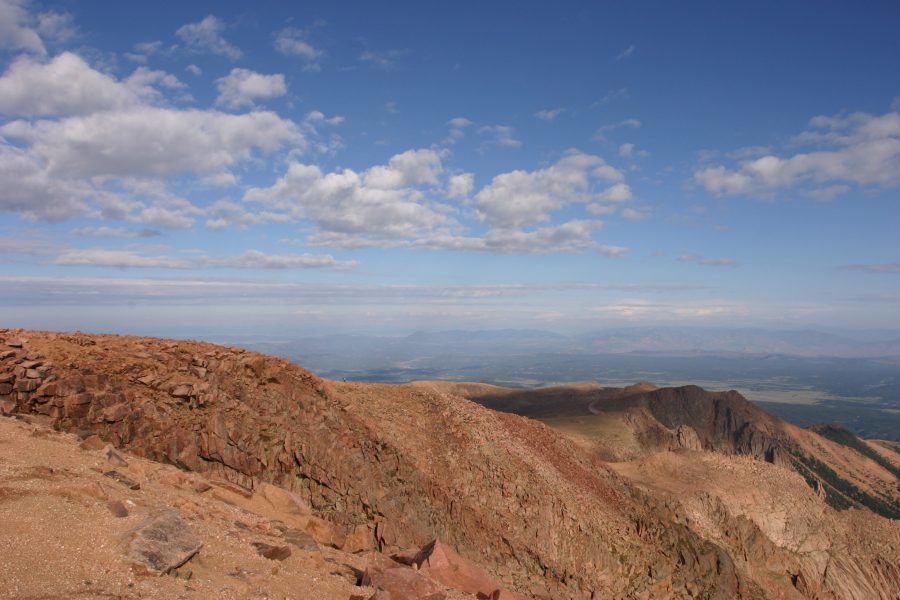 Road trips make me un-cranky. My favorite trips tend to head west from Detroit, since these avoid Ohio. They seem to have some vague justification, like family gatherings, races, and so on, but these are just McGuffins, simply to point the car in a rough direction.

What is it for this trip? I’ve decided to drive my Subaru up Pikes Peak before it’s completely paved over. At least, that’s what I told my wife.

I don’t always have the time to plan my trips how I would like to, but it’s still fun to plan. You just open up the map and start looking for places to go. You can go any where. It’s just a matter of how much time you have. Pikes Peak seemed like a good place to go. Unfortunately, I only have the time to drive to the Peak, turn around, then drive back. So even though Devil’s Tower is next door in Wyoming, it is verboten.

Stood alone on a mountain top starin’ out at the Great Divide
I could go east, I could go west, it was all up to me to decide
Just then I saw a young hawk flyin’ and my soul began to rise
And pretty soon, my heart was singin’…
–Bob Seger

One slippery slope in planning is getting equipment. I use GPS loggers to track my travels now, making geotagging photos easier. I wanted a video camera for this trip, but was reluctantly conceding to use my old DV camera. With DV tape (kids, ask an old person what “magnetic tape” is, which was still used at the turn of the century in 2000, when I bought this).

Then I started browsing Amazon and noticed this camera. Plus a 16GB microSD card. And a mount. And software to integrate GPS data into the video. And a data logger/flasher for more data. Which leads to a new ECU map to flash. Which should be checked with a wideband O2 sensor. Which is easier to install on a new downpipe. Which mates nicely with a catback— $$$$#@!*& GGGRRRRRR– Stop !!!

So where was I? Oh, yeah– on my way to Pikes Peak. I think I’ll leave tomorrow morning.

(Check back. I’ll post updates here throughout my drive.)

Crap. I’ve been up for a couple of hours now, but haven’t actually done anything today. I should pack.

The car’s 240GB iPod is loaded up with all the crappy music I like. And several audible books, including a couple from Malcolm Gladwell for inspiration. Or to realize how much I suck. The Subaru STI is cavernous compared to the Porsche 944T that I used to do this kind of thing in. I have to resist bringing too much with me. Only the essentials. I have to focus. Stay lean. But then, with the seats folded down, I could fit my bike back there.

Yup, I over packed. What started out as a quick trip to Pikes Peak for a couple of pictures is turning into an expedition up Kilimanjaro in search of Yeti. And it doesn’t even live there. Anymore.

I should leave now.

(P.S. I probably can’t go to lunch at the mall today.)

With all of the road construction going on, logically, at some point, wouldn’t at least some of the roads be better by now?

Nebraska sends out mixed messages. It has a 75 mph speed limit, but around the cities where the limit is lower, they pull a lot of people over. Nebraska, you’re very wide with just one interstate. Cut everyone a break on it. (You’re also very flat. You should think about toning to get some definition. Try the P90X® workout.) 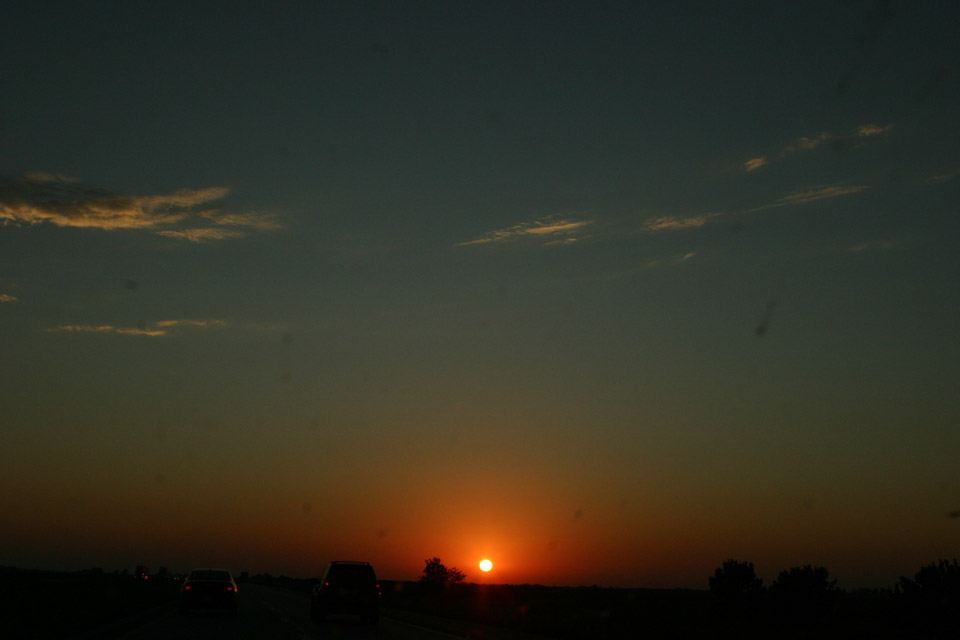 Man, I need to clean my window

I left yesterday (Wed) much later than I wanted to, so my kids were up by the time I got going. Seeing them always reminds me of one of my rules: “Don’t do anything (really) stupid today.” This might seem like a pretty simple rule, but sometimes I forget. And looking around at other people, I don’t think some know that this should even be a rule.

So with that in mind, I decided not to tailgate a trailer and take my picture in its reflection. Sure, I may have gotten away with it, but why take the chance? 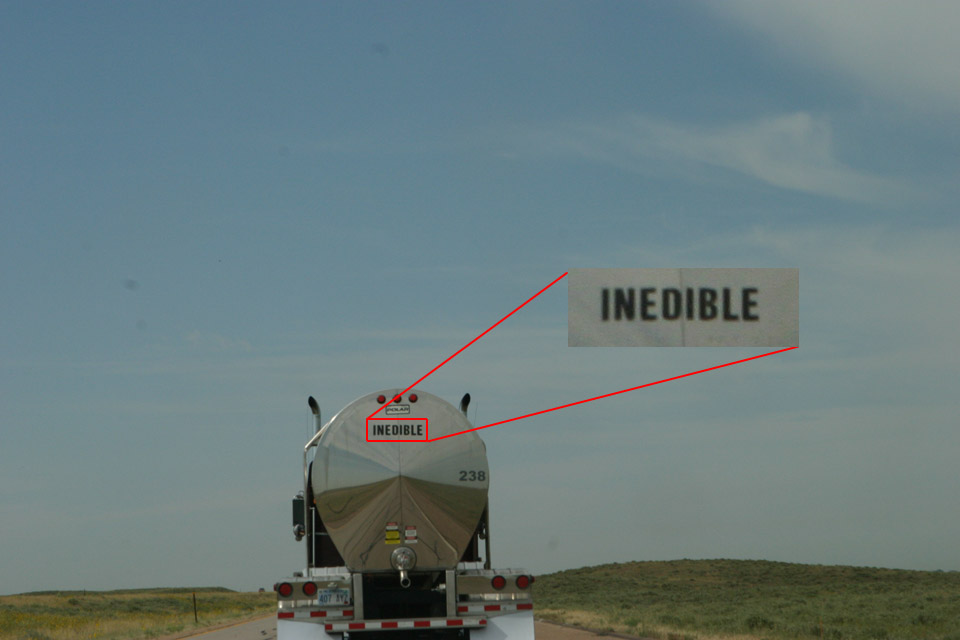 Not only should you not tailgate this truck, but you can’t eat it either

I had intended to do a gas mileage experiment today. I would drive with one tankful of gas with the windows down, and one tankful with windows up and air conditioning on, both at freeway speeds. I decided not to do it, however. With the windows rolled down at 80 mph, it got loud, which made me turn up the radio, which made my “microwave emission data collecting device” alerts useless. And it kept messing up my hair, and I didn’t want to wear a hat.

I may revisit this experiment in a few years, the next time I get my hair cut.

In case any one is interested, I’m still alive, and I’ve at least made it to my hotel. 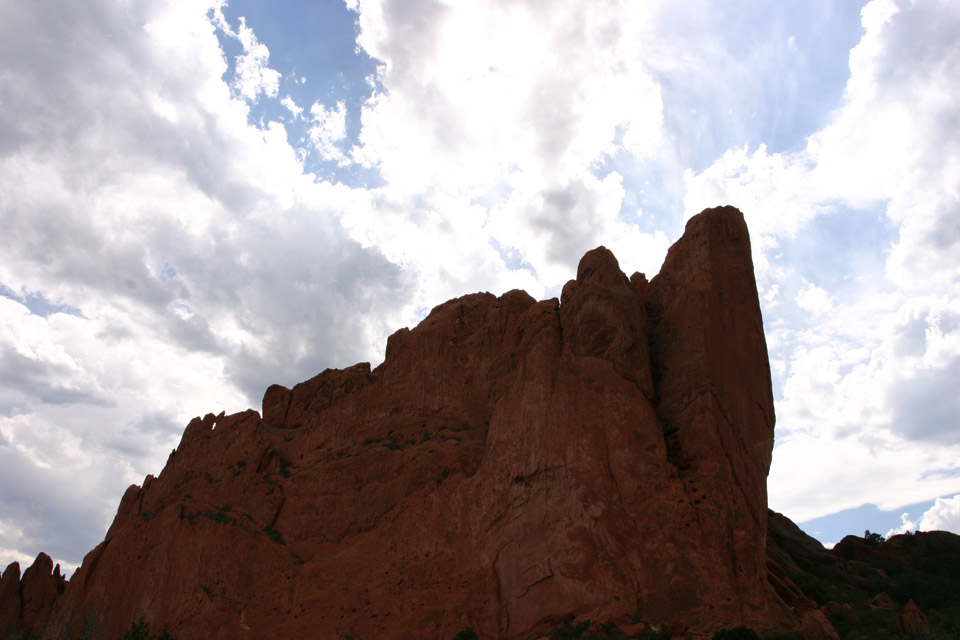 Why did they put this on the wrong side of the sun?

Well, now. That was anti-climatic.

Apparently, Pikes Peak Highway is mostly paved. There is about a one-mile stretch around mile 11 that is still dirt road, and that’s about it. Because there’s active construction going on, you can only go by with an escort, both going up and coming down through this area.

So unlike YouTube videos of the Pikes Peak hill climb race, there was no rooster tail of dust, no four-wheel drifts around 1st gear corners over a precipice, no butt-clenching moments around bends. No, I take that last bit back. It’s still pretty intimidating to drive up this road, even if it’s paved. The hill climb racers must have amazing cajones to speed up this mountain like they do. In contrast, it may be a while before I see mine again.

(*) It turns out that Pikes Peak is actually 14,115 ft. tall, according to this article. It’s been revised up from 14,110 ft. after more accurate measurements were made. My backup GPS, which I used for the video, indicated an even higher value due to its drift. My normal GPS had a more correct value, but I had other problems with its data. 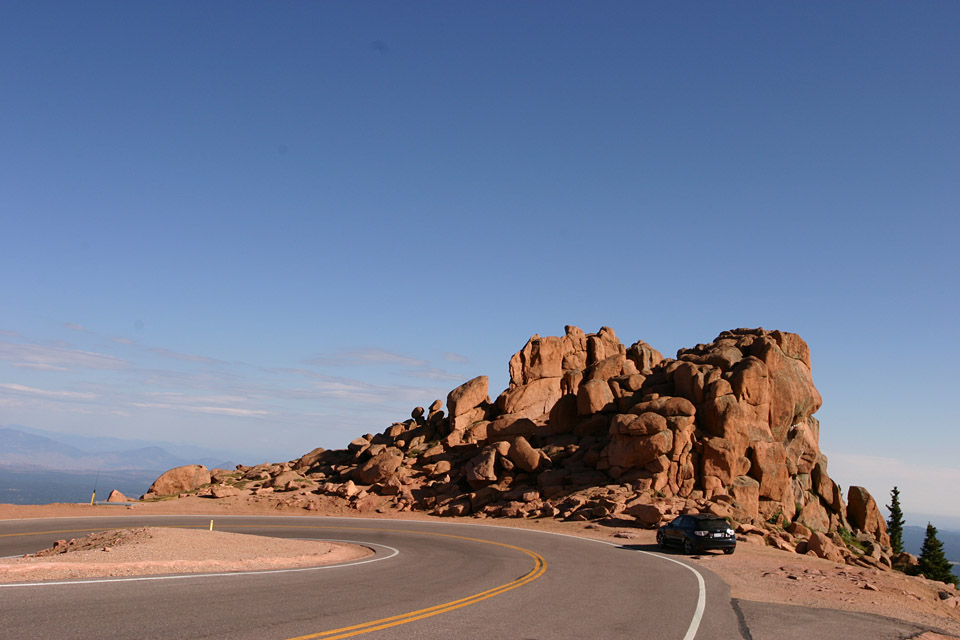 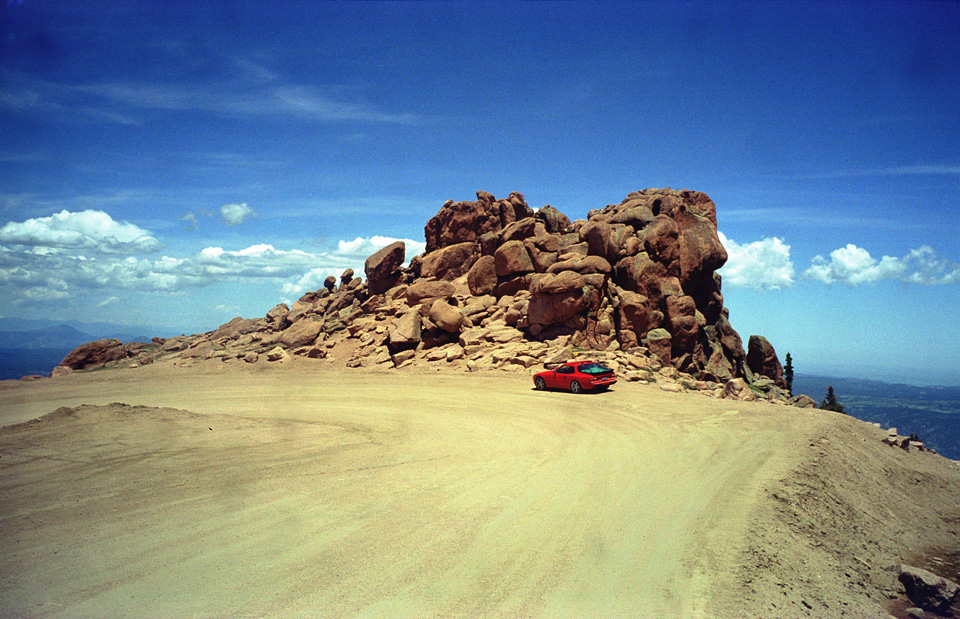 …but back in 1997, the shoulders were wider, the sky bluer, the Porsches redder.

Here are some random thoughts for today: 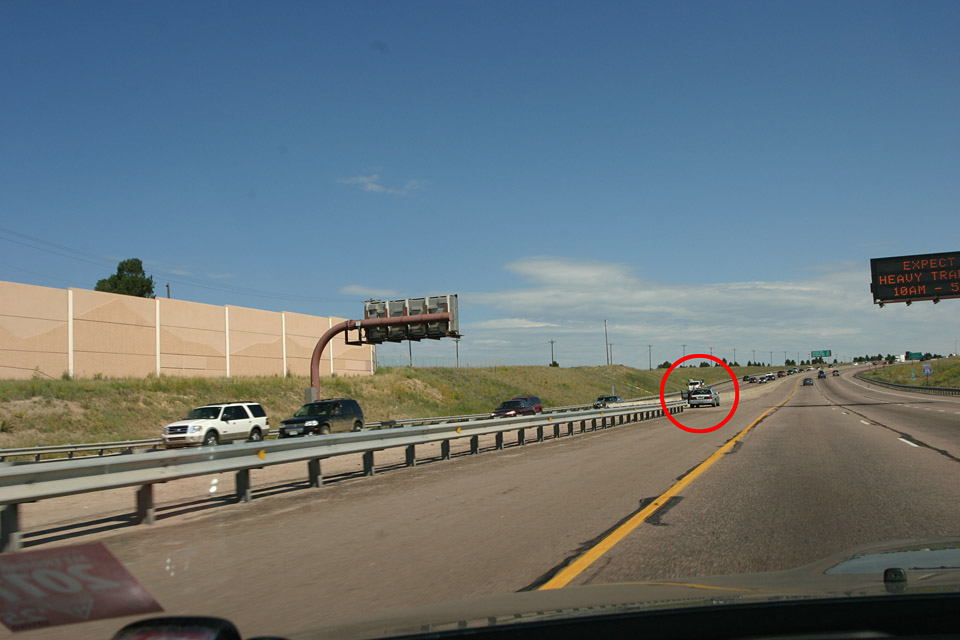 And the next thing I know, I’m home. Just a little more than 24 hours ago, I’m wearing a sweater on top of Pikes Peak, and now I’m hiding from 90+ degree heat inside the house. And because I’m sleep deprived, the last few days don’t have quite a real feel to them right now. At least I’ve avoided doing something really stupid, and I can play with my kids again today.

I have to say that was a good trip for me. But next time, I’m bringing my family.

I’ve always said that one of my life goals is to never be on YouTube. Well, I guess this video officially makes my life goals a failure.

There Is No Substitute…