IRVING — ExxonMobil, the Irving, Texas-based company, posted the largest corporate profits in U.S. history. Its earnings of $39.5 billion for 2006 on revenues of $377.6 billion exceed the previous record of $36.13 billion in 2005, also posted by ExxonMobil.

“When a man tells you that he got rich through hard work, ask him: ‘Whose?’”
—Don Marquis

ExxonMobil company spokesman Kevin Cohen defended the profits, saying that the profits are only 10% of revenues.

“Our revenues are large and they need to be to support the huge investments we make to produce the energy our country and the world needs,” he said.

These investments include the $25 billion Exxon used to buy back its stock in 2006, driving its share price up. Apparently, burning the paper from $25 billion worth of stock certificates can provide enough energy to keep a city like Detroit running for a year. Who knew?

Mr. Cohen then proceeded to light a hand-rolled cigar made of $100 bills with a gold, disposal Bic lighter shortly before getting into an idling Lamborghini Murcielago to another interview across the street. 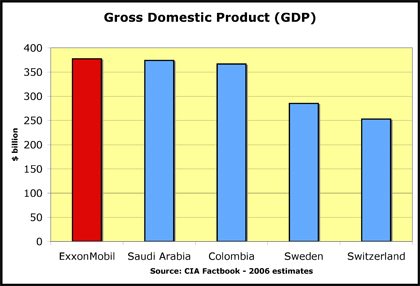