There’s nothing like the smell of a burning red project at work as you leave it behind for vacation. Unfortunately, I’m one of those conscientious types so to take my mind off my disaster, I tried to figure out which is the most relaxing way to travel across Germany for vacation.

This is actually a trick question because for me there is no relaxing way to travel across Germany.

For this post, I’m going to pretend I had the choice between driving a car or taking the train to Berlin. In reality, my wife decided that we would give our kids the European experience and her husband permanent facial convulsions.

There have been many similar comparisons like this before, such as running vs. the subway or flying a plane vs. driving a car. They generally focus on time and cost. I’m looking at it from the viewpoint of an obsessive-compulsive who likes the sense of control when it comes to driving. No bias here. 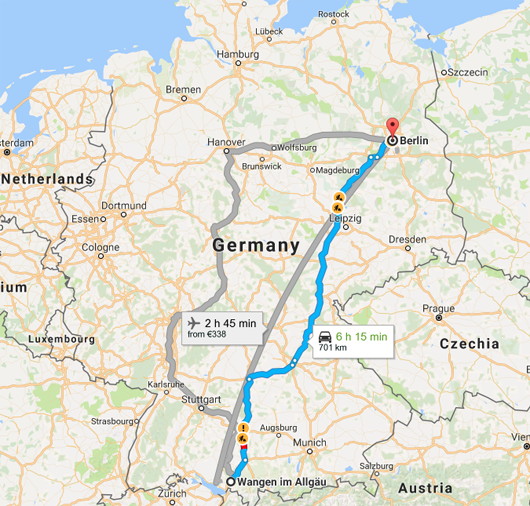 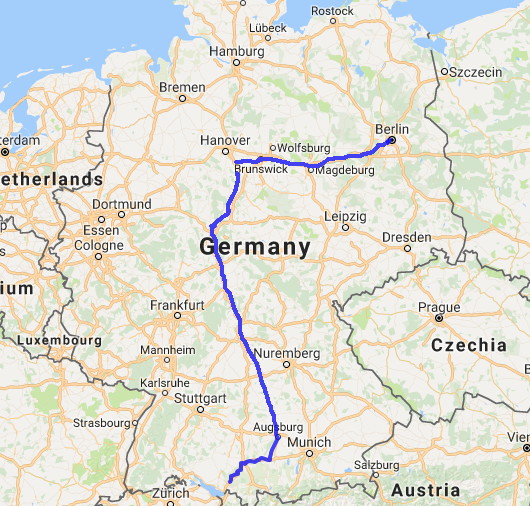 Left if by car, right if by train

🚆There was no taxi1Uber is spelled über here.. Mild concern was turning to full bore panic. My wife called the taxi company, who had no order for a taxi to our place at 7:10 am that morning2They actually did, as they later admitted..

🚘If we were driving, we would have all slept in and left an hour and a half later than planned (after stopping for pastries). I would also be fidgeting because I would have forgotten to check something—the tire pressure/oil level/washer fluid—before we left. I would be thinking about what munchies I would get at the first fill up and how to hide them from my kids.

🚆We were taking four different trains—two regional and two ICE4Inter-City Express— for a travel time of 8 hours. My eye started to twitch a little when she told me what she had booked.

We had to switch trains in Buchloe, Augsburg, and Göttingen. We typically had about 8 minutes between trains, time enough for me to repeatedly hurt myself dragging luggage in and out of trains and up and down stairs as we run from platform to platform.

The first two train rides went without a hitch. The third was running 15 minutes behind. The twitching in my eye was quite pronounced as we boarded this late train.

When it became clear that our train wouldn’t be able to make up time and that we would miss our connection, they tried to contact our train to Berlin. It was arriving in Fulda a few minutes ahead of us, so they tried to have it wait until we got there. Unfortunately, the train never got the message so at the last minute, they had to come up with a new plan for Berlin travelers.

We got off at Kassel-Wilhelmshöhe instead and our kids got to experience the wonders of its train station. To be quite honest, the snack kiosk there will be more memorable for them than the museums we’ll make them visit in Berlin.

The next ICE train to Berlin came about 45 minutes later. We had lost our reserved seats, but at least we made it to Berlin where we only had to take even more trains (S-Bahn) to get to our Airbnb. 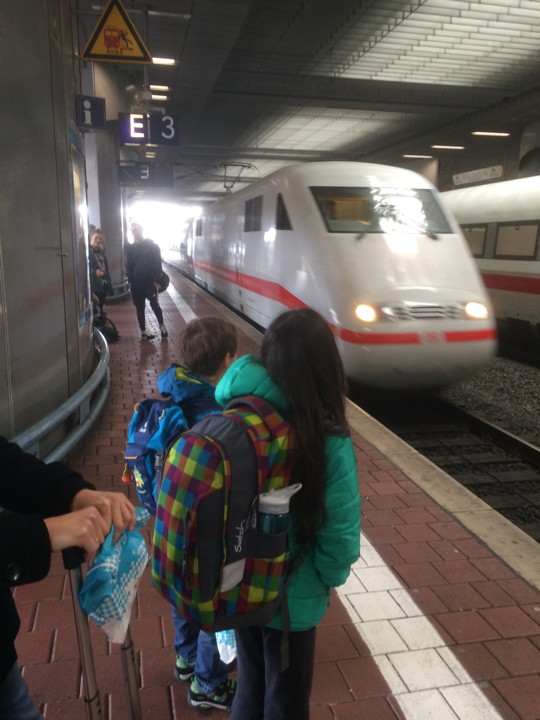 You should thank me for not making a Vanilla ICE joke here.

🚘With a car, we would be sitting in traffic on the autobahn as we join everybody in Bavaria on the first day of school holidays. My frustrated mutterings would be drowned out by my children’s complaining. My wife would be either posting on Instagram the group selfie we would have taken in the car when we left, or re-reading her Berlin travel guide.

I would only have to drag our luggage twice, but it would fill the hatch so that I wouldn’t be able to see out the back. If you can’t see out the back, the best way to drive on the autobahn is to go faster than everyone else. It’s the only safe way.

Instead of the wonders of a train station, the kids would be experiencing the charms of the autobahn Rasthof 5Still more memorable than Berlin museums for them.. I would have missed at least 2 instructions from my navigation system because those are evil and are always trying to get me lost.

And we would have probably still made it to Berlin sooner than the train.

🚆Riding on the train itself is not bad. A normal person can actually fit in a seat, unlike in an airplane. There is no need to exert elbow dominance over your neighbor for the armrest. Like an airplane, however, you get the conversations, chattel, and smells of all the other passengers in your area6On my next flight, I would love to see a flight attendant walk down the aisle asking, “Tickets, please. Take out your tickets, please,” and then validate them..

🚘In the car I’d still be muttering to myself about traffic and slow trucks and crazy Swiss drivers and speed limits. And when we arrive in Berlin, the muttering would be replaced by non-stop swearing as I look for a parking spot while my eye twitches constantly.

Plan for the worst, hope for the best, then stay at home.

Also, stop complaining and thank your wife when she makes all of the travel arrangements because you’re too busy working all the time.

Mussolini may have done many brutal and tyrannical things; he may have destroyed human freedom in Italy; he may have murdered and tortured citizens whose only crime was to oppose Mussolini; but ‘one had to admit’ one thing about the Dictator: he ‘made the trains run on time.’
—Ashley Montagu and Edward Darling, The Prevalence of Nonsense

Planes, trains, and automobiles—annoying travelers since the invention of the wheel.