Well, Son of a Wampa. My Buick Skyhawk does exist.

I’m not only fortunate enough to be an obsessive data taker, but I’m also a compulsive data hoarder. Bonus!

After digging through my stuff, I found a 26-year-old dot matrix printout for my 1984 Buick Skyhawk Custom. It’s not complete, but I’m unwilling to try digging deeper. Risking marital strife by obtaining a vintage Apple ][e for a 5.25″ floppy and the program pfs:Plan doesn’t seem worth the effort.

So the Skyhawk log has some gaps and jumps, and I missed its end by two years and a few thousand miles, but it’s better than nothing. (I was apparently not obsessive enough in my younger years.)

A friend, who I’ll refer to as Not Steve, suggested to include an overall miles driven line because he is also an engineer. So I’ve added a new curve of my accumulated miles driven.

I am counting only the miles when I was the driver of the cars. So for the 944, I subtracted its mileage when I bought it. I also discounted the miles in the Civic when I wasn’t the primary driver.

Adding the Skyhawk also explains the mystery of the Beretta mileage. I mentioned that although I bought the 944 after the Beretta, the average miles I drove the Beretta didn’t seem to change. When I factor in the mileage of the Skyhawk in the graph, it makes sense. The Beretta was generally always one of two cars I drove. There were only a few months between the untimely demise of the Skyhawk and the purchase of the 944. Therefore, the amount I drove it didn’t vary much. 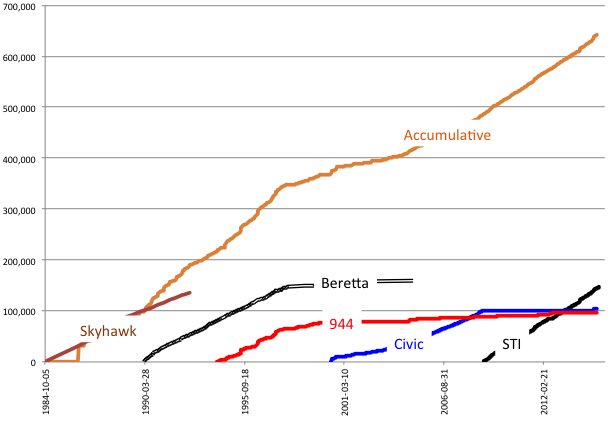 Crankiness Rating: 3 out of 11 (Resisting the urge to dig deeper. And to plan a road trip.)