Things escalated recently. Technical jargons were thrown, tests conducted, graphs plotted, and favorite measurement units disparaged (“MPG or die!” “Viva le liters/100km!”). Yes, things can get ugly with engineers during lunch-time discussions, especially if one of them can speak French.

This all started because someone actually read my recent post about gas mileage. The topic of deceleration fuel cut-off (DFCO) came up. I’m constantly surprised that there isn’t a universal acceptance of this concept. When I’ve mentioned it to some engineers, they’ve responded incredulously: “How can the engine turn without gas going in the cylinders?!”

My response was something like, “I read that on the Interwebs.”

I’m an algorithm engineer. I deal with voodoo and black magic all the time. If you tell me that through witchcraft and eye of newt that an engine can keep going without fuel, I’m going to believe you.

My colleagues are apparently not as technical as I am.

So this is what was proposed. While a car is driving down the road without throttle input, turn the ignition off. If DFCO exists, then there should be no change in the car’s deceleration.

Because I’m an idiot, I volunteered to do this test.

“Never trust an experimental result until it has been confirmed by theory.”
—Arthur Stanley Eddington

My plan was to go down Kensington Hill, turn off the engine, and see what happens.

(“Let’s see what happens” was probably also uttered by Alfred Nobel right before he invented dynamite. And right after he said, “Here, hold my beer.”)

Kensington Hill isn’t an actual place. It’s just a steep hill on Kensington Road where no one I know does no unofficial testing on. Technically. And I just happen to drive on it on my way home. 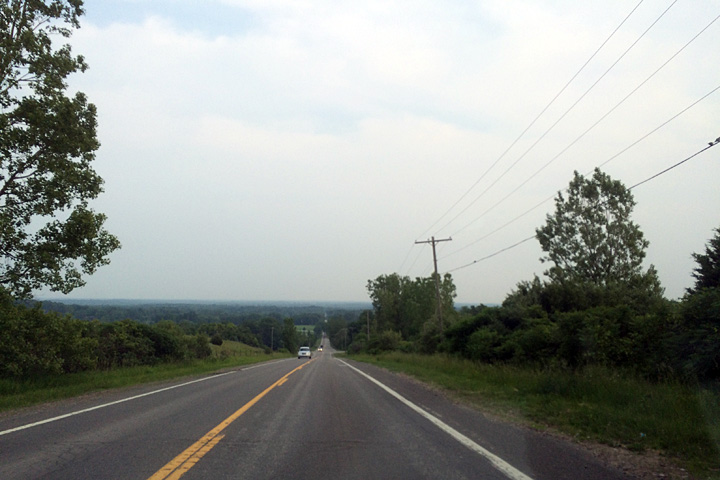 This is literally the high point of my drive

And so as I crested Kensington Hill on my way home one day, about half way down, I simply turned the ignition switch from RUN to ACC (Accessory) while leaving the car in 6th gear. I did not turn it to OFF because that would also shut down the radio.

The car continued going about the same. When I looked at the data, it did start slowing down, but that coincided with a change in the slope of the hill.

In my mind, that meant that there was no difference between the engine ON (in DFCO) and OFF (injectors shut off). Therefore, my car must have DFCO.

Once this little experiment was over, I simply switched the ignition switch from ACC back to RUN, and all was well again.

Later on this drive, I tried something else. While going down a hill, I took the car out of gear and rolled down with the car in idle. As seen on the graph, my gas mileage went up. Why my car tells me I get better gas mileage while idling versus having no fuel going to the engine is still a mystery to me. 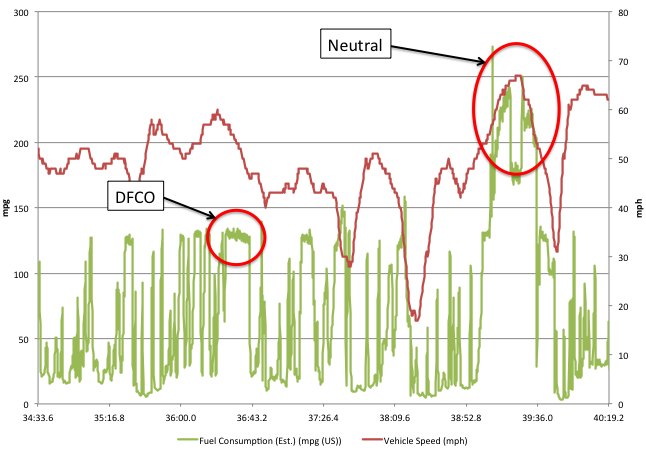 As a bonus, I also got to use Powerpoint for this Excel chart.

What Have I Learned?

1. I don’t know if I conclusively proved beyond a shadow of a doubt that DFCO exists, but for all practical purposes, that’s close enough (said the engineer).

2. Engineers like to prove things. This has been proven in the past.

3. It is possible to turn off your manual transmission car while driving down the road. I’ve done something similar with an automatic transmission car during testing on I-75. Hypothetically. While nothing happened in my circumstances, be aware that turning your car off is highly not recommended.

Depending on your car, important subsystems like steering, brakes, and radio may be inoperable or have reduced performance. I would like to say, “hey kids, I try this at home because I am a trained professional!” But I’m actually just a moron, so don’t try this. Ever.

Now that this riddle is solved, it’s time to move on to ponder deeper mysteries, like does the Loch Ness monster or sporty AWD station wagons with 300+ hp and a manual transmission really exist?

(I forgot to use my GPS logger for this experiment.)