After months of stress (and weeks more of it to come), I’ve finally arrived in Germany for a two-year assignment. This is my third time living in Germany, and the first with children.

Living out of suitcases for weeks, sleeping on the floor of an empty apartment, getting sick because I seem to be always outside in the cold, dreary German winter, it’s going about as well I had expected. The kids, who are attending German public school, haven’t even mentioned “red rum” in days, which is a relief, considering the trauma we put them through of changing homes, schools, countries, and languages.

And I’m pretty proud of myself that I was able to keep from being cranky in Germany all the way until Munich airport when I sat in our rental car—something called a Toyota Verso, which is like a non-hybrid Prius hatchback. So I think I’m off to a pretty good start overall.

Being the lazy American that I am, however, I foresee trouble in the future. For example, I have to open the apartment’s garage door by hand. Like an animal. And then walk outside to get to our apartment. The garage and the living quarters are not linked, just like in the middle ages. 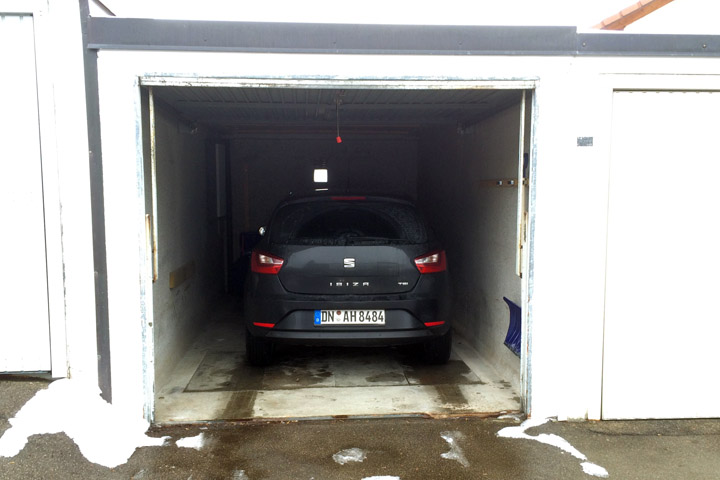 Have I mentioned that it’s also against the law to warm up your car in the morning here? I think you’re supposed to wait for global warming to thaw out your windshield. I’m not sure—my German is rusty.

Leasing a car is sloooooow and expensive. A two-year lease for a Golf-sized car here is about twice as expensive as what you can lease a Cadillac in the States. (Also, no jokes about the diesel Golf.) And you have to wait, like, days to finally get it after picking one out, if you ever convince someone to give you auto insurance for it.

So I’ve decided to list the top three most annoying car-related things while living in Germany. I am keeping this related to cars, so my mind doesn’t explode by thinking about a new job, no furniture, bureaucratic paperwork, no internet for days—all of the other things that are currently annoying me here.

Let me start with public parking. There isn’t any. And if there is, you have to pay. And if you do accidentally find one and pay for it, it will just big enough for a golf cart.

I know that in some of our big cities like New York City, residents sometime have to pay for regular parking spaces because I saw it on Seinfeld. But I grew up in the Midwest, in the Detroit area, where parking lots fill the horizon as far as the eye can see. These lots have spaces big enough to fit a Great Lakes freighter, or even a Chevy Suburban. And except for liberal, tree hugging, Subaru-driving cities like Ann Arbor or Royal Oak, these spaces are free like beer and speech.

Germany today has more problems than parking, like the refugee situation and the entire fate of of the European Union. But this is the first world problem that makes me the most cranky right now. As the land that invented both the automobile and the autobahn, Germany should follow up those achievements with lots of big, free parking spaces. Aller guten Dinge sind drei.

Yes, I’ve talked about parking in Germany before. And most of it is still true. But there’s a special parking rule here that only Germans know about. After much digging, I think I have it figured out.

If there’s no specific rule against parking, you can park there.

Now, you may think that this is obvious. And you would be wrong.

Below is an example. The overlay in blue indicates cars parked on a sidewalk. The red overlay is for cars parked in the gap between the traffic islands. The yellow is the same as the red. These were filled up later that the morning. If people can find a spot that doesn’t block someone else it, it’s good.

There are a couple of random horizontal patches of concrete around the buildings that are also used for parking that I didn’t get in this picture. 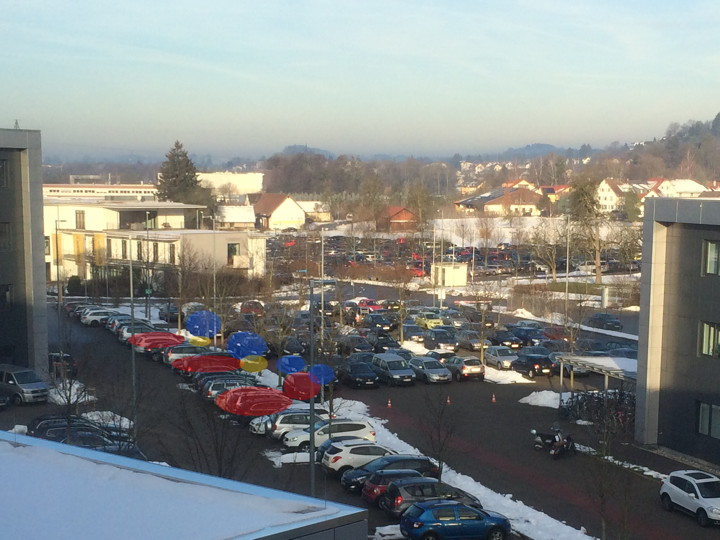 Cars technically not in No Parking zones

Just remember this next time someone says Germans aren’t creative.

“There’s no crime in Germany because it’s against the law.”
—EMan

(Wait—why did I move to Germany again?)