I consider myself a car-driving fool, so traveling to a city where cars are not used is a bit odd for me. But Venice is pretty unique, so I don’t mind coming here. It’s been sinking for centuries, so who knows how much longer it will be around, which is as good of an excuse as any to visit.

There are many different boat tours in Venice. The kayak tour may be the most interesting. It isn’t quite a do-it-yourself tour because there is a guide in the kayak next to you. I’m pretty sure I’m not fit enough for this tour. 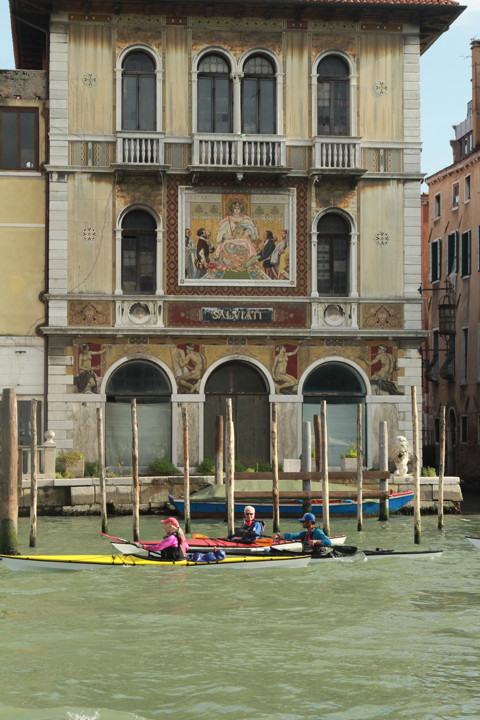 This is probably still better than Segway tours

The “boat” most people think of in Venice is the gondola. I’ve never taken a ride on one, probably because 1 gondolier-power is only about 1/6 hp, but it does look like a nice ride. 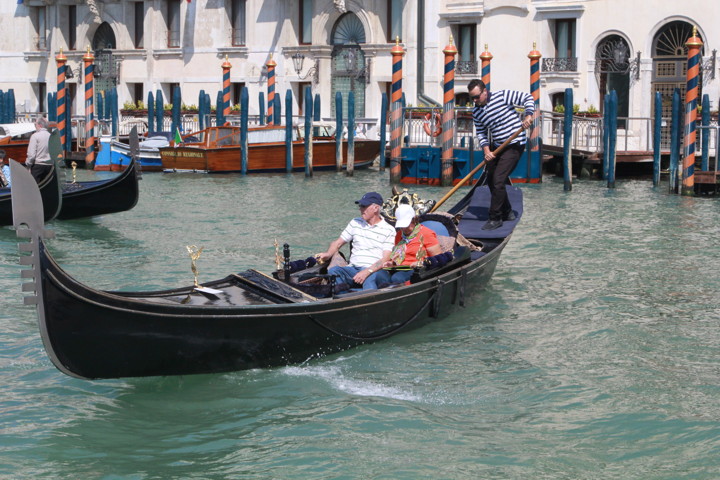 You can get one in any color you want. As long as it’s black, of course. 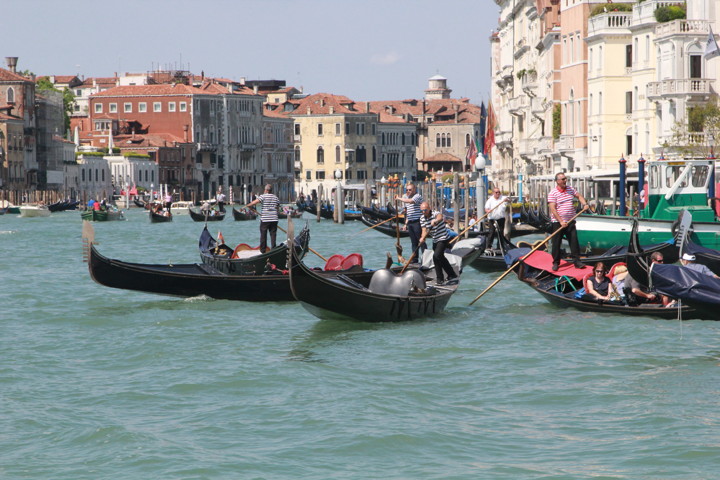 I wonder if the gondoliers are tempted to slam or hellaflush their rides.

The boat I really love here is the wooden taxi. I just find them gorgeous, especially those with the wooden hulls. Like the gondolas, I’ve never taken a taxi, probably because I’m cheap. But if I were staying on the island and had to drag kids and luggage with me, this may be a better option than a crowded vaporetto. 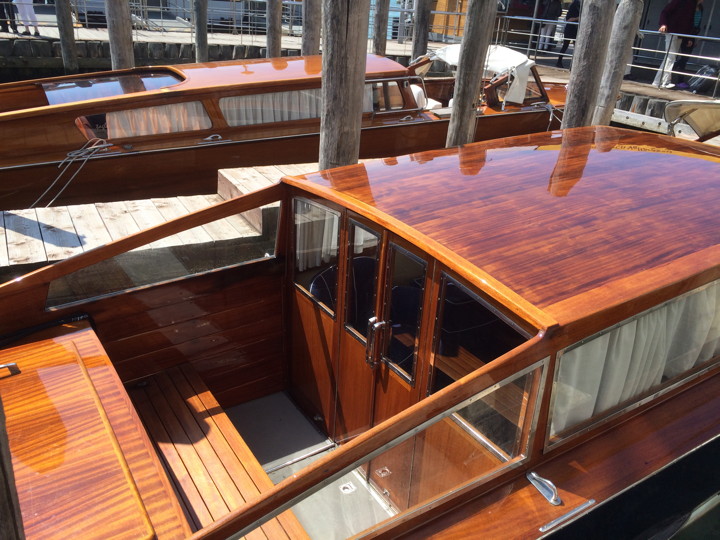 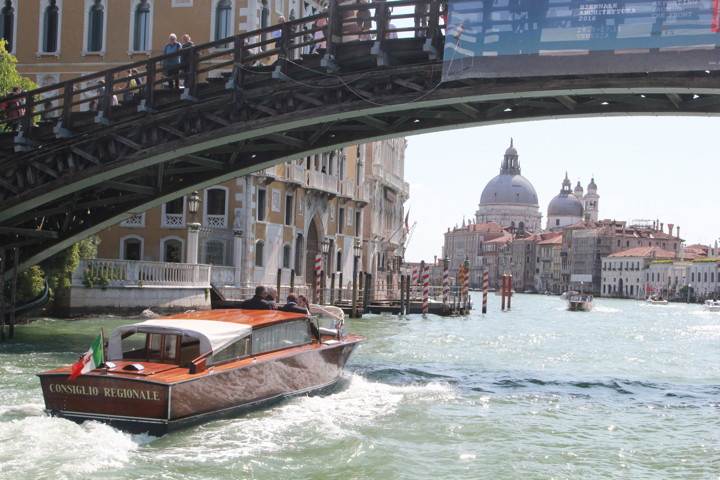 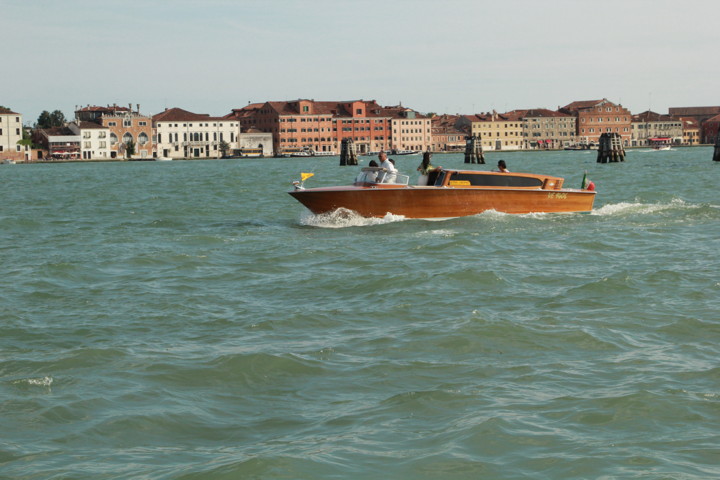 This looks more pleasant than my recent taxi ride in Kalamazoo

Most of the people in Venice get around on a vaporetto. These are the public transportation boats of the city. There are different lines that can take you through the canals, or even to the other islands like the Lido or Murano. The main line is the No. 1, which goes up and down the Grand Canal. At the right (or wrong) time of the day, like at rush hour, this boat will be completely full. I can’t imagine how stuffed they can be during the high tourist season.

The vaporetto driver (captain?) and the tie-the-rope-to-the-dock-dude (rope guy?) are pretty good, which is important for things like keeping people from having their feet crushed between the boat and the dock.

We had bought 72-hour passes for 40€ each. They had to be validated each time we got on a bus, tram, or boat. Someone actually “controlled” our tickets on our last day, right before our stop, on a full boat, to make sure we had validated them. 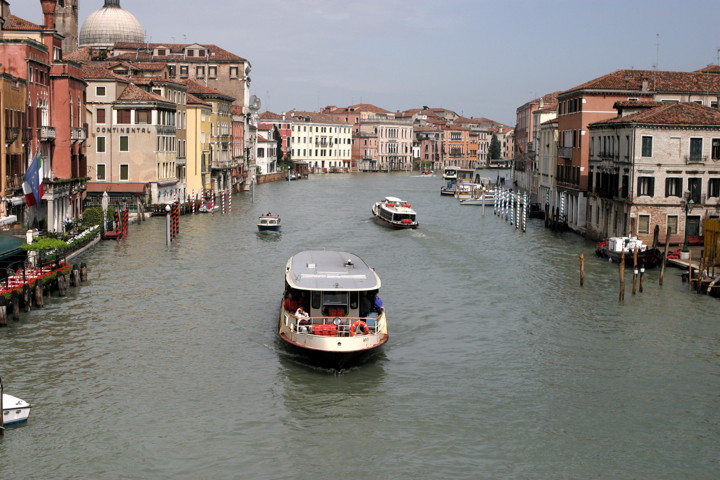 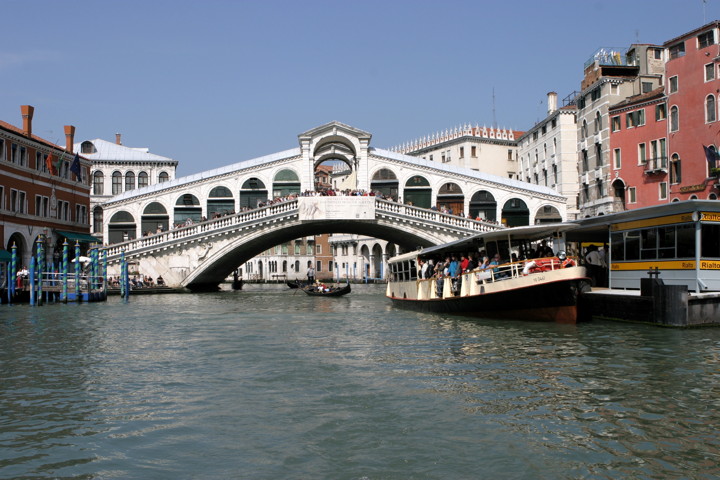 The two pictures above were from 2004. Here is how the Rialto Bridge looks today. It is under construction and has a giant ad covering it.

Move proof that Diesels in Europe are noxious

We seem to always run out of time to visit this sailing ship museum. This is the Amerigo Vespucci, named after the Italian explorer whom the Americas is named after. That would be cool to see this sailing out in the open waters. 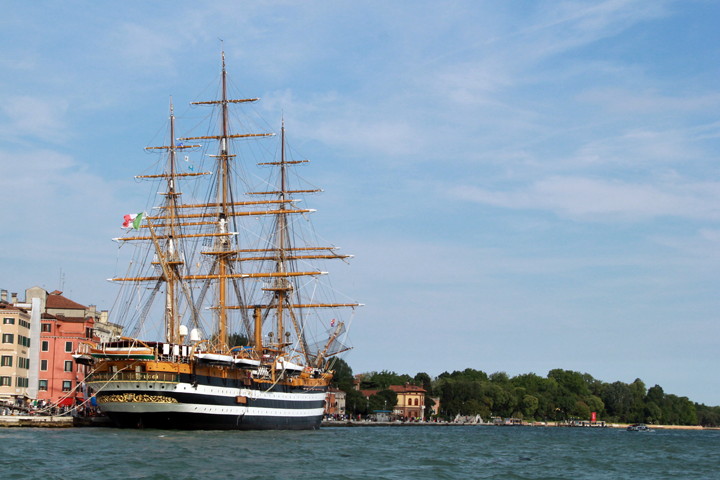 Green Is the New Brown

As I was watching the local deliveries, I started wondering about my favorite delivery—anything from Amazon. Then my wife pointed out this UPS boat to me. She had also taken a picture of a DHL boat. It was nice to see a touch of normalcy on the island. 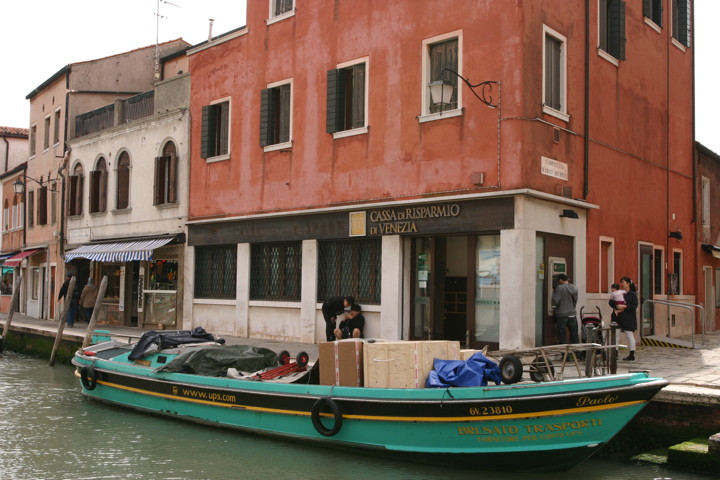 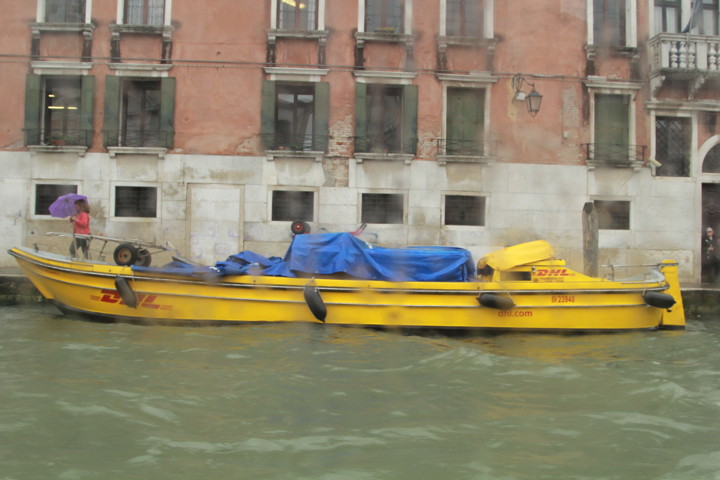 “Neither snow nor rain nor floods nor climate change…”

The Men in Light Blue

The three blue boats on the left are the local polizia. I looked for a donut shop in the area, but didn’t find any. Maybe in Italy they hang out at cannoli shops instead. Or at Starbucks. 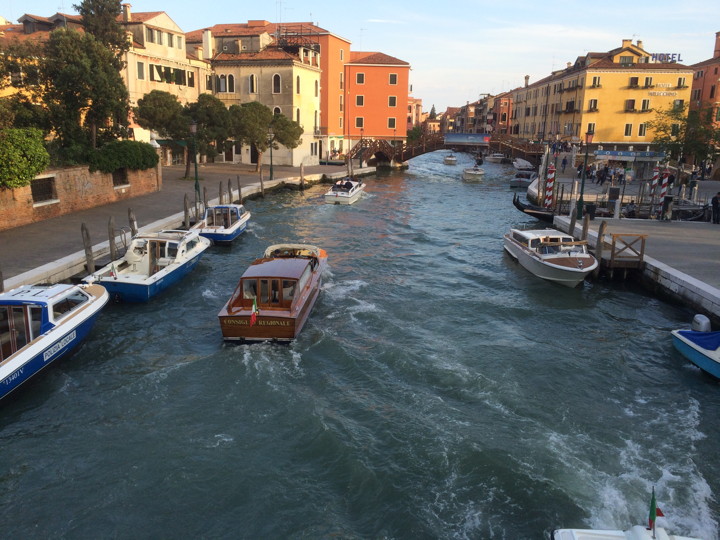 While walking around I wondered how many tourists have drowned while taking a picture of themselves with a selfie stick. I hope there’s at least an infographic of this. Wishful thinking.

—Spirit of the West

[1] Another joke would be to build a wall around Venice, except… it’s no joke. The MOSE project, whose acronym is the Italian name of some biblical guy who parted the Red Sea, is designed to prevent flooding tide waters from overwhelming the city. This 5.5€ billion project consists of three sets of gates that close the lagoon inlets. These metal gates are hinged at the sea floor and swing up when deployed. A set of locks will also be built to let boats in and out while the gates are closed.

There are concerns for this project, from funding to environmental to sanitation. It is expected to be operation sometime between 2018 and 2020.↩

Cruisin’ the main drag (while on vacation) is always fun.