I hate critics, probably because I don’t like being criticized. I think to be a critic, you have to have done that thing that you are critiquing. If you want to be a restaurant food critic, then you should have worked as a cook in a restaurant. I don’t care if you can taste the age of the duck in the foie gras you just had— being able to eat and type shouldn’t be the prerequisite to being a food critic.

I’ve never written a book (or been a race car driver, or been on tv), so I’m not going to review this book. Instead, I’m going to write randomly about Ben Collins’ autobiography, The Man in the White Suit. While this may sound suspiciously like a review, it’s not. The last book I reviewed was my last paper in high school. After spending the entire night fighting an electric typewriter (a hardware version of Microsoft Word, but less frustrating), I vowed never to review another book again. So this is emphatically not a review.

(The Man in the White Suit is the Stig, the famous, anonymous, tame race car driver from the BBC show Top Gear. Ben Collins, no longer anonymous, played the Stig on the show for the last seven years. Read my other post on this topic.)

“Some say he’s terrified of ducks and that his penis has a chicane in it. And a four-mile straight. And a hairpin. All we know is…. he’s called the Stig.”
–Jeremy Clarkson

With that said, let me get a couple issues I had with the book out of the way. First, in a few places, it just leaves you hanging. For example, there was a long section on driving the Bugatti Veyron. So what was the power lap time of the Veyron? Was it the fastest? He never says. There was a big build up, and then nuthin’. I’m sure there are some guys reading this that know how frustrating that is. He talks about his army training at length, and then stops. His army career was later summed up in one sentence after several chapters of non-summing up. And that’s not the only place he leaves you ha

Secondly, my British is not only horrible, but it’s apparently also rusty. We don’t have “lairds” in Detroit, just “lard-asses.” “Och aye?” “D’oh!” I don’t know the difference between “horrid little oiks” and “jammy dodgers.” Maybe if I “gave it the beans this weekend,” I could figure out what some of this mean. Or I could just wait for an American translation of the book to be released here.

(I once took a business trip to Dunton, England. One night I ate at a Pizza Hut next to the hotel. Although I spoke in my American Midwestern, and the waitress in Duntonese, we literally couldn’t understand a word either of us spoke. I resorted to my best virile grunting and pointing at menu items with a stick to order my meal. I still ended up with the wrong menu item, which I quietly ate.)

Third, it’s an autobiography. I don’t how “enhanced” Collins’ memories of his past are. In my own autobiography, I will explain how my engineering prowess helped Ford and Kettering design cars; how I gave Bill Gates a copy of my software code to use; and how I co-invented the internet with Al Gore. I’ll tell the story how I re-gifted a Christmas present to Steve Jobs for his first black turtle neck shirt. I will try to get a younger, better looking version of Brad Pitt to play me in the movie, but knowing how Hollywood is, I know I’ll get Shia LaBeouf instead (whom did he black mail to star next to Megan Fox? Or to be in movies at all? Indiana Jones? Really?).

Where was I again?

Collins talks about three main areas of his life: racing, the army (reserve), and tv/entertainment, which some family life thrown in for spice. Each of these areas are relevant (in a way) to me right now, which made the book very engaging to me.

His brief coverage of his family life included car influences in his life, from his father to random driving adventures. I think most car guys/gals can relate to these typical events. The family episode ends somewhat sadly, though. I won’t spoil it here. Buy the book.

At some point, he wasn’t sure if he could make a living out of racing, so he joined the Army Reserve Regiment. I actually enjoyed reading about the training he was doing, although it could easily be condensed to: get yelled at; carry heavy things uphill a long way over rough terrain in bad conditions; get hurt; repeat.

I’ve been running a lot recently so it was interesting for me to hear him describe his grueling marches. I’m pretty slow (dew forms on me if I run in the mornings), so I try to run for distance. Still, I couldn’t picture myself doing some of the training he had to do.

I found it amusing that he simply mentioned running a marathon. Nobody just “mentions” a marathon. If you ran a marathon, you work that into conversations. You wear your complimentary marathon shirt everywhere you go. You buy a “26.2” sticker for your car. And bike. I don’t know if I would ever run a marathon, but if I did, you can bet you’ll know about it. For Collins, it’s simply an aside to his army training.

His racing exploits were my favorite parts of the book. But I’m a sucker for stories of knifing through the field in Le Mans. His accounts tell the story that sometimes talent isn’t enough. Although he drove well for Paul Stewart Racing, for example, he was let go because he was “too old.” He was almost a test driver for the Formula One team Arrows, but was about £1.5 million short on funds.

“The best way to get a small fortune in racing is to start with a large one.”
—racing proverb

Collins started racing in open-wheel cars, going from Formula First to Formula Three in his pursuit for a Formula 1 ride. He landed in a Le Mans prototype instead. He provided a lot of detail in his outings. He described battles for positions, track conditions, and events leading to accidents. I actually found this to be the most exciting part of the book, as I love racing (but not parades). There’s at lot of action and suspense, and you get the read what Collins was thinking about while it was happening. I don’t know how accurate it was, but it made for good stories. 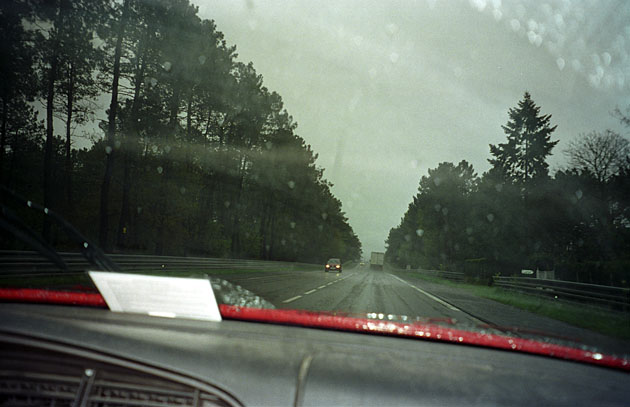 Me and my 944 Turbo on the Mulsanne Straight. In the rain. Not quite in the dark.

Although his team wasn’t able to finish, my favorite racing story was his first drive at Le Mans. In the dark. While it was raining. He was the fastest out on the track, improving their standing from 17th place up to 4th place while unlapping the leaders. In the wet. Until the fuel pump died.

What I’ve always loved about the great drivers like Ayrton Senna and Michael Schumacher is their ability to excel in the wet. Collins seems to possess this as well. He is, after all, the Stig.

As an aside, Collins discovered in his racing travels that the roads in Romania were bad, much like I did:

“[Nicolae Ceausescu] left nothing in the budget for the roads, which were as pockmarked as the surface of the moon.”

As expected, a large portion of the books is dedicated to his time at Top Gear. I enjoyed reading the trouble he went through to keep his identity anonymous, including ironically dressing up like a terrorist just to get into the airfield where they film the show. He described a lot of power lap stories, where he (or guests) drove around the race course to post their best lap time. He did it in cars they were reviewing, and celebrity guests did it in a reasonably priced car.

This was initially interesting, but when he started talking about how he was trying to squeeze out tenths of seconds, it got a bit painful. I started having flashbacks of my autocross days trying to figure out how to go a little faster each run, but ultimately going slower because I got messier the harder I tried. This didn’t happen to the Stig, of course, but it just conjured up annoying memories for me.

Collins also drove as a stunt driver in a couple of big budget movies, National Treasure 2 and Quantum of Solace, and in Top Gear Live! events. The Live! events were held in arenas with fast vehicles exploding while on fire and being smashed. In the dark.

The behind-the-scenes stories of Top Gear were fun. After reading about him driving a black Corvette Z06 inside a shopping mall while chasing a Ford Fiesta, I had to re-watch that episode, which was already a favorite of mine. Another episode I had to re-watch was where the four Top Gear presenters (Jeremy Clarkson, Richard Hammond, James May, and the Stig) raced through London by land (car), sea (boat), more land (bicycle) and public transport to see who could get to London City Airport first. Collins had just suffered a serious injury and a personal tragedy prior to this episode. His bits in this story were also funnier to me when I found out some of them were improvisations. The car same dead last, of course.

The stories Collins wrote about Top Gear just enhanced the show for me, especially since they are more interesting than what I’ll have in my autobiography (“so there I was, about to differentiate this menacing equation…”). He also provided some insight about the other hosts, even if just to confirm what I’ve seen so far in the camera.

James May is a bit pedantic, Richard Hammond is ballsy, and Jeremy Clarkson is a big, pompous, arrogant know-it-all ass.

I’m pretty sure if I had to work with Jeremy Clarkson, or Jezza, like Collins did, I would have eventually cut the brake lines in his car, disabled his airbags, and put Justin Bieber in infinite loop in his radio. Then I’d find a step ladder somewhere so I could climb it to slap him upside his head. Unfortunately, I also find Clarkson clever and witty, and is my favorite of the three, so there you go.

I was a bit sad to find out that this book caused a big row between Collins and the other presenters. Jeremy called Collins greedy. James May was a bit put off, or whatever it is the British do when they get mad.

There are many possible reasons for their reaction. The first is Ben Collins was their friend and now they feel betrayed that he outed the Stig. The second is that they’re actually greedy bastards and care only about themselves. Another more cynical possibility is that this spat has been carefully coordinated to maximize ratings when the series returns, and people tune in to see how the Stig will be killed off.

Or it could be simply that the British are simply just “eccentric” and we Americans can’t understand why they drink so much tea, why their beer is so warm, why their money is all in Icelandic banks, and whatever other hackneyed stereotypes we Americans have of the British.

If I had to fall on either side of this squabble, I would side with the fast, low-paid, race car driver over the rich, slow but entertaining presenters.

My non-BBC licensed, Chinese-made, Amazon-bought tribute to the Stig