I give myself one job when we go on vacation: driving the car. My wife handles the trivial things like: packing, lodging, food, sights, and kids. Of course, we only drive if our destination is in the same continent1“Ok, Schatz. I’ll drive to San Francisco, and you take the 18-month old and fly from Detroit a couple of days later. I’ll pick you up at SFO airport.”.

Road trips require planning, some more than others. For our Lago di Garda vacation, it was as simple as just wanting to go south through Switzerland, detours excepted. Coming back home, well, I had to make contingency plans.

On our drive down, the Subaru’s air conditioner went kaput right after we got off the autostrada and into an Italian vacation traffic jam. That meant we needed a cooler drive on our way back. When I saw the parade of German cars headed home through the Brenner Pass, I knew we would be sitting in traffic with them for at least an hour under the hot Italian sun.

It’s a road up through the mountains, where the air is cooler and we wouldn’t be sitting in traffic. Yeah, that’s the ticket.

An intelligent person can rationalize anything, a wise person doesn’t try.
—Jen Knox

Go that way really fast. If something gets in your way, turn.
—Monique Junot

I had heard about Stelvio Pass on Top Gear,3On this episode Top Gear mentioned the San Bernardino pass in Switzerland, which we also passed through on the way to Italy. right before they named the Transfăgărăşan the greatest driving road in the world. This was my chance to take my Subaru (and enclosed family) on the World’s Second Greatest Driving Road.

So instead of heading north on the autostrada A22 with the rest of the Germans driving back from vacation, I dove for the exit after Trento and took SS43 north to Cles. From there we headed east on the SS42 and followed the signs for Passo del Tonale. In my head I translated that as “a pass through a tunnel,” which of course was wrong. But I knew we were on the right track as motorcycles raced by us going up the mountain.

The motorcyclists4I usually scooch right and wave them by. always know where the good roads are.

They are also quite insane.

Passo del Tonale on SS42. Check out what’s coming ahead.

Our next goal after Passo del Tonale was the town of Bormio, and the Garmin navigation told us to take SP29, the shortest path.

Wife: It says here that trailers and campers aren’t allowed on that road.

The road seemed fine until we passed a gate used to prevent traffic from going through during bad weather. We weren’t sure if that was still a road past the gate or just a walking path up the mountain. Naturally I decided to go ahead because I’m an idiot.

I got about 100 meters before I was grill-to-grill with a giant VW van with no way around. After a few more, “huhs,” I reversed (rolled backwards) past the gate and let the van and all the traffic behind it go by. My wife tried to decipher the Italian sign at the gate. I heard something about “2 km of dangerous road,” and thought, that’s not too far.

Besides, a herd of motorcycles just blew past me. If they can make it up a narrow, winding mountain road, so can I.

How the heck did that van get there?


Video is fuzzy in the beginning, but I fixed the focus later when death was less imminent.
I stopped a lot because I didn’t want to fall off the edge of a mountain. Funny that way.

First, let me say that my wife is amazing. I want to thank her for not beating me over the head with our DSLR camera and pushing my body over the edge—possibly because she was waiting for me to drive the car back down the mountain first. I did have to let her get some fresh air at the end of this video.

Note how many bicyclists there were, including families with kids. This was the case throughout our drive. I’m normally huffing and puffing just going up a driveway, and some of these people rode up a mountain. Going down is probably even scarier. Respect.

I also have this problem that I don’t know where the edges of my car are. Problems are usually bad, this one especially so in the Alps. Pulling next to the open edge and certain death was always an adventure. Thanks again to the wife for the firm warnings.

But (spoiler alert!) we made it through this pass and took a breather in Bormio, where I had to tell my wife that although that was our second mountain pass of the day, it wasn’t Stelvio yet.

My son slept through the whole thing.

I knew we were close when I saw the motorcycles staging. The road up to Stelvio felt like it was twice as wide as the previous pass. And it even had guard rails and stuff. We drove up from the south side and stopped about three-quarters5Actually, 62.5%. My original guess of 2/3 would have been closer. from the top to take some pictures. We were only at 2,177 meters64761.6 cubits or 10.82178 furlongs (US) at that point, but the air was already cool and crisp (because a/c, remember?) and I was short of breath. But that’s probably because I’m out of shape and had stopped breathing an hour ago.

This was a piece of tiramisu compared to the previous pass. However, we still had to check for on-coming traffic at each right-hand hairpin (tornante).

I started the video in a tunnel where we had to wiggle our way around the on-coming traffic. We had to fold the side mirrors for that. 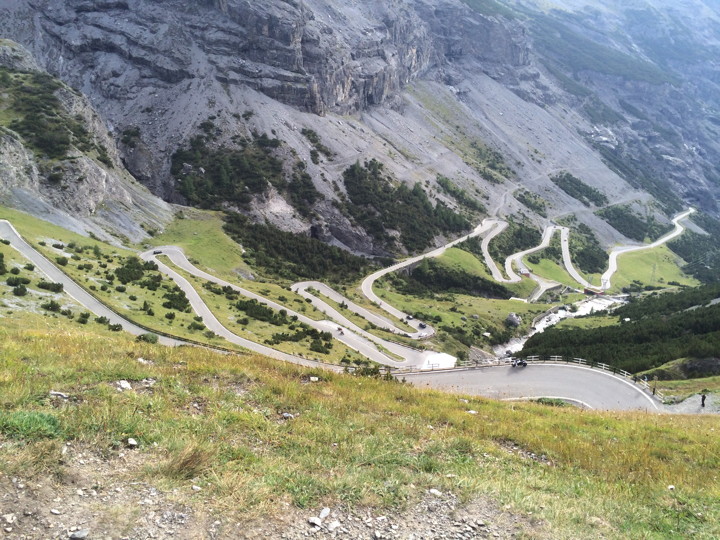 Near the top we saw a couple of guys with a 911R from Ludwigsburg (LB). I’m assuming they’re a writer and a photographer with a loaner from Porsche. Of course they’re going to take it to Stelvio Pass. 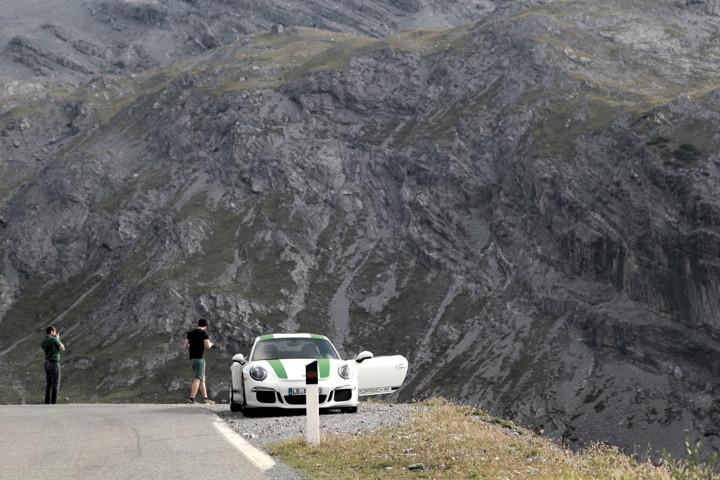 Does Porsche know you’re out here?

We also saw two Ariel Atoms, a few Corvettes, a tow truck with a convertible Mercedes on its bed, and half of the motorcycles in Europe. On Top of Old Stelvio

Stelvio Pass72,757 meters or 548.2 rods—it’s the second highest paved pass in the Alps. itself was crazy. It was packed with motorcyclists and crazy tourists. It reminded me of the pictures I’ve seen from Tail of the Dragon8I went in April when it was deserted.. We wanted to take a picture from the north side, but we couldn’t really stop. That was the best view of the road from above. The view from the parking lot just beyond it would have to do. Or I’ll just check out the satellite imagery to see the most road.


I only added this video for the view at the end.

The way down was pretty easy in comparison to where we were before. I only had to back up once for a bus that had right of weight (0:22).


It’s hairpins all the way down. 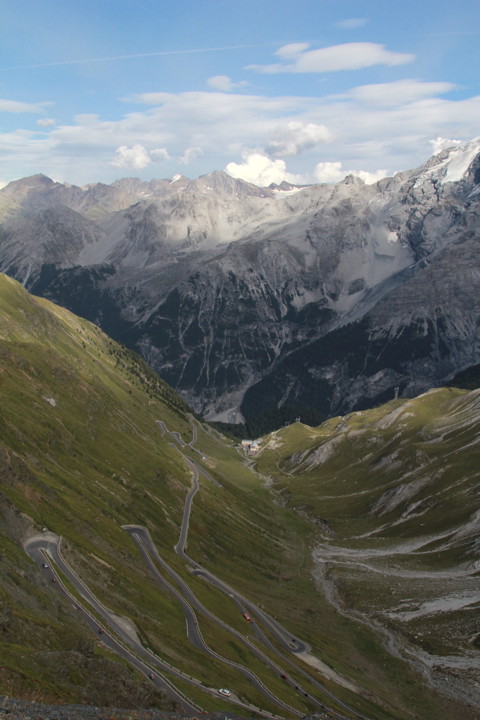 As I was hooning, that ribbon of highway;
I saw above me that endless skyway:
I saw below me that golden valley:
This road is freakin’ awesome!
(apologies to Woody) 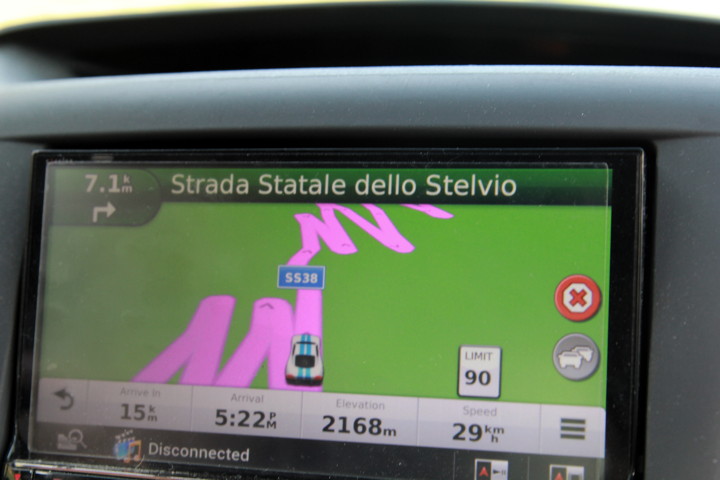 Squiggly lines ahead
Also, I don’t think my 2nd gear can hit 90 kph.

So instead of wasting an hour sitting in traffic waiting to go through the Brenner Pass tollbooths with no air conditioning, we took an extra two hours driving up and down mountains without anyone throwing up. My wife told me the views were fantastic. Maybe next time I’ll look. 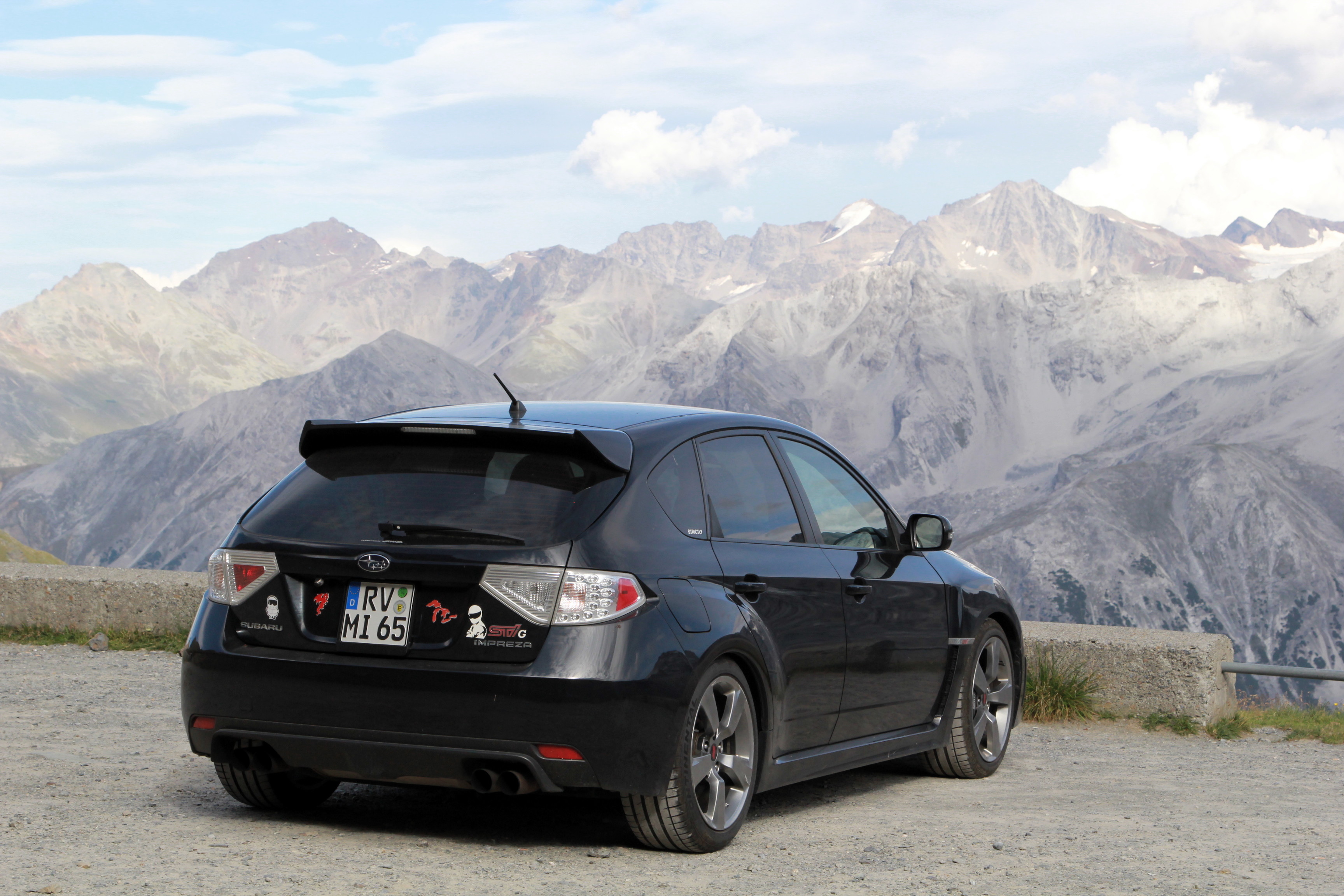 Let’s drive up and down a mountain. What could possibly go wrong?!

There Is No Substitute… for a Vacation Day