So I picked up up a new long block engine for my car the other day (more on that later). In the process, I learned something new about motor oils.

I’m one of those people that like to tweak things to make it just a bit better (translation: engineer). Overclock a processor? Extra firmware in my camera? Special ingredient in my chili?[1] Of course.

To make things worse, if you include numbers or big words, like zinc dialyldithiophosphate, dilithium crystals, or “100% of Shamwows are made in Germany,” I’m sold.

It’s all about getting an edge, being slightly better than normal, and maybe even getting an “unfair advantage.”

What I’m saying is: I like to “optimize” (and use lots of “quotes” when I write).

When I (eventually) got my car back, the shop mentioned that they used Joe Gibbs’ Driven Racing break-in oil to break the engine in. They also recommended the Driven Hot Rod oil for my regular oil change, preferably one with a higher viscosity. I had never heard of Driven Racing Oils, so I decided to investigate. 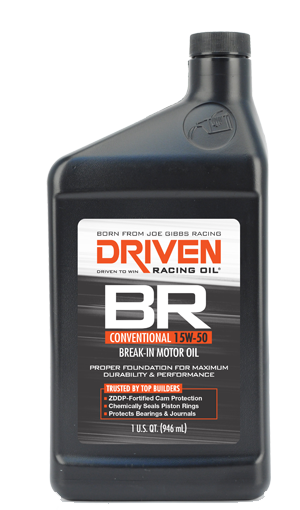 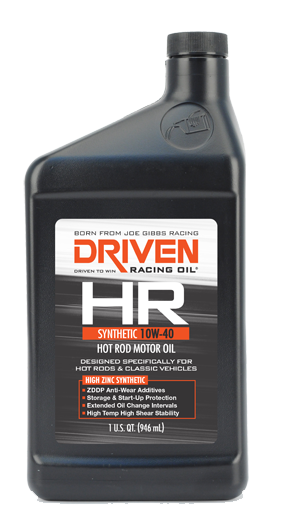 Now, I understand that engine oil is mystical for many people. There are people that worship at the altar of the 3,000 mile oil change. Some swear by synthetic oil. Some can’t drive without an air/oil separator.

And some may even know the hidden meanings in the API SN / ILSAC GF-5 / ACEA A1/B1 standards (these would be oil shamans).

If you want to dive into this oil-filled rabbit hole, I recommend going to the website Bob Is the Oil Guy. However, if you are really passionate about your oil lifestyle, I recommend not going there. There are people in the forums there that posts unsubstantiated claims. Some may even be misinformed. *shudder* What has the internet come to?

Z Is for Zed

So what’s the secret sauce in Joe Gibbs’ oil? It’s zinc dialyldithiophosphate, or ZDDP, or just zinc. Zinc has been an additive in engine oil for over 70 years, when it was first used in airplane engines to keep them flying. It coats the metal to reduce metal-to-metal wear. The break-in oil the shop used had more zinc additives and less detergents to increase wear protection. Zinc sounds fantastic.

Zinc is bad, however, for catalytic converters (we all have those in our cars, right?), so there is a trend for less zinc in modern oils. First they take the lead out of our gas, now zinc from oil. Where’s a grease monkey going to get his toxicity fix?

Another trend in oils is to make them thinner, less viscous. Wikipedia says fluid “viscosity is a measure of its resistance to gradual deformation by shear stress or tensile stress.” It can be tested by measuring how fast the liquid flows through a tube.

Remember when everyone used SAE 10W-40 oil? Those numbers refer to the SAE J300 viscosity rating where larger numbers mean more viscous (think: thicker). The first number (10W) is for the winter or cold viscosity, and the second number (40) is for the summer or hot viscosity. SAE 40 oil has a specific viscosity at 100°C, the typical engine operating temperature. It will also have a specific viscosity at a low temperature like at -30°C. So SAE 40 could also be referred to as SAE 40W-40 (but it’s not).

But don’t put it in your pre-2016 vehicle to get better gas mileage because they are not intended to be backward compatible. I’m assuming this new oil leaves a thinner oil film between metal parts, which wouldn’t be good if the engine isn’t designed for that.

In some dark corners of the internet, there are claims that these lighter weight oils may have a higher volatility, and will evaporate more easily in an engine when exposed to high temperatures (like the underside of a piston). This may result in higher oil consumption.

Volatility is defined in ASTM D-5800, and uses a Selby-Noack apparatus. The oil is heated to 150°C for a specific period of time, and the reduction in weight is reported. Back in the day, the limit for API SG was 25% weight reduction! From what I can tell, the Noack for the current API SN rating is 13%.

I tried to correlate oil weight to Consumer Report’s list of the top 30 vehicles which needed at least 1 quart of oil between oil changes. However, since oil change interval varies for these vehicles (e.g., 3,000 miles to 15,000 miles), I don’t know if I can use this list to make that correlation. Besides, that would require thinking and stuff, which is not allowed on the internet.

The pistons in my new engine have a slightly looser tolerance than stock, so the shop recommended going from SAE 5W-30 to a “thicker” SAE 10W-40. Just like the good old days. (Manly men with manlier motors would probably step up to SAE 15W-50.)

(As a side note, Driven Racing Oil mention the storage protection in their oils. I may switch my Porsche 944 Turbo to this oil, as I barely drive it enough to re-fill the gas tank once a year.)

I’ve used Mobil 1 synthetic oil in all my cars for over 25 years. I believe it’s not really necessary to use synthetic, and that regular oil change is more important. But I use it for the peace of mind, and the hope for the infinitesimal chance that it makes my car go just a bit faster.

Now that I’ve opened this Pandora’s can of oil, those hopes have been dashed. Regular Mobil 1 has apparently become a hydrocracked Group III oil, which is based on mineral oil.[2] To some this is not a true synthetic. Life no longer has meaning.

(A friend at worked once asked me why Hope was even in Pandora’s Box. His answer: Hope is the worst of all evils. My friend is a software project leader.)

What I’m really looking for is a Group IV PAO (polyalphaolefin) based stock (or possibly even the newer mPAO—metallocene polyalphaolefins). Based on some googling/binging/ducking, possible true PAO synthetics are:

Red Line and Royal Purple brands might be either Group IV or Group V (“other,” or anything not in Groups I-IV). But to be honest, I don’t know how accurate this list is as most manufacturers do not divulge their formulation. A consumer will have a hard time finding out this information.

“Synthetics” as it applies to oil is actually even more complicated than this, involving base stock, additives, etc. My classification of PAO as synthetics is very simplistic. And if you read the oil companies’ marketing literature, you’ll be even more confused. In the end, it may not even matter.

(Note to self: check prices on gas chromatographs on Amazon.)

I know most human beings like change, as long as it happens to other people and not to themselves. If you have a favorite oil, you can probably go ahead and keep using it, as long as it meets your vehicle’s recommended oil specifications, and you maintain a regular oil and filter change schedule.

For the people who take their cars to the race track, who are looking for that extra edge, or maybe want that unfair advantage, well, you’re already hopeless. Just keep buying the most expensive stuff out there. I’m sure it will make your car faster.

This is basically a marketing video, but it’s all technical-ly and stuff, so I’m embedding it. However, note that I used to put Slick 50 in my car.


I would totally buy oil from a dude named Lake Speed, Jr.

Go to these places to learn more. I can’t really vouch for them, though.

[1] This is hypothetical, or a “lie,” since the only recipes I know involve cooking meat over fire.↩

[2] Back in 1999, Mobil complained about Castrol’s use of the term synthetic. Castrol had changed their formulation and started using hydrocracked based-oil in their synthetic oils instead of PAO. In general terms, hydrocracking involves heating the oil until it becomes a gas, separating out the impurities, and introducing hydrogen as it is returned to a liquid. This makes a cheaper oil than one based on PAO.

Castrol won the case, so now a hydrocracked Group III based oil can be sold as synthetic. There are claims that Mobil eventually switched to this more profitable formulation as well.↩

(I learned something new. And also, Oil’s Well That Ends Well.)